I was scrolling through Facebook recently, when a certain post drew me in. Tom Hiddleston reading a bedtime story for CBeebies. I’ve been enjoying the new Loki series, so this was an instant “Yes, please!” Being a brilliant actor, it’s no surprise that Hiddleston is an excellent, expressive reader, and both Joss and I enjoyed the story. But it made me wonder, which other read-aloud videos are worth watching? I’ll share some of our favorites, as well as one recommended by a member of TulsaKids’ TulsaParents Facebook group.

Storyline Online is a great resource for finding engaging read-aloud videos. Professional actors read a favorite story, which is animated throughout the video. At the end, they explain why they chose the story. In this one, O’Dowd explains, “I chose this story because it illustrates how two people who come from very different backgrounds – the eater and the eat-ee – can come together in compromise. And decide that together, eating doesn’t need to take place at all, they can just be friends. Sometimes, you’re the eater. Sometimes, you’re the eaten.”

Anyway, the “Arnie the Doughnut” is hilarious to begin with, and O’Dowd does a fantastic job of highlighting the humor. Hence, it’s a favorite at our house.

Another Storyline Online find. “Enemy Pie” is a great choice if your child is having trouble with a peer. In it, the protagonist doesn’t want to play with neighbor Jeremy Ross because he’s an “enemy.” His dad explains that the way to get rid of enemies is to bake enemy pie. But what is enemy pie?? The dad explains to his son that the final step in making enemy pie is for the kid to spend a whole day being nice to Jeremy Ross. By the end of the story, of course, the two boys are friends.

I don’t know all the legalities of recording read-alouds on YouTube etc. I trust Storyline Online because it’s a big operation, same with CBeebies. But I’m going to go ahead and recommend this because Joss listened to them at school and kept talking about them. The “Little Spot” books are a series by Diane Alber that helps kids identify feelings. Here is “A Little Spot of Peace.” There are other “Little Spot” videos available on YouTube as well.

Thanks to Jessica R. for recommending this one! Joss said, “Oh, I’ve seen this before and don’t need to see it.” But as soon as I hit the “Play” button, he changed his tone. “Zombies Don’t Eat Veggies” is a fun way to promote veggie positivity, if you have any picky eaters. But more than that, it’s a story about a boy who feels different from his family, and learns to stick up for himself. He moves from wondering, “Am I really a zombie if I only like to eat vegetables?” To telling his parents, “I may like to eat vegetables, but I’m still your son, and I’m still a zombie.” Very sweet, very well read, and just a touch gory 🙂

“Have you ever felt invisible before?” asks Tom Ellis at the beginning of this read-aloud. “Like nobody can see you? Like nobody cares?” As you can guess from this intro, “The Invisible” is not a humorous story. It tells about a young girl whose family are forced to move to a different part of town due to financial reasons. A part of town that feels “exactly how she felt: cold, sad and lonely.” Isabelle feels invisible as she walks along, but her invisibility allows her to see other invisible people: the old lady planting flowers, an old man sleeping on a bench, a young immigrant boy. Isabelle decides to help the other invisible people around her, and in doing so, brings visibility and joy to her new community.

Sadly, I don’t see this video on the official CBeebies YouTube channel so am not going to post the link here. But go to YouTube and search “cbeebies bedtime story tom ellis,” and you should be able to find it. It’s really sweet, and I can see it giving kids some good food for thought as they settle down for bed. Plus, I’ve been a fan of Tom Ellis since seeing him in “Miranda,” and now that he’s been in “Lucifer,” this is just a treat 😉

Here’s a CBeebies Bedtime Story marathon, if you need that 🙂

I would be remiss not to remind you that Tulsa City-County Library has many storytime videos on their YouTube Channel. Although the library hasn’t returned to in-person storytimes, they’ve provided virtual storytimes throughout the pandemic. Here’s a storytime video with Ms. Tori, Children’s Library Associate at Glenpool Library. She’s one of the librarians who writes our monthly Books column in the magazine, so it was fun to “meet” one of our writers in this context! 🙂 But in addition to reading, library storytimes include fun songs and other activities.

Oklahoma Aquarium has also been doing online Aqua-Tots storytimes during the pandemic. These can be found on their Facebook page.

And at the start of the pandemic, Tulsa Zoo initiated an online Zoo School. They do now have weekly, in-person storytimes every Wednesday morning at Zoo’s Elephant Pavilion (10 a.m.). But you can watch their past Zoo School storytimes on their YouTube channel. Here’s a page linking to all of the videos: https://tulsazoo.org/kids/. And since bats are one of my favorite animals, enjoy this batty storytime 🙂

Just wanted to throw in a plug for Joss’s current favorite book, “Class Picture” by Noé Carlain and Hervé Le Goff. We bought this book for his Kindergarten teacher at the end of the year. She read it to the class, so of course afterwards he wanted a copy of his own. I promptly forgot about it. However, we were at Eleanor’s Bookshop the other day picking out travel books, and he saw it. So we ended up with a copy, and have read it several times a day since. It’s very simple, but hilarious – classes of various animals trying to take class pictures, and everything that could go wrong. 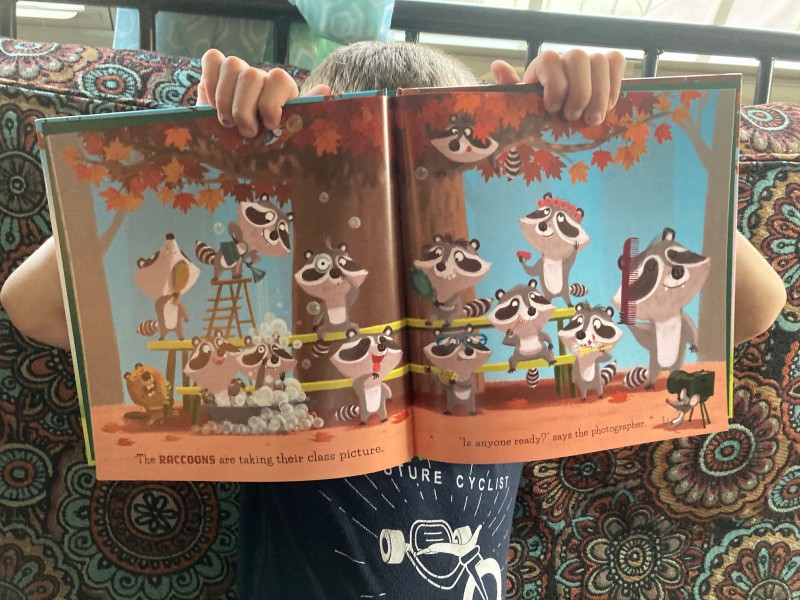 Does your child have a favorite read-aloud video? Feel free to share the link in the comments! And thanks in advance! 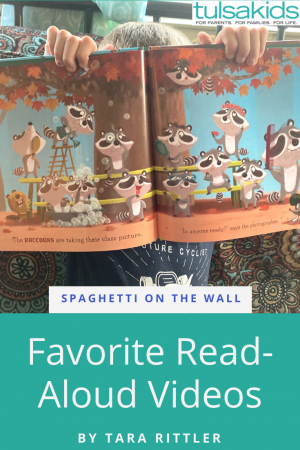