The National Parents Union (NPU) recently released its “Family Bill of Rights” to what? The nation? The media? I don’t know. I do think it’s important to understand the beginnings of an organization that calls itself a “grassroots activist” organization because it may be coming to Tulsa. NPU is funded by the Walton Family Foundation, which can hardly be called a grassroots activist organization. The Waltons support charter schools, vouchers and privatization of public education, and the NPU is just another nontransparent “organization” to further those ends.

The NPU is the “parent” branch of the larger school privatization training structure that the Walton Family Foundation and other philanthropic organizations have been building for a decade or more. A May 13, 2020 blog by Maurice Cunningham, a MassU professor writing on the www.masspoliticsprofs.org site, exposes the claims made by the Walton Family Foundation-sponsored National Parents Union. Dr. Cunningham, in “National Parents Union: Not a Union, Not National, Not About Parents,” researches NPU’s membership and finds that it has few actual parents or parents’ organizations.

There are nineteen organizations I identified as ‘civic’ and some I could further identify, for instance civic/Latinx, civic/civil rights, civic/autism, etc. Within the civic groups that could be identified, there were four I identified as civic/parents. The parent groups are Connecticut Parents Union, Minnesota Parents Union, New Jersey Youth Justice Initiative at newjerseyparentscaucus.org, and Massachusetts Parents United.

Of the four parent groups, Massachusetts Parents United is emblematic since its CEO Keri Rodrigues Lorenzo is also the CEO of National Parents Union. But MPU is not a grassroots parents’ organization either. It is a privatization front underwritten by the Walton Family Foundation ($866,000 in 2017-2018).”

The Walton Family Foundation website says, “The foundation has also worked to build a pipeline of talented principals and teachers who are ready to work in U.S. public schools and provide students with the opportunities they need to prepare for college and careers. This includes support to programs like Relay Graduate School of Education, Teach For America and The New Teacher Project (TNTP).”

Research by Ken Zeichner, University of Washington, and published by the National Education Policy Center at the University of Colorado, Boulder, warns against “alternate routes” of teacher preparation represented by Relay Graduate School of Education, Teach For America (TFA) and The New Teacher Project (TNTP).

While he admits that teacher education at colleges and universities can be improved, he cautions that fast-track teaching and school administration credentials will lose the professional credibility “that pairs academic degrees with professional training” like those found in other professions such as doctors, lawyers or accountants. When teachers are no longer regarded as professionals, if follows that pay will go down, as will quality. Teacher turnover will become more of a problem and inequities in the quality of education between the wealthy and everyone else will be exacerbated.

With the substantial financial backing of “venture capitalists, philanthropy and the U.S. Department of Education,” Zeichner says these “stand-alone” private, edu-prep entities such as Relay, TFA and TNTP have gained momentum.

“While many advocates assert that independent programs are bold, innovative and successful in accomplishing their goals,” Zeichner writes, “the analysis here demonstrates that such claims are not substantiated by independent, vetted research and program evaluations.”

The shift to quick training has happened quickly, and high-poverty communities are the most impacted by these minimally trained teachers and administrators. Research conducted by four separate entities, including the American Educational Research Association and one sponsored by the U.S. Department of Education could find nothing to support that the stand-alone programs were effective. While the programs themselves claim to be effective, that’s like a pizza restaurant claiming to have the the best pizza in town.

Zeichner writes, “Relay, for example, has proudly proclaimed that faculty member Doug Lemov’s classroom management strategies for ‘Teaching like a Champion’ are the core of its curriculum. However, Lemov’s strategies are based solely on his own observations and conversations with teachers and administrators in various charter schools that he claims are high performing. By any reasonable standard, the assertion that Lemov’s strategies represent ‘best practices’ does not possess the kind of rigorous scientific evidence-based validity that is being called for in teacher education programs.

Thus, internal claims and analyses add little or no evidence of these programs’ effectiveness.”

There is much more to a successful school and a successful teacher or administrator than raising standardized test scores. If that is the only measure of a child’s worth, then the U.S. has a sad future ahead. Almost anyone could take a classroom of 20 kids, provide test prep for a few months, and see “growth” in the students’ standardized test scores. But, is that teaching? Is that effective teacher training? Is that the “choice” the National Parents Union is advocating? Who does the NPU advocate running our public schools? The Waltons or the community?

Zeichner writes, “Given the enormity of this prospective shift, policymakers should consider carefully the extant evidence about the nature and impact of different pathways into teaching, including the entrepreneurial, stand-alone programs that advocates proclaim to be the future of teacher preparation. This consideration is particularly critical because, to date, these new alternatives focus almost exclusively on preparing teachers to teach ‘other people’s children’ in schools within high-poverty communities—not on public school teachers in advantaged communities. Therefore, their entry into the field raises important questions not only about effectiveness, but also about equity.”

While the quick alternative teacher training programs do not have peer-reviewed research to back up claims of effectiveness, there are researched methods of high-quality programs, which include “extended clinical experiences…and curriculum that is grounded in knowledge of child and adolescent development, learning, social contexts, and subject matter pedagogy, taught in the context of practice.”

Zeichner recommends that state and federal monitoring policies should be in place to avoid creating a stratified system where teachers serving in low-income communities receive “technical, narrow training on how to implement a defined set of curricular, instructional and managerial guidelines,” while those in more “economically advantaged communities complete programs in colleges and universities to become professional educators.”

Just as the alternative pathways to teaching have skipped over any rigor, research or oversight by real universities, the National Parents Union has skipped over real parents. The NPU is a Walton-created and funded organization that cloaks itself in equity and grassroots advocacy when it is exactly the opposite. It was put in place to be the parent arm to support vouchers, national charters and privatization. There are no quick fixes.

As Dr. Cunningham says, “National Parents Union isn’t a union. It isn’t national. And it isn’t about parents. Then what is it?

To answer that question, follow the money. (More on this soon). And the money leads to the Waltons, Gates Foundation, City Fund (billionaires John Arnold and Reed Hastings), and most likely, from Charles Koch.

National Parents Union is a wolf in sheep’s clothing.” 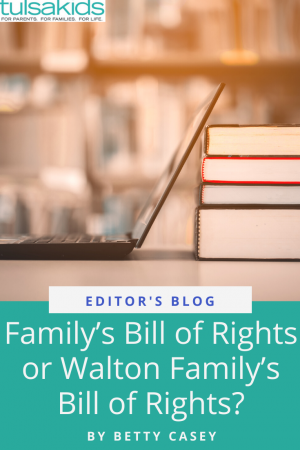