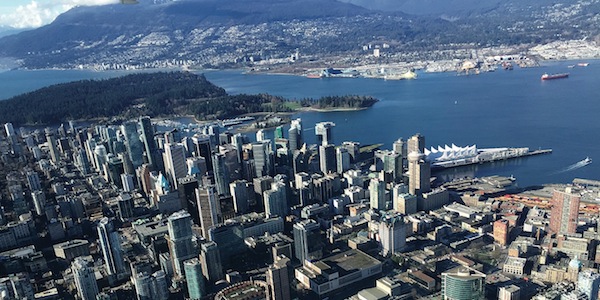 Purely from a visual standpoint, Canada’s Vancouver, British Columbia, is one of the most incredible cities I’ve seen to date. It is a majestic metropolis where blue sea and snowcapped mountain landscapes are juxtaposed with mostly glass skyscrapers, waterfront developments and a plethora of parks. The city is richly adorned with sandy beaches and dense forests, too. Every vista from most any vantage point is stunning.

The vibe is laid back, despite Vancouver’s sophisticated and cosmopolitan nature. Ethnically diverse citizens and visitors from around the globe harmoniously co-mingle in this great outdoor playground. The temperate climate, which perfectly suits centuries-old trees growing tall in the rainforests, also enables people to spend lots of time outside.

Whether exploring the surroundings on foot, by bike or ferry or on a seaplane above the fray, there’s much to discover. An added bonus is that simply living (and breathing) here seems easier than in other cities.

Vancouver’s proximity to nearby Whistler, an Olympic Village and ski resort only two hours away, was my initial reason for choosing the city as our Spring Break 2016 destination. The original plan was to take day trips and ski for at least half of our weeklong vacation, using downtown as base camp. Other skiing options closer to the city are Grouse and Cypress Mountains, which were on the docket. One day at Whistler was grand but, by unanimous vote, the lure of exploring Vancouver overshadowed further slope time.

It’s difficult to narrow down my personal favorites list, but if you and your family do nothing more than the following activities during your stay, I feel confident that you’ll become as excited about Vancouver as I am.

Before doing anything else, walk around the waterfront, simply paying attention to the views. Stroll around the dazzling downtown and visit the little neighborhoods, including the Gastown  district with its pretty streetlights and happening restaurants. Notice the people, happy and relaxed, operating at a slower pace. Listen to the sounds and watch for birds, especially bald eagles. Take lots of photos because you may want to blow one or two up for all to admire. 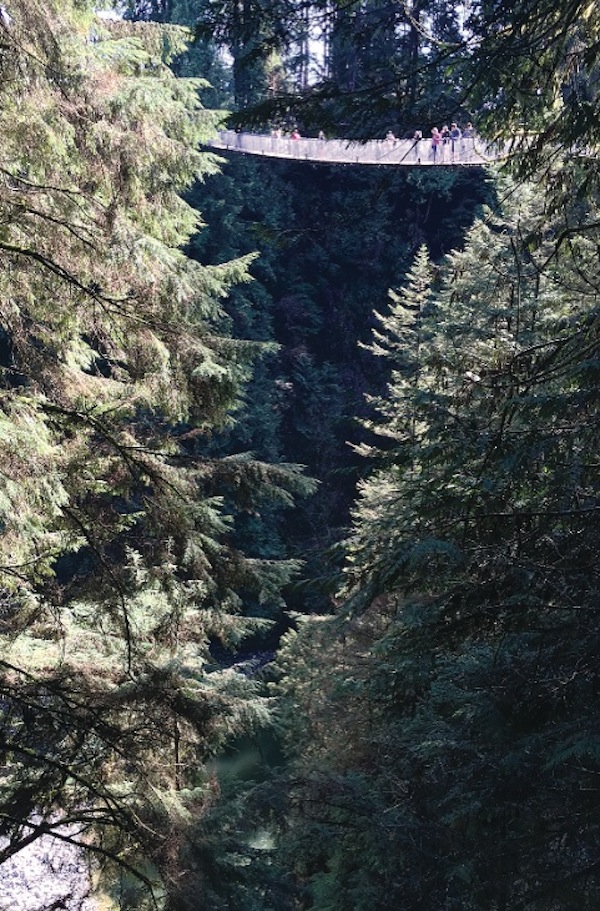 250 feet high above the river below and 460 feet across the canyon, the Capilano Suspension Bridge will thrill all. Since 1889, folks have been visiting this North Vancouver attraction. To add to the fun, enjoy the Swiss Family Robinson-esque Treetop Adventures, a relatively new activity on the west side of the suspension bridge. Each of seven footbridges is suspended roughly 100 feet above ground and span from one mature Douglas fir tree to another. Lastly, after successfully challenging your troop to tackle the Cliff Walk, a stop at the onsite homemade fudge shop might be a great bravery reward for everyone.

Off To Stanley Park We Go

One of the largest parks in North America and one of the highest ranked world-wide, Stanley Park is a magical retreat. Jutting out along the peninsula, the park is home to ancient fir, cedar and hemlock trees that sweep the sky (at up to 250 feet tall), a world-class aquarium (featuring white beluga whales),  and sandy beaches for sunning and swimming. Surrounded by Vancouver Harbor and English Bay, the 1,000+ acre mecca is fringed by a 5.5 mile, man-made sea wall, built for walkers, joggers, skaters and bikers to enjoy. Overlooking the sea where ships and vessels come in is the Teahouse restaurant, serving up seafood and wine to supplement unbeatable sunset views.

If you choose to head up to Whistler to ski or simply visit the Olympic Village, this 75-mile drive along the coast from Vancouver to Whistler is worth its weight in gold. You’ll want to take a thousand pictures because the views around each curve are simply jaw dropping and the vistas of glistening Howe Sound edging up to rocky cliffs with mountain peaks in the distance are breathtaking. It’s no wonder that National Geographic calls this one of the most scenic routes the world over.

Shown multiple times each day in the architecturally impressive Convention Center at the end of a pier, the “Flyover Over Canada” experience is extraordinary. Just hold on tight while strapped into your seat (that moves in a half-dozen directions) and prepare for a simulated flight over Canada’s natural beauty, including close encounters with the Colorado Rockies with a final landing in Vancouver, of course.  Super cool special effects such as mist and wind further enhance the feeling that you really are in flight.

The US Dollar Works Wonders

Remember,US currency goesfurther in Canada. In fact, the exchange rate in September 2016 is averaging around $1.32 Canadian dollar to $1.00 US, meaning it’s almost 1/3 less expensive to make purchases there. Transportation, hotel accommodations, restaurants, shopping and entrance fees at exhibits, parks and museums are all a bargain, in many cases. With the family in tow, savings really add up.

By now, it’s apparent that Vancouver “had me at hello.” The question is, will it be a love at first sight experience for you, too?