The Tulsa School Board will be hearing recommendations on four school closings tonight, ostensibly to save a couple million dollars toward the $20 million deficit facing TPS. I can’t help but wonder how the district knows what the school enrollment will be at those schools under the new open enrollment plan where students can enroll at any school. Has TPS worked to make these schools attractive to families from other schools?

Most parents, teachers and child development professionals know that instability is bad for children. Not only are the families disrupted when the schools close, the schools that are absorbing new students are also disrupted. And those ripples are felt beyond the district.

Nancy Bailey, Ph.D., special education teacher and author of “Losing America’s Schools” and “Misguided Education Reform,” writes a blog about public education. She recently posted an essay written by a teacher in a suburban school district. Does disruption breed innovation? Can pitting schools in competition with one another work when schools and student populations are not equal to begin with? The three points the teacher makes will sound familiar to TPS parents as will journalist Bill Moyers’ description of corporate reform. He is defining a “portfolio district” where schools open and close based primarily on standardized test scores and children are “customers,” not students. The district is meant to function like a stock portfolio.

Here is the teacher’s essay as printed in Nancy Bailey’s blog.

Who remembers when change was slow and steady in school districts, because they knew children needed stability and predictability?

Who remembers when public schools were a valued public service for the greater good of the country?

Who remembers school before corporate education reform? Not sure what that is?

The following excerpt is from Bill Moyer’s blog:

The “reform” movement is really a “corporate reform” movement, funded to a large degree by major foundations, Wall Street hedge fund managers, entrepreneurs and the US Department of Education. The movement is determined to cut costs and maximize competition among schools and among teachers. It seeks to eliminate the geographically based system of public education as we have known it for the past 150 years and replace it with a competitive market- based system of school choice — one that includes traditional public schools, privately managed charter schools, religious schools, voucher schools, for- profit schools, virtual schools and for- profit vendors of instruction. Lacking any geographic boundaries, these schools would compete for customers. The customers would choose to send their children and their public funding wherever they wish, based on personal preference or on information such as the schools’ test scores and a letter grade conferred by the state (based largely on test scores).

Some in the reform movement, believing that American education is obsolete and failing, think they are promoting a necessary but painful redesign of the nation’s ailing schools. Some sincerely believe they are helping poor black and brown children escape from failing public schools. Some think they are on the side of modernization and innovation. But others see an opportunity to make money in a large, risk- free, government- funded sector or an opportunity for personal advancement and power. Some — a small but important number — believe they are acting rationally by treating the public education sector as an investment opportunity

Here are the 3 signs that your suburban school district is being affected by corporate education reform ideas:

Where do all of these ideas come from? Well, many of them are inspired by a professor at Harvard, Clayton Christensen. Read this assessment of “Disruptive Innovation”.

One of the shibboleths of the corporate reformers is their belief in “creative destruction,” “innovation, and “disruption” as an end in itself. These ideas justify their efforts to tear apart traditional public school systems, replace experienced teachers with inexperienced youngsters, close schools, and experiment with charters, vouchers, and anything else that will destroy the status quo. To be sure, some are in the school reform business to make money, but others see themselves as heroes of a movement that sees itself as blowing up “failing schools” and forcing fresh innovations into a stagnant sector of the economy…

In education, we have seen the dogma of disruption in the policies of Arne Duncan, the Bloomberg administration of education in New York City (with its focus on closing schools and opening schools and closing the schools it opened), the Rahm Emanuel model (closing 50 public schools on the same day), the Broad Foundation, the Gates Foundation, the Walton Foundation, and business groups. They scorn incremental change and pursue the disruptive idea–like closing schools, the Common Core, federally funded tests–that will shake up schools across the nation with a series of bold and experimental strokes.

It looks different in the suburbs than elsewhere because higher standardized test scores correlate to family income. They couldn’t fail our kids like they did in urban and rural areas, so they turned to disruption.

Corporate education reform makes bedfellows of neoliberals and conservatives, alike. President Obama’s Secretary of Education, Arne Duncan, is a big fan of corporate education reform. I read he even wants his old job back if the opportunity arose. President Trump’s Secretary of Education, Betsy DeVos, hasn’t been replaced because she is doing an excellent job of destroying public education.

Do you think your community and schools need disruption to be successful?’

By Teacher Anonymous who could be teaching in any suburban school across the country. 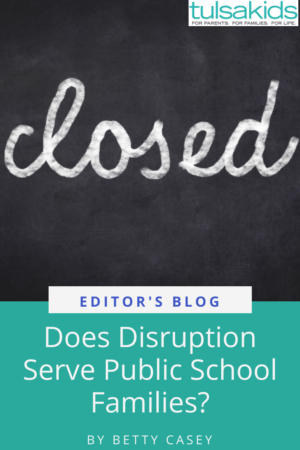