I’m late to the game in blogging about the Legislature’s latest shenanigans to destroy Oklahoma’s public schools. If you’ve ever had to buy a new computer, have everything transferred from the old one to the new one and then also do life in the meantime, you know how my week went last week.

Before we get to HB 2078 and SB 783, it appears that the Oklahoma State Board of Education is doing a little giveaway of its own. The board voted 4-3 to funnel some state funding and local taxes to charter schools.

State Superintendent Joy Hofmeister criticized the move, issuing a written statement that said, “Today’s board action circumvents the will of the people of Oklahoma and the state legislature by unilaterally determining how public education is to be funded. I fear this action knowingly violated Oklahoma statute and the Oklahoma Constitution.”

The statement continued. “There are serious consequences to this unexpected vote, the most obvious of which is Epic and all statewide virtual charter schools will now receive millions of local dollars from ad valorum funds that are assessed to construct and maintain public school buildings. Local tax revenue will be redistributed. This change is likely to have a seismic effect on school funding across the state, the ramifications on schoolchildren are yet to be fully understood.”

What happened to that $11.2 million of our tax dollars that Epic Charter Schools owed based on an audit by the State Auditor and Inspector’s Office? According to a Tulsa World article by Andrea Eger, “…$125.2 million of the $458 million allocated to Epic Charter Schools for educating students the past six years was found to have ended up in the coffers of Epic Youth Services, a for-profit charter school management company that has reportedly made millionaires of school co-founders Ben Harris and David Chaney.”

So, the State Board is going to reward them with more tax dollars? It’s questionable whether charter schools are even public schools. They have their own unelected boards and their own superintendents or head administrators. You, the taxpayer, do not have a say in how the schools are run. You cannot elect the board members or speak at board meetings. Charters don’t have to take every kid who comes to them. They can limit class sizes. They don’t have to follow the same regulations as public schools. You and your children may not have the same rights as you would in a public school. Peter Greene, a retired teacher, who writes an education column for FORBES, outlines some of the differences in this article for FORBES.

If you’ve stayed with me this long, I’m getting to the two Legislative bills. The Open Transfer Bill, HB 2074, seems innocent enough. What could be wrong with allowing families to transfer their kids to different schools any time throughout the year? Think about it. Will transportation be provided for kids who are transferring to other schools? Will the other schools have room for kids who want to transfer in? It sounds like a logistical and administrative nightmare in terms of record-keeping and tracking students.

Rep. Melissa Provenzano, D-Tulsa, said HB 2074 “…will keep the transfer window open all year long – making effective hiring and course planning practices a significant challenge. Additionally, the language for this legislation as well as for the funding formula bill (HB 2078) which could destabilize the way we fund schools, was put into the bill less than an hour before lawmakers voted, which leaves no time for review or public input.”

She goes on to say, “We have received reassurances that proposed changes to the funding formula will not lead to budget cuts…These reassurances are being made while there is also talk about taking money away from public schools for having ‘ghost students.’ There are no ghost students. This is a complete misrepresentation of how the public school funding formula works and why we use a three-year average.” (okdemocrats.org/dems-call-for-accountability-transparency-in-education-policy)

The democratic promise of public education is being threatened across the country. It is useful to look at other cities and other states to help us understand what may be happening in Oklahoma. Florida, under the leadership of Jeb Bush’s education reforms, is a cautionary tale. Billy Townsend, a former Florida school board member in Polk County, FL, has written a series of articles about school reform in the state. Some of his observations may sound familiar. You can read them here: billytownsend.substack.com/p/jeb-crow-pt-5-reformers-you-long.

Do inequities in public schools exist? Absolutely. But having schools and families fight for whatever lean resources are thrown their way doesn’t solve the problem of poverty and inequity. Creating funding chaos does not solve the problem; it merely exacerbates it. Competition may work in business, but it doesn’t work in education. Schools don’t exist in a vacuum, somehow sealed off from the surrounding society. Children are not commodities or data points. They come from families, communities and cultures. Providing for the unique needs of children where they live, in their neighborhoods, where every school is a good school, should be the goal. We shouldn’t give up on the democratic ideal of public education and neither should our Oklahoma Legislators. 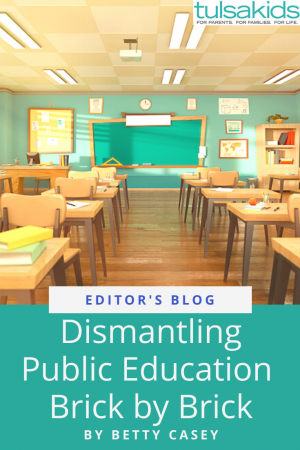