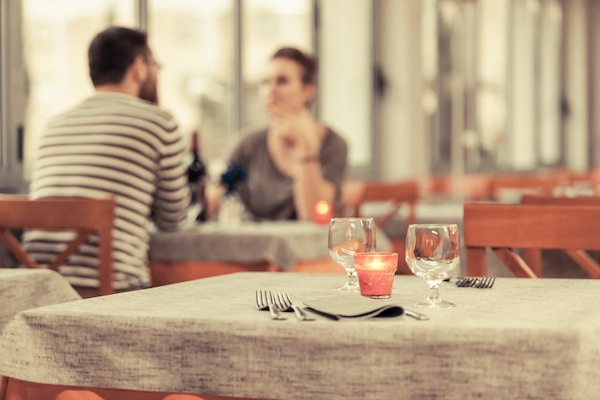 Last week, I wrote some practical guidelines about dating post-divorce. This week I’m taking a look back at my dating experience as a single mom. This article was first published in Tulsa Kids in 1992.

When I married, I assumed I had left the world of dating behind at the altar with my vows.  At 34, after ten years of marriage, followed by a divorce, I’m nervously dipping a toe back into the choppy waters of dating. In my younger years, I was fairly confident I had mastered the rituals and routines of dating but now I’m out of practice and don’t even know where to begin.

Some of Murphy’s laws of dating never change: the date I’m least interested in is the most persistent suitor and the one I desperately want to go out with finally calls and I have the flu. Or worse, I’m out on a date and after a delightful one hour post dinner conversation, I excuse myself to the ladies room and discover it was actually the glob of spinach stuck between my teeth that he found so mesmerizing.

But some things do change. Being the mother of two pre-school children has a definite impact on my dating life. Just the mere mention of the word children has sent several seemingly interested men running for the nearest exit, suddenly remembering an appointment for a root canal. The prospect of dealing with a four and a five year old tends to weed out the weak of heart.

After many ill-fated beginnings, I finally meet a man with whom I share a mutual attraction, common interests and goals. He’s passed my screenings; he has a job, doesn’t live with his mother and his picture isn’t found on the “most wanted’ poster at the post office. Most promising, he hasn’t pulled a Houdini when I drone on about my charming daughters. We decide to go on a date. Sounds easy enough? Dream on, that was B.C., Before Children!

The logistics involved in planning a date A.C, after children, rival those encountered by the Secret Service planning a Presidential trip to the mid-east. After being turned down by ten babysitters, I finally find one that agrees to watch my little darlings as long as I agree to exorbitant rates and have a fully stocked refrigerator. A weak negotiator, I meet her demands. What can I say, my kids love her and I really, really want to go on this date!

Getting ready for a date B.C meant simply getting dressed and putting on a little make-up but now it is a marathon of preparation. Straighten up the house, feed the kids, attempt to dress and groom myself while simultaneously refereeing a fight over who has the prettiest hair and explaining to the four year old why the cat cannot take a bath with her!

The babysitter arrives and I show her proof of the stocked fridge, give her instructions, emergency numbers and a down payment, rescue the terrified cat from the tub and attempt to calm the child who has just received an unsolicited haircut from her sister. Time to take one last look in the mirror, give several rounds of sticky kisses and hugs (there goes the hair), and I’m out the door. No need for curfews in this A.C era of dating, I’m exhausted before the date begins. I’m only hoping I don’t snore in the movie!

Unbelievably, the date goes well and is followed by many more. After about 6 months of dating, I am excited to realize this is showing signs of becoming a relationship! I’ve done my homework, meeting his friends and family, checking out his place for any signs of him being a serial killer or worse, a hoarder. But before this goes any further, it’s time for the crucial test, meeting the children! Playing it safe, I plan a picnic in the park, a setting that doesn’t require keeping my angels quiet or monitoring their table manners. I think it’s best if we limit the concentrated amount of togetherness on the first outing between my kids and Mr. Maybe.

Of course, I’m stressed about this meeting. Will my kids like him? What will Mr. Maybe think of my kids? For months, he’s heard me extoll their virtues- their superior intellect, their perfect behavior, their budding artistic geniuses and their precocious wit. Did I perhaps exaggerate a bit?

Conveniently, I forgot a few inconsequential details. Did he really need to know that my precious babies occasionally have a little disagreement (the doctor says the scars will fade in time) or that my four year old has been known to scream for an hour over the severe injustice of a spilled juice box? Was it really important to mention that my five year old has a tendency to interrupt conversations and her incessant chatter can challenge any congressional filibuster?

I’m beginning to realize that in some strange ways, my children have taken over the functions and significance that my parents did in my first round of dating. I work my social life around their schedule, use them as an excuse when I want to go home early and sometimes sneak a guy in for a visit when they’re fast asleep. Looking back, my parents’ opinions about my dates were almost always correct and I think my kids are pretty astute at spotting character flaws. Or at least scaring away those not up to the challenge.

Back to the story, the day at the park wasn’t a total disaster but it also wasn’t the re-creation of “The Brady Bunch.” Not long after that day, Mr. Maybe began slipping in the polls and eventually became Mr. Definitely Not!

Flash forward- two years later, I began dating Mr. Right who met all my stringent criteria and not only survived meeting my kids, but loved them unconditionally.  He was worth the wait, we married and all lived “happily ever after”!