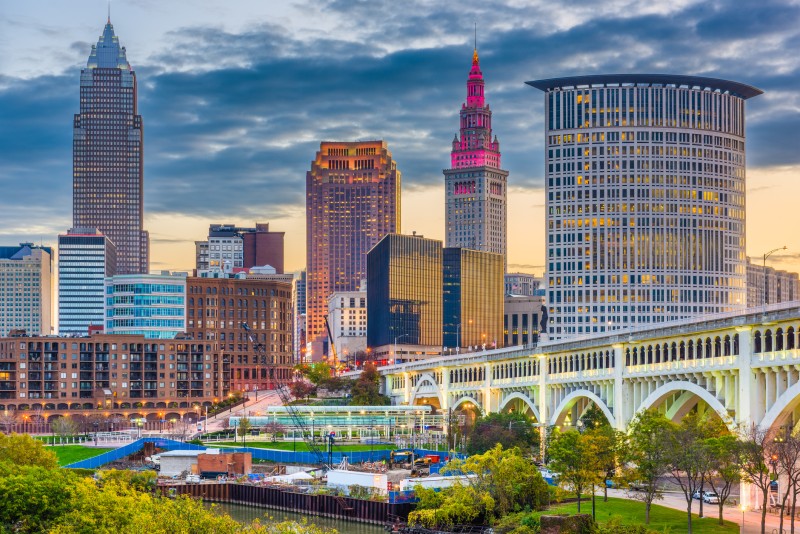 In my house, sports rule! The boys are either watching a big league game on television or tossing a ball around outside in preparation for their own game. And, when not in the throes of school sports, we are frequently attending live sporting events.

To see big time professional sports teams in action, we occasionally spend a few days in a major city like New York, Dallas, or San Francisco. But these economic times have us thinking twice because game tickets, hotel and transportation costs have become increasingly tough on our budget.

Recently (and accidentally), we discovered an attractively affordable option that will become a top choice for the future — Cleveland, Ohio.

I had never considered Cleveland as a desirable destination other than to visit arguably the world’s best amusement park, Cedar Point, in nearby Sandusky, Ohio. As fate would have it, a writers’ conference sponsored by Positively Cleveland (the city’s Conventions and Visitors Bureau), lured me there in June 2009, and I pitched the trip to my family, with the bait being a jaunt to Cedar Point and an outing to watch our favorite New York Yankees hopefully defeat the Cleveland Indians.

With that said, they were sold, and off we went on our adventure to unknown and unassuming Cleveland.

The Lay of the Land

Once the plane touched down, we easily made our way into the city, a mere 10 miles from the airport. Entering the happening downtown district, we became enamored by the city’s beauty with its historic buildings and modern skyscrapers clustered along the shores of spectacular Lake Erie. We also took note that several professional sports venues were right in the heart of downtown. We thought, “How cool is that?”

We checked into the Doubletree Hotel and leisurely walked the attractive streets to Progressive Field, the Indians stadium, for an evening of baseball, Cracker Jacks and hot dogs. Amazingly, we bought four grandstand tickets, had great seats, fed ourselves and had a grand time for under $100. Oh, and by the way, the Yankees won!

With baseball in full swing, Cleveland’s basketball and football franchises were gearing up for their seasons. And, when they kick in, it will be just as easy to walk to either of their venues from downtown hotels. The Browns football stadium is situated lakeside and the Cavaliers’ Gund Arena is a stone’s throw away from Progressive Field. So, checking out one of the oldest football franchises or witnessing the power and finesse of NBA phenoms LeBron James and newcomer Shaquille
O’Neal would be easy to do during another visit.

The Savings Add Up

Positively Cleveland’s partnership with Sports Travel and Tours offers some great football package deals. For example, a trip to see the Browns rival the San Diego Chargers on 12/6/09 starts as low as $250 for double occupancy at the downtown Hampton Inn and includes two nights/three days’ accommodations along with an upper level end zone game ticket, and some souvenirs (tax and gratuities included).

Tamera Brown, vice president of marketing at Positively Cleveland, says that tickets to see the Cavaliers range from a low $10 to $77. Visitors can check out the Cavs Flash Seats program, which “…is a spot where season ticket holders can exchange and/or sell tickets, even up to the minute the game starts.”

When comparing a visit to Cleveland versus comparable-sized cities such as Philadelphia or Boston, cost savings for lodging, dining and entry into area attractions can be a whopping 30 to 40 percent. Hotels, including the Embassy Suites, Renaissance, Radisson and Ritz-Carlton, are often significantly less expensive, yet offer the same level of service and quality you’d find elsewhere.

And, based on recent talks with Continental Airlines, the non-stop flight between Tulsa and Cleveland may be reinstated as the economy begins to improve, making travel time shorter than other cities that require a stop-over.

Since we had a car, a 90-minute drive to Canton, Ohio’s Pro Football Hall of Fame became a no brainer. Here, the kids spent hours challenging their minds with interactive videos, practicing on the outdoor playing field and checking out an enormous display of Hall of Famer memorabilia.

In addition to feeding our sports fanaticism, we also spent some of our free time at an array of other attractions. For one, there was the one-and-only Rock-n-Roll Hall of Fame, designed by world-famous architect I.M. Pei, and the hands-on Science Center, conveniently located along the lakefront area as well. And, then there was the trolley tour, the University Circle district with its collection of museums, and, of course, the theater district.

Cleveland was a positively rocking good time with more choices than we’d ever imagined. Our trip was an out of the park “home run” and we are eager to have a ball there once more.