Classrooms Should Not Be Receptacles for Fears

Schools often become the vehicle for stirring up divisiveness. Schools filled with our vulnerable and innocent children often become the battlegrounds of intensely emotional issues going on outside the school buildings. House Bill 1775 reflects that social battle. It is a racist bill that attempts to soften its message by pretending that teachers are making schoolchildren feel  uncomfortable or guilty for being white. The bill reflects the discomfort that many white, heterosexual males are feeling due to cultural shifts that they can’t control. By bringing their fears into the schoolhouse, they can cloak their racism, homophobia and misogyny under the guise of protecting children.

House Bill 1775, which, if you haven’t read by now, prohibits public schools and universities from teaching that “one race or sex is inherently superior to another,” and that “an individual, by virtue of his or her race or sex, is inherently racist, sexist or oppressive.”

The Oklahoma City Public Schools denounced HB 1775. All eight board members voted to denounce it, some calling it racist and cowardly.

Governor Stitt, who signed the bill into law, said, “We can and should teach this history without labeling a young child as an oppressor or requiring he or she feel guilty or shame based on their race or sex.”

Well, which kids should or should not feel guilty, oppressed or ashamed? Should it be okay for the LGBTQ student to feel shame so that the white, heterosexual male student isn’t made to feel uncomfortable? Should the Black student remain silent about experiences with racism so that the white student can remain guilt-free?

Think of historical events that you learned about in school. Slavery, colonialism, internment camps for Japanese Americans, Jim Crow Laws, Trail of Tears, Separate but Equal, immigration, the Tulsa Race Massacre, the Ludlow Mining Disaster, women’s suffrage – the list goes on and on. Did you feel any sense of shame, sadness, horror or other negative emotions when learning about these events? Probably. And you probably wouldn’t want to ever repeat this history. Rather than denying it, which is easy, current movements such as BLM are asking us to face it and actually take action for change. If we only learn about the events without discussing what they meant in the past and acknowledging what they mean today, then we are missing the point of history.

Classrooms should be safe places to discuss hard topics. They should be places to wrestle with the ugly parts of our history. I know when my children felt discomfort or guilt, that would indicate a time of recognition and change.

Change rarely occurs from complacency and comfort. Positive change grows out of discomfort with the status quo. Rather than taking that power away from our children, we should be giving them the power to create an ever-better future. We should trust our children. House Bill 1775 is a reactionary bill based in fear. Our schools should not become the receptacles of our fears, but the ladders to our understanding and growth. 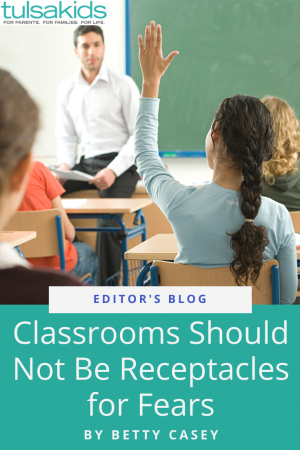