One of the best things about living in the age of streaming video is that it’s easier than ever to plan your family TV and movie nights. Back in the ‘80s, we were relegated to watching whatever was on – commercials and all. But these days, you can turn family watch night into a full-scale event that’s every bit as fun as an evening at the theater or drive-in. It’s also a great chance to introduce your kids to some movie classics and increase their pop culture literacy.

To transform your living room into the ultimate at-home theater this summer, check out some of our favorite DIY family watch parties and turn TV time into an event your whole family will look forward to! Here’s a movie for every week this summer and where to watch it:

Sure, the J.J. Abrams Trekverse is a little divisive among the Trekkie fandom. But it’s still a fantastic movie, and it’s a great way to introduce a whole new generation to the concept of the Federation before you rope them into binging literally every season of TNG on Paramount.

Where to watch: Paramount+

What to wear: Red shirts, but be careful

What to snack on: Veggies. Vulcans don’t eat meat.

Everyone needs to see this movie at some point, and your kids will thank you for it – if not now, then one day. And once you’ve finished watching, you can go back and impress your teens by syncing “Dark Side of the Moon” up with the third lion’s roar.

What to wear: Braids and red shoes

What to snack on: Green Jell-o and lollipops

“The Goonies” is a good old-fashioned adventure that finds a group of friends on a treasure hunt to find real-life pirate booty. And any Gen-Xer worth their salt will tell you it’s one of the best teen films ever made.

Where to watch: Tubi

What to wear: A letter jacket

What to snack on: Ice cream, many flavors

When Joe Banks (Tom Hanks) gets diagnosed with a fatal brain cloud, he sets off to throw himself into a volcano. This isn’t the highest-rated film on Rotten Tomatoes, but it’s a cult classic with a small but devoted fandom and trust us, you need to join them.

What to wear: An absolutely bonkers hat and a tropical shirt. Maybe bring a suitcase.

What to snack on: Orange soda pop and tropical fruit

This movie has everything: romance, adventure, ROUSes, and Cary Elwes looking utterly dreamy while dressed in all black.

What to wear: Castle-storming attire. Interpret as you wish.

What to snack on: Peanut butter cups. Get it? Buttercups!!!

It’s hard to make it big in Manhattan, but if anyone can, it’s Miss Piggy and Kermie. When the Muppets meet Broadway, anything can happen. And there will most likely be lots of chickens involved.

What to wear: Green. But it ain’t easy.

What to snack on: Diner food.

A surprisingly funny and emotional film, “Casper” finds a young Christina Ricci and her grieving dad unable to move on after her mom died. Thankfully, she meets Casper, who knows a few things about being dead.

What to wear: Foil hats, and then pretend to be leftovers.

What to snack on: Pancakes

Being recently deceased can be a bit of a hassle when the livings that move into your place don’t respect your sense of fashion. Watch this if you want to turn your kids into gothy little Calypso music fans who collect miniatures.

Where to watch: Tubi, HBO Max

What to wear: Your gothiest attire or something from L.L. Bean

What to snack on: Shrimp cocktail and gummy worms

If you missed this film in the ‘80s, it should definitely be on your summer watch list. When a Florida kid gets abducted by a UFO and experiences a time jump, his only friends in the world are Sarah Jessica Parker and a mysterious hunk of metal.

Where to watch: Disney Plus

When Billy gets a cute little Mogwai as a pet for Christmas, he immediately proves that he’s a terrible pet owner and basically destroys his entire town. In other words, this is a great film to make your kids watch if you have no intentions of getting them that puppy.

What to wear: A Christmas outfit

What to snack on: Lots of junk food, but never after midnight

If not talking about Bruno has been driving you crazy lately, it’s time to mix things up with the help of your favorite red-headed orphan.

Where to watch: Netflix

What to wear: Your finest dinner attire.

What to snack on: Popcorn. Let’s all go to the movies!

If your kids haven’t yet been introduced to the world of Indiana Jones, it’s time. Indy travels around the world in search of treasure. Sure, he does have a tendency to remove treasure that should probably be left where it is, but at least he manages to thwart the Nazis’ plan for world domination.

Where to watch: Paramount+

What to wear: Adventurer gear. Think khakis and fedoras.

What to snack on: Pita with hummus, baklava, and dates. 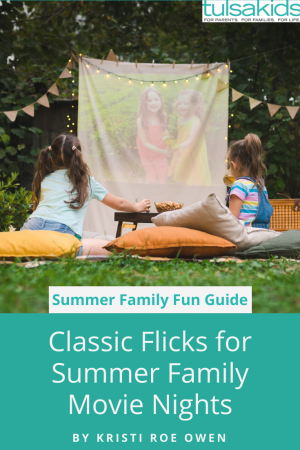 Homemade Christmas Ornaments to Give and Keep