Chincoteague: So much more than horses 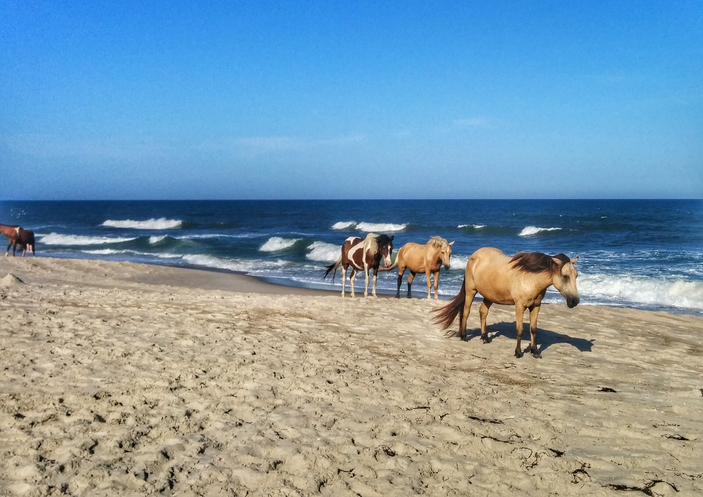 Ponies on a beach at Chincoteague Island. Photo credit: Mak_photo/Getty

You never know if your kids will love conies like their father or be able to pick up things with their feet like their mother. And so, I never knew if my children would devour novels like my spouse or be natural equine-lovers like me. As it turns out, our second daughter gravitated to both.

This was the impetus to deciding the destination for our recent family tradition of the “12-year-old” trip. As my youngest bibliophile approached one dozen years, we brainstormed where she wanted to go for a five-day birthday adventure.

A Destination with a Place in Literature

Chincoteague and Assateague islands are on the Eastern shore of Virginia and comprise part of the outer banks ecosystem along the southern tip of the Delmarva Peninsula (Delaware, Maryland and Virginia). While there are many great attributes to this residential and resort community, it is perhaps most famous for being the home of a wild band of ponies.

Legend has it that the famous herd sprang from the sole survivors of a shipwrecked Spanish galleon on the shores of the inlet about 1520 A.D or were perhaps stashed there by pirates. Modern theorists suggest that local farmers moved their livestock to these outer banks to avoid taxation. No matter the reality, this spirited stock has enjoyed some federal protections – along with their habitat – on Assateague’s shared Virginia and Maryland coastline.

Rowan and I came to know of Chincoteague from the books of the late author Marguerite Henry. An entire series of her books in the 1940’s and ‘50s sprang from the true-story roots of a wild mare named Misty, the children who loved her, and the lineage of ponies and people who continue to populate this charming destination.

Our day-long trip east began with a flight from Tulsa to Norfolk, Va. where we secured a hard-top Jeep to set the tone for our “girls headed to the beach” venture. Since Rowan was my only traveling partner, she had to serve for the first time as mom’s co-pilot and chief sign spotter, and we headed northeast across the 23-mile Chesapeake Bay Bridge & Tunnel tollway. The total drive time from Norfolk to Main Street Chincoteague was about 2 hours, and a pleasant sunset to dark drive through rural farmland.

Marguerite’s Home Away from Home

There are many beautiful bed and breakfast choices on the island (and a few small hotels for those who seek more modern amenities) and the one that caught our attention in our planning phase was Miss Molly’s Inn. We reserved the “Marguerite Henry” suite – the same space rented by the author when her editors sent her on the mission to this quaint island in the 1940s to “check out” the story of the band of ponies and their intertwined history with the local residents.

In this inn, Henry wrote the now internationally loved book Misty of Chincoteague (published in 1947), forged a life-long connection to the famed mare and her progeny, and set in motion a financial turn of fate for the community.

The innkeepers provided all the guests with scrumptious breakfasts, free access to bicycles and beach gear, board games, and more. The charm of the over a century-old house stems from its many porches and rocking chairs, fireplaces, library, seven unique bedrooms (five with private baths), fragrant garden, seashell driveway, English afternoon teas, and abundance of period furniture and appointments.
Another of the inn’s special graces was accommodating the younger guests’ breakfast tastes. I enjoyed items such as from-scratch egg and vegetable soufflé while our chef whipped out an order of pancakes, scrambled eggs and hot cocoa for the youngsters.

A Full Travel Menu (and Tummies)

If you are getting intrigued by Chincoteague Island, please be assured that your journey could please the young and/or the “young at heart.” This is a great vacation destination for any size family and with any age range of children, empty-nesters, or singles. And there is something happening year-round.

High points include the island’s famous “pony swim” in July, the Chowder cook-off in October, NASA Visitor’s Center just over the bridge on the mainland, the Roxie Theatre, guided bird-watching trips, kayaking, trolley tours, second Saturday art strolls from April to November, and a host of “rainy-day” doings too long to recite.

We found out during our visit to the Chincoteague Oyster & Maritime Museum that they will be offering new educational activities beginning in 2010 (think Elderhostel-style), with something great for traveling seniors or multi-generational families.

There are dozens of fine places to dine on the island, and in such a short time we simply could not get to many of them. We enjoyed the Sea Star café for lunch, and for dinners featuring pasta, oysters, clams, and many locally caught fish we tried The Village, A.J.’s on the Creek, and finally Bill’s Restaurant. For dessert, Rowan’s favorite haunt was the Island Creamery, with homemade fudge and ice cream that was a welcome treat during our warm August visit.

Much More Than Food & Shopping

We had pre-planned all the sights and educational opportunities we wanted to try to fit in our three full days on the island. Highlights of our agenda were: the Assateague Island Lighthouse and Bateman Learning Center, the Wildlife Refuge Tour (bus rides available, though we took our Jeep), and multiple visits to the Atlantic ocean (for boogie-boarding and shell collecting). One of the oddest, yet more intriguing, stops we made was to visit the “junk lady’s shop” to barter for a few treasures.

On Captain Barry’s Back Bay Cruise chartered trip through the tide waters between Chincoteague and the mainland, Rowan and I had the chance to walk in the black, nutrient-rich marsh at low tide to go clamming, learn the difference between oysters and clams (and eat them right out of the sea), catch blue tip crabs and hold sea cucumbers. Rowan loved it.

Because we were “all about the horses” on our vacation, we booked a riding lesson at both the Queen Hive Farm on the mainland about 20 minutes away (trail rides and beach rides also available) and at the Chincoteague Pony Centre. Home to many Misty-lineage ponies and a vast collection of Misty book and movie memorabilia, the Pony Centre hosts a very kid-friendly indoor “show” each week featuring young team and trick riders and ponies known as “veterans of the swim.”

We toured the Beebe Ranch and visited with family members of the real-life characters in Henry’s stories (Billy Beebe and his wife are the proprietors) at the house where one of the four-legged book characters was actually sheltered during a storm.

An additional “must do” is booking a sunset boat charter and we highly recommend Captain Charlie Birch of Chincoteague Cruises. This former U.S. Coast Guardsman and seventh-generation Chincoteaguer entertained us with his history of the island, eagle spotting, knack for knowing right where the dolphins would surface, and tales of shipwrecks. He offered steerage up to an amazingly close (but respectful) distance to the wild pony herd cooling themselves and their foals in reeds of the salt marsh between the sister islands.

You may be wondering by now – what DIDN’T we do while we were there? We fit in everything we truly wanted to do and see, but we never had “boots on the porch rail” time to soak in another important aspect of this place – the laid back “island time” quality. It has the feel (and reputation) of the kind of place you could turn your older youngsters loose in twos for a walk, bike ride or trolley lift without mom or dad.

Captain John Smith waxed poetic about the fair Eastern Shore in 1608, and it is easy to understand why. During the trip, Rowan and I waxed extensively (though less poetically) about our sunrise on the Atlantic or our favorite pony spottings in the mom and daughter journals. And eight months later as I read them and write this story (with much creative oversight by Rowan), I am transported back to Miss Molly’s parlor, driving through the pines, or watching the darting Plovers…back to our once-in-a-lifetime adventure that forged two even closer buddies.

And, of course, any of the following books in the Marguerite Henry collection (some available new today from Aladdin Paperbacks, New York, NY), including but not limited to –

Misty of Chincoteague
Filmed mostly on-site in Chincoteague and released in 1961, this is the colorful tale of a pony and the kids who loved her and starred only six professional actors, including David Ladd, Arthur O’Connell, Pam Smith and Anne Seymour. Based upon Henry’s book by the same name, directed by James Clark and rated G, this family classic’s cast featured many “locals” for main and cameo roles, though “Misty” is played by another horse and can be seen in group background shots. This DVD is available through Amazon and other online retailers.