Chicago Lights Up Big for the Holidays 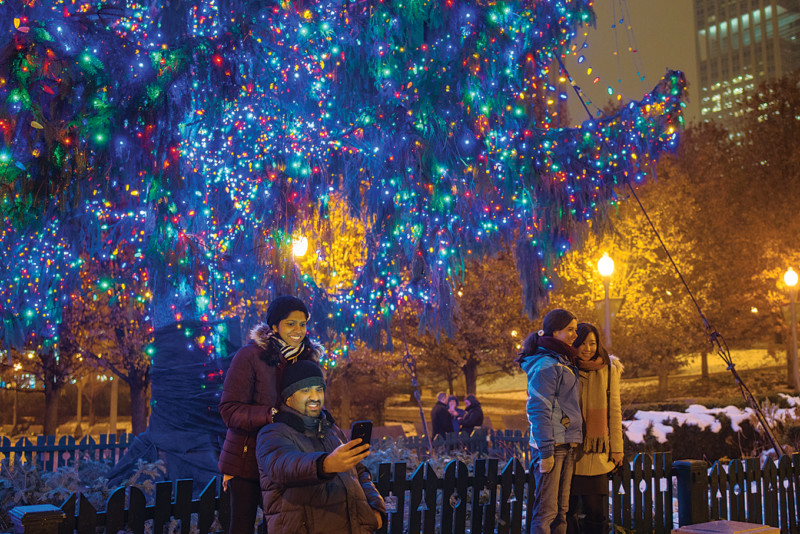 Christmas in Chicago is a magical experience. Photo courtesy of Choose Chicago

As the holiday song says, “It’s the Most Wonderful Time of the Year” and, for many, it’s the most hectic time of the year, too. Of course, adorning the tree with a garland and ornaments and decorating cookies is perfectly suitable for getting in the holiday mood. But, if you want to get your festive groove on, think beyond the normal traditions and head north to high-spirited Chicago.

Very few places come alive during Christmastime the way the beloved Windy City does. Of course, New York gets a lot of press with the Rockefeller Center tree lighting and its famously decked-out department storefronts. But, Chicago warrants well-deserved attention, too. With its signature lakefront skyline becoming a more magical backdrop than the rest of the year, December’s Chicago is aglow with sparkling light displays interwoven with both new and traditional holiday attractions. And, because wintertime can be blustery cold, Chicago offers a ginormous wintry mix of both indoor and outdoor activities to enjoy while sometimes literally “dashing through the snow.”

Chicago takes pride in hosting over a dozen lighting ceremonies to kick off the season in November, and these illuminated hotspots stay brightly lit into January. Some of the best of the best include the enchanting two-and-a-half million bulb-lit Zoo Lights exhibit at Lincoln Park, the Magnificent Mile Lights display with its more than one million lights aglow all over the Michigan Avenue District, and the Chicago Botanic Gardens, with its cathedral of lights, and this year’s new exhibit, Lightscape, an after-dark, illuminated trail meandering through the garden. If that’s not enough, there’s Winter Wonderfest at super kid-friendly Navy Pier, and the German-themed, open-air Christkindlmarket.

Your Own Ice Capades Show

For family fun on the ice, Chicago has several skating rinks open to the public. The most popular of them is Millennium Park’s McCormick Tribune Ice Rink. Adjacent to it is Maggie Daley Park’s rink, called Skating Ribbon, which winds through the property. For skaters who’d like a unique twist, there’s the “rink with a view” from four stories high at Michigan Avenue’s Peninsula Hotel. Rentals are available at each location. 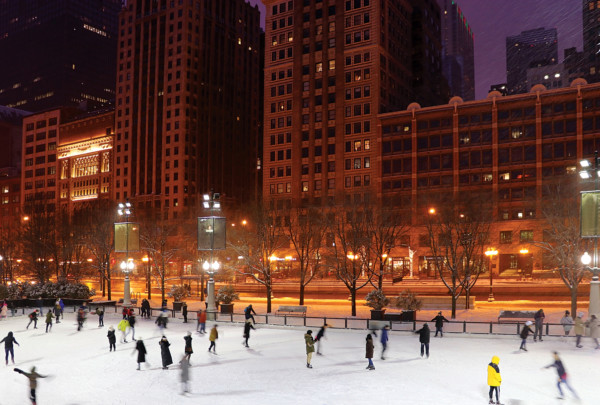 Worldly Traditions at Chicago’s Museum of Science and Industry

The “Christmas Around the World and Holidays of Light” celebration has been underway at Chicago’s Museum of Science and Industry for over 75 years. The museum displays a jaw-dropping, 4-story Grand Tree, which is encircled by over 50 smaller trees. Each of them is specifically decorated to match various cultures and unique holiday traditions the world over.

A Golden Ticket to the North Pole

Who doesn’t love trains? At Chicago’s Union Square Station, you can purchase golden tickets to hop onboard this magical hour-long Amtrak-powered journey. While listening to the soundtrack from the Polar Express movie, you will be entertained by Santa and his elves and served hot cocoa and sweet treats while taking an imaginary trip to the North Pole. It is recommended that you reserve tickets in advance and get to the station at least an hour before the train’s departure.

Window shopping is more fun than ever when strolling along State Street at Macy’s on State Street. For over 50 years, Macy’s has served up beautifully decorated window displays, drawing thousands upon thousands of visitors each year. This tradition provides the chance to immerse yourself in imaginative scenes, bringing the holiday world to life. This year’s theme is “Believe in the Wonder.” Be sure to warm up inside and take a gander at the domed, vaulted Tiffany Ceiling, a 1.6 million piece, 6,000 square foot colorful glass mosaic, the largest of its kind worldwide. Also, admire the 450-foot Great Tree and dine around it in the nearly 115-year-old Walnut Room.

If you care to see the city from 94 stories up while sharing your wish list with jolly Old St. Nick (who visits on weekends and on Christmas Eve), be sure to experience 360 Chicago at the top of the iconic John Hancock Tower. It’s the second tallest building in the city and located right along the Magnificent Mile. For an added thrill, experience the Tilt, which is an extended ledge on the observation deck that tilts at an angle, giving you a downward facing perspective of the bustling, decorated city streets below.

This is just a short list of ideas that may help your family feel the wonderful warmth and excitement a holiday trip to Chicago offers. There are always first-rate live theater productions to consider such as the Joffrey Ballet’s own reimagined rendition of “The Nutcracker” and lots of authentic deep-dish Chicago-style pizza to be had at Giordano’s when your toes are cold and your tummies are empty.

Chicago is a wondrous place to visit any time of year, and it continually ranks as a top destination by Conde Nast Traveler readers, remaining #1 for three consecutive years. For more details about specific holiday happenings, visit www.choosechicago.com. 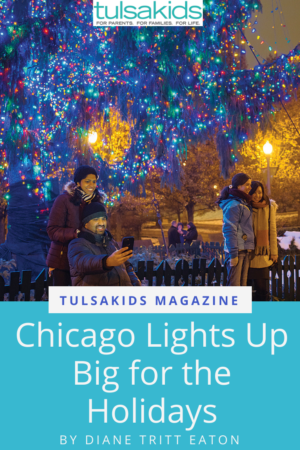