If you’ve been following my blog, you know I love to bake. And, although I haven’t done it very much in the past few years due to time/countertop space constraints, one of my “signature bakes” has always been pies. I used to bring pie–pecan, apple, chocolate you name it–to family gatherings, using an old family recipe for a vinegar crust (my secret ingredient being apple cider vinegar–so delicious!). My first “date” involved teaching a boy how to make pie (a Hammet House recipe for chocolate cream that we’d taken home on one of their paper placemats). So yes, even though I still have troubles with falling crust sometimes, I love making (and eating!) pie.

So it will come as no surprise when I tell you that I’ve been looking forward to seeing “Waitress” the musical at the PAC ever since Celebrity Attractions announced their current season!

I’ve been lucky enough to attend several Broadway shows at the PAC this season, and there’s been such a nice variety: from the melodramatic “Love Never Dies” to the outrageous (and outrageously hilarious) “Book of Mormon,” to “Waitress,” which takes place in a down-to-earth, small-town/diner setting and deals with problems that have likely touched everyone in the audience in one way or another: Protagonist Jenna is married to an immature, abusive narcissist (and learns at the beginning of the musical that she is pregnant); her quirky coworker Dawn is perpetually single and afraid of getting involved in a relationship that inevitably means a certain loss of control over her own life; her other coworker Becky is dealing with the joys of middle age (Read: lopsidedly sagging breasts) and a husband who needs constant medical care. If nothing else, none of them are where they envisioned themselves to be at this stage in their life: working at a diner, either single or in a disappointing relationship. Jenna particularly reflects that her mother–who has passed away–would probably be disappointed, not in her, but in what her life has become.

Despite their various trials, Jenna, Dawn and Becky’s lasting joy comes from their work and friendship–and ultimately, although at first she is not excited about the baby because of her awful husband, in motherhood.

Joss has a book called “Truck Stop” that chronicles a morning in the life of a boy whose family runs a roadside diner. The family wakes up, starts the coffee, turns on the neon lights, and then greets the truck drivers as they start arriving in for breakfast, knowing exactly what each will order. There’s something special about that early-morning rushing feeling, and the community they’ve built just by being there serving up eggs, juice, etc. It’s the same feeling you get from watching Jenna and her coworkers interact with their regulars, even crotchety old Joe, or from watching her find happiness and emotional relief in something as simple as baking a pie. I’ve already used the phrase down-to-earth, but there it is. 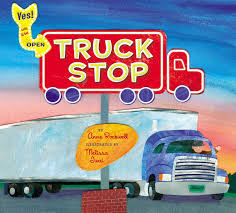 Even more down-to-earth, I loved that this musical wades right into the subject of pregnancy, including the anticipation of peeing on a pregnancy test, visits to the OB/GYN–and dealing with the unexpected stress of realizing your favorite doctor has retired!–concerns about spotting, fears that you won’t be the mother your child needs, and labor. If anything bugged me about the musical, it was that Dr. Pomatter really didn’t inspire confidence as an OB/GYN and *SPOILER WARNING* it is unbelievably unprofessional/unethical to have an affair with a patient, right?! It’s confusing because he’s fairly likeable (ethics aside), and he becomes Jenna’s main love interest, but it is ultimately a relief that they don’t end up together. Still, I appreciated that several of the scenes take place in a gynecologist’s office and that pregnancy/labor/delivery are explored throughout the musical because it is empowering to see those important and difficult moments in one’s life acknowledged and celebrated.

I was a little worried that “Waitress” would be too stressful to be enjoyable (not that I didn’t expect to enjoy it!), but I knew that she had an abusive husband that she needed to get away from–and knowing that there’s going to be a potentially violent confrontation at some point means you’re sitting on edge at least a little the whole time. But even Jenna’s horrible husband, Earl, provides some moments of comic relief just because he’s soooo arrogant (His response to her pregnancy announcement is, “Promise me you won’t love the baby more than me”–which isn’t funny, except that you’re taken aback by how someone can be so clueless and awful), which helps mitigate some of the stress. Plus, there are enough other hilarious moments–Ogie, Dawn’s eventual magician/Revolutionary War re-enactor/impromptu poet boyfriend had everyone laughing out loud and cheering after his introductory song–that you’re reassured that everything will work out eventually–and it does.

If you want to do a little research before heading to the show, you can find the soundtrack on YouTube. My favorite song on stage was probably Dawn’s explanation of why she was afraid of trying to find a relationship, but because it’s a little more relevant, here’s another favorite, “Dear Baby,” which is full of spoilers at the beginning but is a beautiful song about feeling lost and trying to find yourself again, and coming to the realization that we are all made up of contradictions: “It’s not easy to know/I’m not anything like I used to be…I still remember that girl./She isn’t perfect, but she tries./She is good, but she lies./She is hard on herself./She is broken and won’t ask for help./She is messy, but she’s kind./She is lonely most of the time./She is all of this mixed up and baked in a beautiful pie./She is gone but she used to be mine.”

Finally, I remember from watching the movie years ago that I always wanted to try making Jenna’s “Mermaid Marshmallow Pie,” and you can find recipes for it online now! Here’s one from PopSugar. Let me know if you try it 🙂

“Waitress” is playing at the Tulsa PAC through April 21. Here’s the schedule of performances: 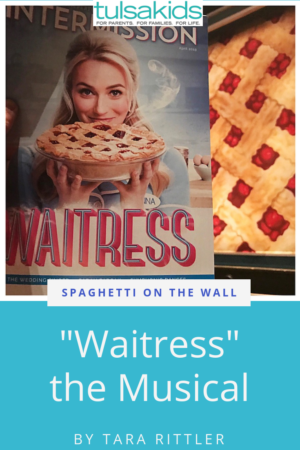