I’ll admit right now that I’m a huge fan of Dav Pilkey’s Captain Underpants books. So when I heard that Pilkey was coming to Tulsa, I jumped at the chance to do a phone interview 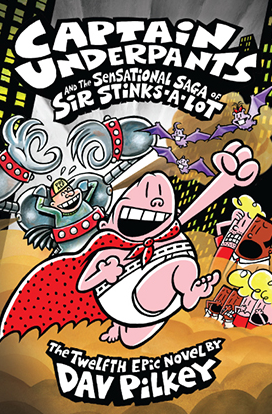 with him. BookSmart Tulsa invited Pilkey in honor of Banned Books Week, Sept. 25 through Oct. 1, because (horror of horrors) Captain Underpants turns up on the American Library Associations (ALA) list of banned or “challenged” books along with A Wrinkle in Time, A Light in the Attic, Roll of Thunder, Hear My Cry, In the Night Kitchen, Junie B. Jones, Bridge to Terabithia and The Holy Bible. Here are some of the banned classics: The Great Gatsby, The Catcher in the Rye, The Grapes of Wrath, To Kill a Mockingbird, A Separate Peace, Invisible Man, Their Eyes Were Watching God, Invisible Man and The Lord of the Flies, among others. My favorite books! I remember reading Bridge to Terabithia out loud with my daughters when they were in middle school, even though it was hard to read through the tears.

Pilkey’s presentation is on Thurs., Sept. 29, 2016 at 5:30 p.m. at Oklahoma University – Tulsa, Schusterman Center, 4502 E. 41st Street. He says it will be a fun presentation for all ages – kids and adults – with multi-media elements. There will be giveaways and a book-signing afterwards, which Pilkey says he looks forward to “because it’s nice to get to know the kids a little.”

If you aren’t familiar with banned and challenged books, you can go to the ALA website for more information. The list comes from the ALA’s Office for Intellectual Freedom, which “records attempts by individuals and groups to have books removed from libraries’ shelves and from classrooms.”  Banned Book Week is really about celebrating the freedom to read.

I asked Dav Pilkey how he felt about Captain Underpants holding the #1 spot on America’s “Most Banned Books” list for two years – 2012 and 2013 — (which, by the way, tops Fifty Shades of Grey, a book that I have NOT read) and continues to be on banned and challenged lists.

“I guess I have mixed feelings [about being on the list],” Pilkey said. “In some ways, it’s a great honor to be included with some of my favorite authors like Mark Twain, but I’m a little curious as to why I’m on that list. There’s no sex, no profanity…I think perhaps it’s the subject matter. There are children who have a lot of power, and perhaps some adults are bothered by that. The books hold up a mirror to adult behavior.”

Certainly, if you’ve read any of the Captain Underpants books with your kids, you might be hiding your laughter behind a hand. And teachers, maybe seeing a little of themselves in the tyrannical teacher characters, might be tempted to put their hands on their hips and wave a finger at the Pilkey’s humor. While I find the books laugh-out-loud funny, there are parents who feel that they might be encouraging their kids to misbehave if they show any amusement at the antics of fourth-grade cut-ups George Beard and Harold Hutchins.

When I asked Pilkey about that criticism of his books, he responded, “You could say that about any fantasy series. That’s part of the fun of fiction. Books give kids a way to act out in their imaginations, a way to let off steam.”

Pilkey created Captain Underpants in third grade to help him get through his own miserable elementary school experience. A child with ADHD and dyslexia, Pilkey was constantly in trouble. “It was really rough,” he said. “I couldn’t sit still. I wanted to do well in school, and it bothered me that my parents were upset. I just couldn’t stay in the good graces of my teachers. My teachers were really mean to me.”

Dejected, Pilkey would tell his mom that his teachers hated him and ask her why he had so many problems at school. She would respond in her characteristically optimistic way that maybe something good would come out of it.

“School was not really a safe place for me,” Pilkey said. “But my parents were always on my side. My teachers didn’t like what I was choosing to read. They would take away Mad Magazine. My parents would let me read whatever I wanted, and that changed everything for me. I went from a kid who hated to read to a kid who loved to read. All the encouragement at home made all the difference.”

And Captain Underpants has helped him work through “those painful experiences from my childhood.”

Fans of Captain Underpants will recognize the evil principal Mr. Krupp and the mean teachers with the great names (who can resist a good pun?) like Ms. Tara Ribble, Mr. Rected and Miss Fitt as representations of adults who were not nice to them. Even kids who don’t have trouble at school can relate to an occasional bad day or a teacher that they don’t like. Pilkey wants kids to know that they’re not alone.

“I’m so excited about touring and talking to kids who have the same struggles as I did,” Pilkey said. “Some kids don’t thrive in school, and I hope I’m a hopeful person for those kids to look up to. I never had that as a kid. I always thought that I wouldn’t do well in life if I didn’t do well in school.”

Pilkey’s accomplishments probably surprised his teachers. The Captain Underpants books have sold more than 70 million copies and have been translated into 25 languages. Next summer, DreamWorks will release the Captain Underpants animated movie (June 2017), and Pilkey is currently working on the third book in his Dog Man series.

Take a look at the American Library Association’s list of banned books. Which banned book character would you want to have dinner with? Even though it might be a little depressing, I’d love to talk to Holden Caulfield of The Catcher in the Rye. The poor guy seems to need someone to talk to. Who would your dinner partner be?