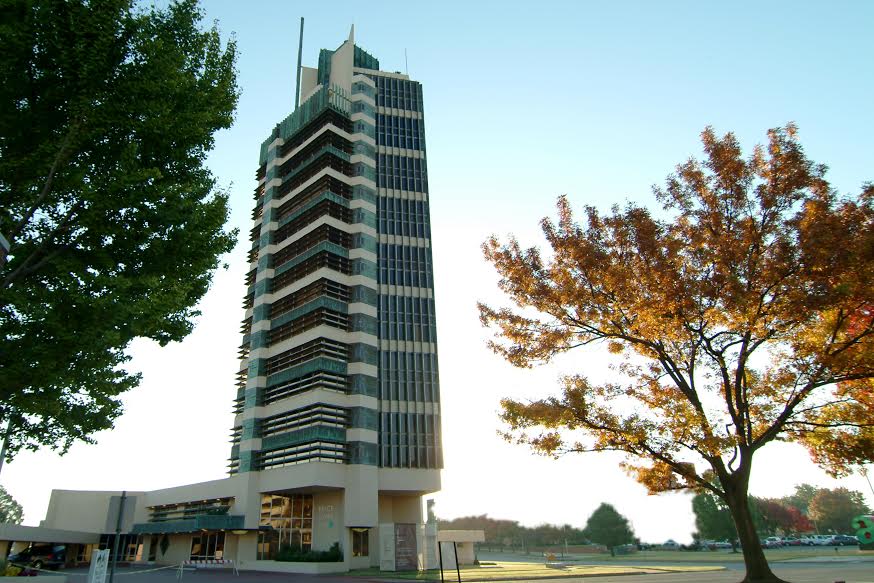 Did you realize that the ONE and ONLY Frank Lloyd Wright-designed and fully completed skyscraper is straight up Highway 75 in nearby Bartlesville, Oklahoma? I was pleasantly surprised to learn that one of (if not THE) the most influential American architects of all time brought his talent in the form of a true architectural masterpiece to this small prairie city.  Today, it stands tall for us all to admire and enjoy.  The Price Tower Arts Center is one of only three of Wright’s works in Oklahoma and the only one in the state that is open for public viewing.

How The Price Tower Came to Be

“The Tree That Escaped the Crowded Forest,” Wright’s name for the structure, came to be after a few decades of stop-and-start evolution. He originally completed his skyscraper design project in the 1920s for New York City, but the Great Depression scrapped the funding for it and the design plans were filed away.

However, thanks to wealthy Bartlesville oilman H.C. Price, 85-year-old Wright was commissioned in the early 1950s to design an office building for him with the help of a select few, including architect Bruce Alonzo Goff, who chaired the School of Architecture at the University of Oklahoma and who introduced Price to Wright. (Goff is distinguished by his designs for houses and other buildings, such as Boston Avenue Methodist Church, in Oklahoma and elsewhere, and his work was heavily influenced by  Wright).

Wright’s original skyscraper plans were resurrected, modified and executed and, thus, a “tree” in Bartlesville was erected.  The skyscraper that was once planned to reside among many in a “virtual forest” of them in Manhattan became a contrastingly tall building on the Oklahoma Plains.

Frank Lloyd Wright’s plan mixed “taproot” design with cantilevered floors. Known for his organic-inspired design, Wright borrowed from the natural design of a tree, crafting the building’s outer walls and floors to extend from a central foundation—the taproot, or trunk, an inner core constructed of concrete and steel.  All of the tower’s floors stem out like tree branches, cantilevering from the core.

From Office to Museum

Officially opening in 1956 on Dewey Avenue between 5th and 6th Street, the 19-story, gold-tinted and copper-laced building served as office space for Mr. Price and other businesses as well as a dwelling space for a select few.  Today, the “tree,” now named The Price Tower Arts Center, is a fully functioning office space, a friendly museum, and an operating inn, which is listed on the Historic Hotels of America registry. 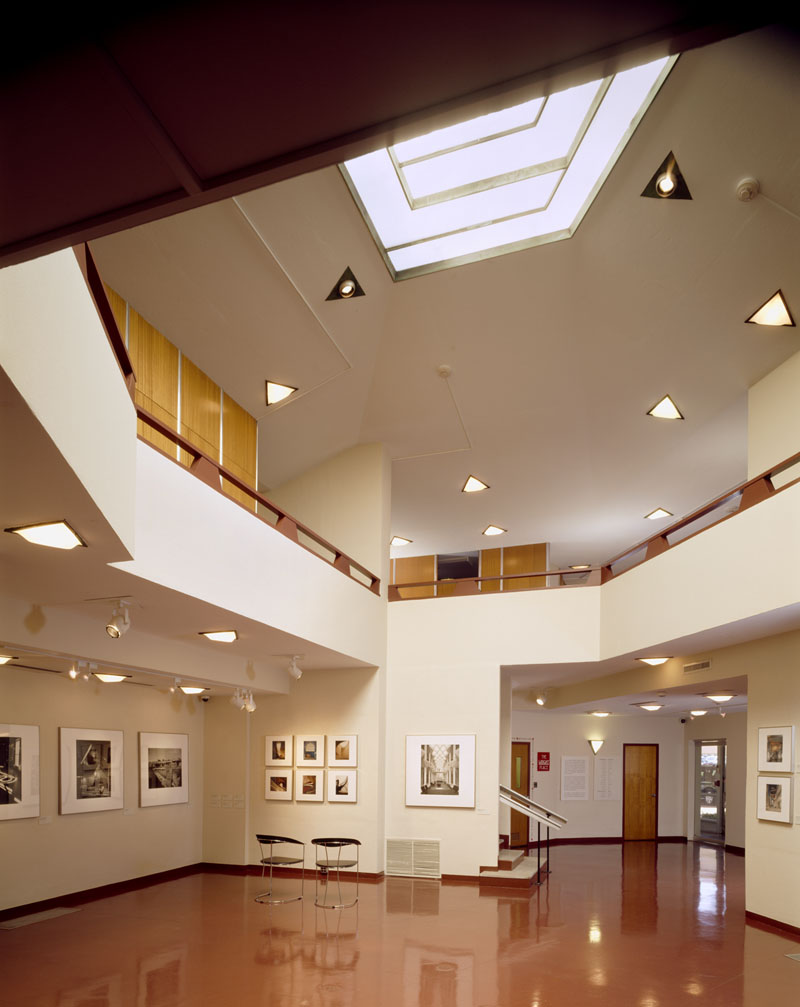 Most days, the center offers an hour-long, guided tour, which includes a visit to the restored executive office of Mr. H.C. Price and the H.C. Price Company corporate apartment, located on the top floor.  Within these windowed walls, you can view original Wright interiors as well as admire the Osage Hills and downtown Bartlesville. The tour also includes explanations of the building design, the choice materials used, and the architectural nuances that are unique to Wright’s architectural style, one of which is his belief that space should not be wasted on elevators, lobbies or stairwells.

Heading up on the tiny elevator is fun for the riders, but it may require a few trips to get everyone in the family on the same floor at the same time. The final phase of the tour offers a leisurely glance at both temporary and permanent displays on the first floor and second floor mezzanines. Photographing the copper mural in the lobby is almost a requirement, in my opinion.

If you are interested, the 15th and 16th floors house the Copper, a bar and restaurant with pub food, wine, beer and spirits. This is a fine place to sit down to watch the sun set over Osage County and to talk about the building’s beauty. (Editor’s Note, as of Sept. 2022, Copper is temporarily closed for renovations.)

Wright designed all of the built-in furniture at the Tower, and the hotel rooms are furnished to maintain the integrity of Wright’s mid-century design, including the use of colors, materials and finishes. Visitors will notice the use of copper and the unusual triangular shape of the tiny bathrooms, retaining the original layouts.

Rooms are modernized with flat screen televisions and have seriously comfortable beds, but some rooms/suites are not well insulated, so they can be very hot in the summer and downright cold in the winter months. Space heaters are provided, but if it’s really cold out, that might not be enough. However, spending the night might be an added twist for a real family adventure, especially for curious kids and flexible folks who want to soak in Frank Lloyd Wright’s style and flair.

Dubbed a National Historic Landmark in 2007 as well as earning a spot on the list of one of the American Institute of Architects’ 17 most significant examples of Frank Lloyd Wright’s architecture, the tower uniquely punctuates downtown Bartlesville, leaving a lasting impression of Wright’s great work and one worth taking family time to tour and to stay in the hotel, for those who might want to spend a night at the museum.

As noted on the website, pricetower.org, tour times for individuals are offered Monday-Saturday at 11 a.m. and 2 p.m.  There is one tour on Sunday at 2 p.m.

The staff here is highly knowledgeable and extremely accommodating—an added touch for an already nice experience. For more information, call 918.336.4949.