As my two 13-year-olds get ready to go back to school a̶f̶t̶e̶r̶ ̶t̶h̶e̶ ̶p̶a̶n̶d̶e̶m̶i̶c̶ amid the apparently still-raging pandemic, it occurred to me that this is actually going to be their first back-to-school as middle school students thanks to the whole virtual learning experience of the past year-and-a-half.

To get them ready for the social side of school, we shipped them off to TPS’ summer programming for a few weeks, where they got to hang out with other teenagers playing Dungeons and Dragons, learning about the Tulsa Race Massacre with a visit to Greenwood, and hanging out with friendly animals from Safari Joe’s.

But now that summer school is wrapped up, we have to get ready for the tough stuff like algebra and middle school language arts. Thinking back on my own middle school days, I’ll admit I really didn’t love them. I was an eighth-grader in 1989, and between the loud hallways, perilous polynomials, and hyper-hormonal teens getting into fistfights and other teen drama, I solidly dreaded going to school.

But despite the frustrations, there were a few things that made middle school more bearable in 1989, and since Arthur and Noah are the type of kids who love watching The Golden Girls, playing retro games, casually Rickrolling, and listening to Def Leppard, I’ve put together this guide to everything they need to experience middle school the way their mom and dad did in the late ’80s.

Middle school lunchrooms in the ’80s were Darwinian wastelands replete with currents of wafting B.O., Navy for Women (which I recently re-purchased for myself as a lockdown comfort and highly recommend), and Aqua Net hairspray, but the menu was a latchkey kid’s dream come true.

I’ll never forget the feeling of realizing that for the first time in my life, I could purchase anything I wanted with the $1.25 my parents gave me for lunch every day, and no adult would stop me because they didn’t care. And if I was clever enough, my no-allowance-having-self could pocket part of it for later spending at Skate World.

Sure, I could spend that money on a healthy, well-rounded lunch by going through the regular lunch line. But instead, I could get a bag of Cool Ranch Doritos for 50 cents and an 8-oz. grape Vita Pup slushie for a cool 35 cents. 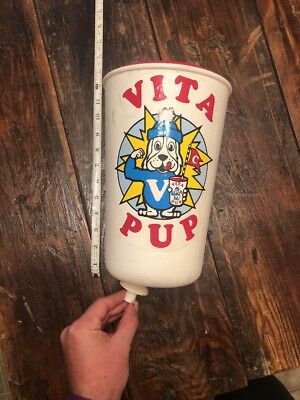 But what was a Vita Pup, anyway? Was it some kind of healthy energy drink? Heck no! It was the ’80s, after all, when kids were practically spoon-fed sugar in everything from our Cap’n Crunch cereal in the morning to the constant river of Kool-Aid at every youth group event.

And true to the times, a Vita Pup was essentially a rebranded version of Slush Puppie, which is pretty much an ICEE and was even later acquired by the ICEE company. Sugar and Doritos for lunch, anyone?

There’s one thing I constantly dream would make a comeback from the ’80s, and that thing is called Mead Super Shades. See, every kid in the ’80s had to have a super dope freaking Trapper Keeper notebook with the velcro closure and screensaver-foreshadowing art (I owned this one at some point).

But around 1988, Mead upped their game with the gorgeous pastel proto-vaporwave Super Shades line. Inside the backpack of every gen-X kid who was lucky enough to have it was a stash of candy-colored notebook paper in shades like Peach, Fresh Mint, Lavender, Neon Yellow, Teal Mist, Turquoise, and Sizzling Pink. While teachers would endlessly complain about not accepting work on colored paper, these delightful leaves were the perfect medium for notes passed among friends, folded neatly in the requisite fashion of the ’80s (a skill you can acquire here). 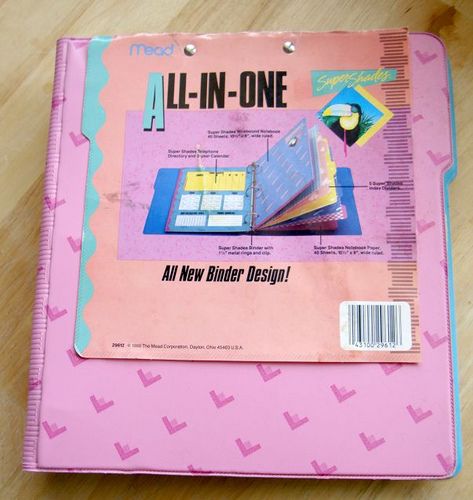 A couple of years before we would all collectively embrace Doc Martens and platform wedges, many a school-age kid from pre-K through graduation owned or longed for a pair of 1960s-throwback Keds Champions, thanks in part to a boost from the film Dirty Dancing. Preppy, comfy, and versatile, Keds could be worn with everything from skirts to shorts to jeans. Girls generally wore the sneakers, and boys would more often rock the slip-ons, although this wasn’t strictly true.

If you didn’t own Keds, you very likely owned a pretty fair knock-off version, and you’d better believe that conspicuous lack of a blue tag on the backs and inevitable glue failure was like a billboard of your family’s socioeconomic status. Toward the end of their brief revival, fake Keds were practically ubiquitous and could be purchased in every color of the rainbow at any discount store.

If you were more into metal and punk than mainstream fashion in the late ’80s and were fond of reimagining your denim jackets with band patches like my husband and every boy I ever crushed on was, you probably went back to school wearing a pair of skate shoes like Vision Street Wear’s suede hi, meant to be a gnarly twist on Chucks or an edgier alternative to Vans. These are a rare example of a shoe that seems to look better the more seasoned they are. 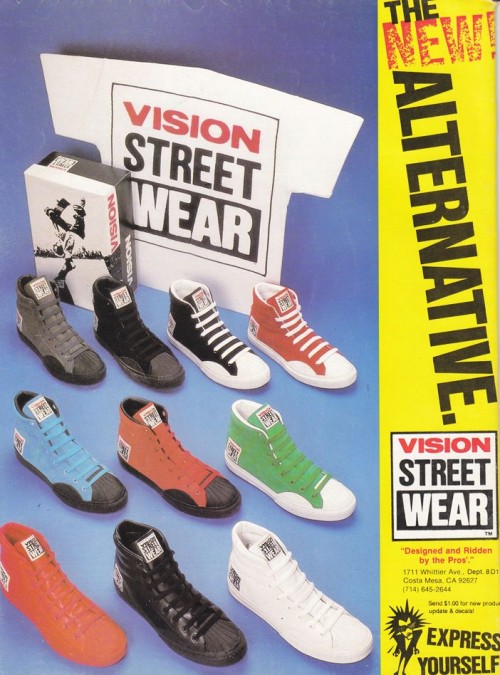 While girls like me were committing daily hair crimes with violently teased and backcombed mall bangs, the cutest boys were actually rocking a pretty awesome look thanks to the likes of Tony Hawk and cute little Leo DiCaprio. Edgy and chaotic, the skater boy style could be flipped from side to side with a swoon-worthy casual defiance. 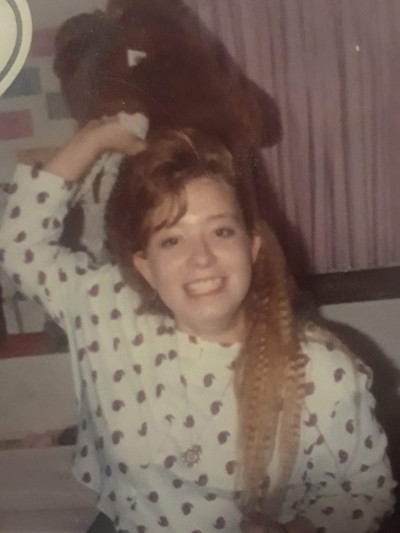 As a middle schooler in 1989, you would be required to love and care for a massive textbook for every class starting with ceremoniously checking it out, signing your name in the front, and adding a book cover.

Long before textbook companies lobbied schools to replace their materials constantly and the digital shift emboldened their sketchy ways, textbooks would need to be preserved for years if not decades. After excitedly checking to see if you knew any of the book’s former custodians, you’d be responsible for lugging that bad boy around until you signed it back in on the last day of class.

Although Keds-wearing kids would often buy the fancy covers, most of us would have to DIY them using a brown paper sack to make our very own bespoke textbook covers (you can learn how to make your own here).

A Walkman, I would remind my teens, is a type of portable music player with headphones that was meant to play cassette tapes. And if you didn’t have the latest Beastie Boys album, you could pick up a blank cassette for around a buck and record your own radio mix.

While my husband and I both spent our fair share of time trying to avoid detention, it was for completely different things. In my case, it was generally for passing notes in class or reading a book behind my textbook.

In Justin’s case, it was for things like slipping his Walkman cord up his sleeve and leaning on his hand so he could pretend he was attentively focused on civics and not listening to Metallica on his deconstructed Walkman headset. But taking your Walkman to school was a risky venture—get caught and your cassette player would end up locked in the teacher’s desk until the last day of school!

In the late 1980s, there was only one way to wear your socks, and that way was heavily slouched. Pulled-up socks were how you identified nerds and senior citizens. Instead, you lovingly slouched your calf-high socks as if all of the elasticity was out of them.

And if you wanted to be super cool, you could try layering them. My friend’s sister used to look resplendent with a pair of taupe socks layered under white ones slouched marvelously above her bright white Keds Champions. 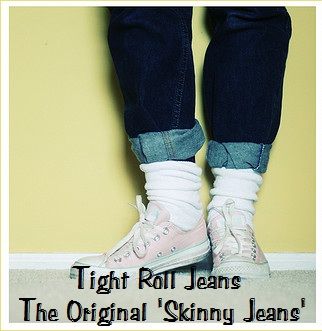 While Justin abhorred this look and avoided it entirely, I loved and embraced it as a short person whose pants are perpetually dragging the ground.

I first encountered these books hidden sneakily behind the textbook of a friend who would eventually introduce me to many horror novels my mother probably wouldn’t approve of. These PG-rated paperbacks were the Pringles of YA books when they were first released in 1989.

It was a rare moment of generational synergy when Arthur and I were equally excited to see the recent Netflix Fear Street trilogy. Although I couldn’t remember much about the series from back in the day beyond the pure delight of carrying around a contraband paperback with a wasted spine from being passed around among friends, I was ecstatic to check out the Netflix series with my own horror-loving teen bookworm.

Arthur, who read Goosebumps prolifically in grade school but had never checked out the more grown-up teen-targeted predecessor, was just as eager. If you’re thinking about checking it out, a word of warning that the films are aimed at an older teen audience and certainly have a healthy share of adult content (a sex, drug use, and gore trifecta) if you’re sensitive about viewing. If you grew up watching Child’s Play and A Nightmare on Elm Street with your parents as I did and you’re not concerned, then by all means, carry on.

If you were a reader, you could treat yourself to the most gorgeous bookmarks filled with images of things like cute kittens, playful dolphins in fantasyscapes, and various friendship quotes against watercolor backgrounds. Recognizable for their rounded corners and yarn tassels, these sweet little bookmarks were the perfect gift when you needed something that cost $5 or less. 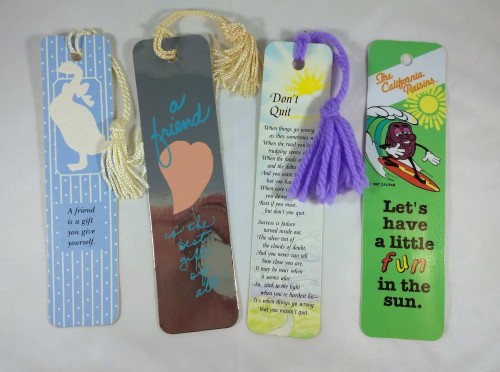 After reading this list to my teens, I asked them if they felt ready to go back to school like it’s 1989, and they were all in. “Only one thing I’d change,” Arthur told me. “What if I go back to school but try on a different decade each week?”

What are your teens doing to get ready for back to school? Hit me up in the comments section, don’t forget to try rolling your jeans tight, and have a gnarly week in your little nebula! 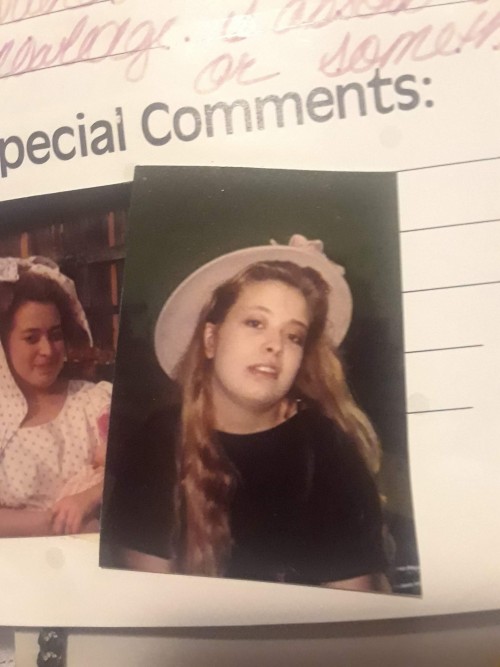 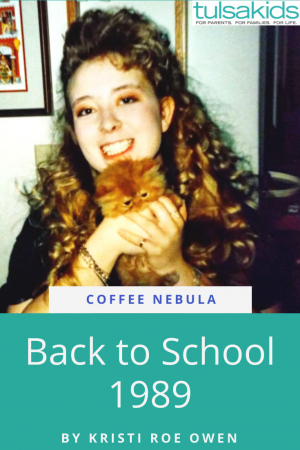