April is the Cruelest Month

While most of us welcome the advent of spring, certain high school seniors who have received college rejections may agree with poet T.S. Eliot, whose opening lines in The Wasteland assert, “April is the cruelest month, breeding lilacs out of the dead land, mixing memory and desire, stirring dull roots with spring rain.”

Who wants to look at blooming flowers and sunshine when 10 rejections have popped through your college admissions portals?

And, to rub salt in the wound, the recent arrests of the wealthy and famous who were caught cheating to get their kids in to name-brand colleges only underscore what we’ve suspected all along – life really isn’t fair.

As a parent who has been through this stressful process, I can tell you that you will see that it ultimately doesn’t matter all that much. My kids were all rejected and accepted like bouncing balls. Now, among the three of them, they have six degrees and have been to seven different colleges and universities (that’s not counting programs at the University of Barcelona and the University of Madrid). None of them went to Ivy League schools, and I think they turned out to be fine adults. At least they seem to be so far, right kids? (Not that they read my blog).

While rejections definitely hurt (sometimes they hurt the parent more than the kid), here are a few things to keep in mind.

1. First, you might think of a couple of people you know either personally, or in public life who have degrees from Ivy League schools. Do you admire these people? We all know that there are some despicable human beings who went to the schools who rejected you. This may help you put things into perspective. It’s not the college that makes the person. As I told my kids, you can get a good education anywhere. It’s up to you to take advantage of it.

2. If your identity is tied up in the name of a college or university, a job or career, then you may want to do a little self-reflection about your identity. Or perhaps get some therapy.

3. If you have never experienced rejection or hardship before, congratulations! Either you are an incredible person who is talented and lucky beyond belief, or your parents have done a phenomenal job of shielding you from adversity up to this point. If the latter is true, then you may be in for a shock once you are on your own.

4. If you are experiencing rejection, view it as an opportunity to show grace in handling hardship. Learning to work through disappointments will serve you well in life. I don’t know a single human being who hasn’t experienced loss. As you work through your disappointment, you can begin to explore the many other options available to you. And, if you end up at a less expensive school, think about the ways you can use the money – study abroad, extra-curricular activities, graduate school. It may be the universe’s way of telling you to slow down and look around you.

5. Finally, college is only the beginning, not the end. We often get caught up in the high school drama of which kid got accepted to what school. Parents might see an acceptance as their victory. If you are experiencing hurt and rejection, remember that you are in a rarified atmosphere. Ultimately, no one will remember or care where you ended up. Next year, if you bloom wherever you’re planted, April will not be the cruelest month, but may be the coolest month ever. 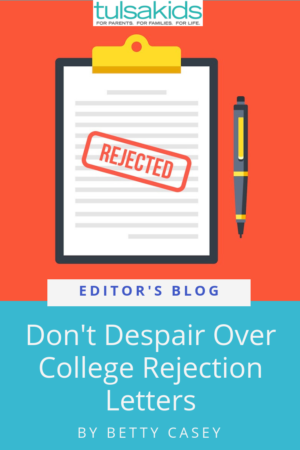