A Poem for You – Happy National Poetry Month

My daughter and her boyfriend texted me a picture of a poster last night. Their college is doing a 12-hour reading of Milton’s Paradise Lost, which reminded me that today is the beginning of National Poetry month.

I know, most of you think of it as April Fool’s Day. Well, poems can be foolish. Poems can be everything – poems reflect our deepest emotions, happiest times, darkest hours and brightest illuminations of the soul. Often, they’re a snapshot in words of a moment that makes us say, “Yes, yes, that’s exactly it!”

In honor of Poetry Month, I want to share with you one of my favorite poems. I love it for what it is, but I also love it because my daughter Mary LOVED A. A. Milne’s Winnie-the-Pooh stories when she was a preschooler. She preferred the old-fashioned, hardcover books with lots of text and the quaint pen and ink drawings over the re-packaged, brightly colored Disney-esque versions. I feel cozy even now thinking of lying in bed with her, reading about Winnie-the-Pooh, Eeyore, Piglet and Owl – and, of course, Christopher Robin.

When my daughter Anna was in first grade (age 6) and her school was participating in a poetry recitation event, I taught her this poem. It still makes me cry to read it. I love it, and I hope you do, too. 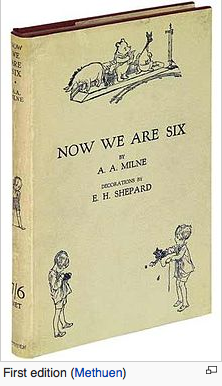 When I was five I was just alive
But now I am six, I’m as clever as clever;

So I think I’ll be six now for ever and ever.

Now We Are Six is a book of thirty-five children’s verses by A. A. Milne, with illustrations by E. H. Shepard. It was first published in 1927.