It is hard to fathom that a dozen years ago the September 11th attacks took place on US soil, changing the way Americans felt about safety and freedom, as we once understood it for ourselves and future generations. With nearly 3,000 innocent lives lost on that horrifically tragic day, we had to re-up and re-boot. And, here we are, 12 years later, forging ahead and getting on with our lives.

But each year we honor the anniversary of the attacks and, in our hearts, pay respect to the victims and their families. We, as individuals and as a nation, will never forget.

As a native New Yorker and a former employee of a company housed in the World Trade Center complex, I have been eager to take the family to Manhattan now that the National 9/11 Memorial is open to the public. In fact, it was unveiled two years ago on the 10th anniversary of the attacks. We had the opportunity to go just a few short weeks ago so it is still very fresh in my mind.

I had read about the Memorial, seen many pictures and even a few videos on television, so I thought I had enough under my belt to be prepared for the intense experience. But upon arrival, I quickly realized that no professionally shot photograph or carefully crafted words on paper could convey the sheer magnitude of being there up close and personal—-in real time.

For starters, at the initial entry point, there was nothing but boarded up walls, metal, exposed beams and construction signs alongside pylons. Making my way through the temporary pathways leading up to the actual grounds, it was already easy to recall the massive destruction that took place here in a matter of hours. Once inside the finished grounds, the sight of hundreds of swampy white oak trees coupled with the outrageously powerful sound of cascading waterfalls was juxtaposed with a view of the newly erected Freedom Tower as its backdrop. The ever-present sounds of taxicab horns and city buses lent a feeling of normalcy to the day. This contrast served as a respectful reminder of the sheer magnitude of the disaster and the enormity of lives lost while understanding that the city was recovering and rising above the devastation.

Waist-high bronze panels listing the names of the victims of the terror attacks surround the two acre-sized reflective pools. The pools are exactly situated where each tower formerly stood and 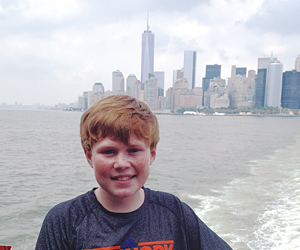 the name of every victim is grouped with those people who were believed to be together when the towers crumbled.

One of the most striking visions was the occasional single white rose poking through an engraved name, indicating a recent visit by a friend, loved one or caring stranger.

Another noteworthy display is The Survivor Tree, a tree that was saved by firefighters who found it while clearing out the site. It stands tall and proud, and its roots are deeply planted on this hallowed ground.

Going to a memorial such as this helps to put in perspective that human life is precious and that we must learn and grow from people’s heinous acts, and teach ourselves and our children what to do and what not to do moving ahead.

The Manhattan skyline with its iconic Twin Towers as we once knew it obviously and sadly exists no more. But as a representation of rebirth and resolution, the impressive 9/11 Memorial and the Freedom Tower (also known as 1 World Trade Center), which stands 1776 feet toward the sky and is now the largest building in the Western Hemisphere, will serve as a representation of rebirth and hope. One World Trade’s observation deck, occupying the 100th through the 102nd floors will open in 2015 and will offer a magnificent bird’s eye view of New York City and the surrounding areas.

The National 9/11Memorial in located on Liberty Street in lower Manhattan. Admission is free to all. To avoid waiting on long entry lines, reservations can be made in advance either on line or by phone. There is a mere $2 registration fee for advance admission ticket purchases. See www.911memorial.org for further details.