World Octopus Day is October 8. I just found this out this year, but why not celebrate? Another thing I learned while researching for this post – octopuses is a valid plural form for octopus. This article from Merriam-Webster was amusing:

“The current champion in the Battle of Troublesome Pluralization is octopus, which, depending on which dictionary is consulted, may be written in three different ways: octopi, octopuses, and octopodes. Such a range of options might prompt even the most patient learner of the language to say ‘what the hell? C’mon, English, get your act together.'”

I always thought it was cut-and-dried “octopi,” but I’ve been wrong before and will be again!

But getting back on track. Octopuses (octopi) are fascinating and worthy of celebration! So without further ado, here are 8 ways to celebrate World Octopus Day:

Supplement your distance learning by reading up on some octopus facts! Here are “8 Crazy Facts about Octopuses” from livescience.com. Perhaps the most interesting fact was that octopuses have been known to eat their own arms when bored in captivity. Yikes!

National Geographic Kids also has a page on Octopus facts. And this article from Scientific American goes in depth on how smart octopuses are, how to measure intelligence, etc. 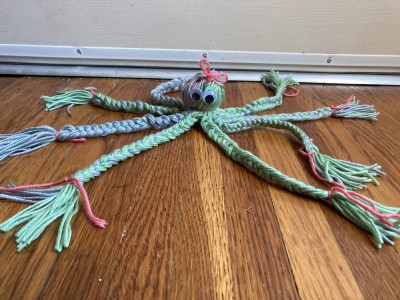 I love a quick and easy craft. If you grew up making yarn dolls, making a yarn octopus is a similar affair. I used this YouTube tutorial. It’s easy to follow along with, so give it a watch if you’d like a more visual demonstration.

Step 1: Wrap yarn around a composition notebook about 85 times. When finished, tie a length of yarn around the wrapped yarn, binding it together. Carefully slide the yarn loop off the notebook. Cut through the loops on the opposite side of the yarn tie holding them together. (I cheated on this step. I had some yarn that was already in a loop, so I skipped wrapping it around the book and just used it as it was. See pic.) 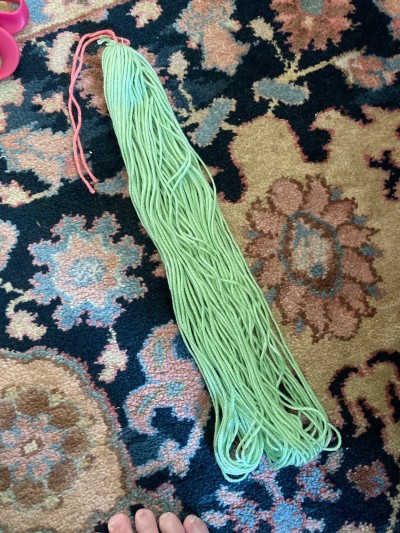 This is what it should look like before you cut the bottom loops free.

Step 2. Divide the yarn in half and lay on the floor. The tied section should be in the middle, with the two halves spreading out on either side. Place your ping pong or other small ball on one half of the yarn next to the tie. Fold the other half of the yarn over it. Tie a length of yarn at the base of the ball, holding it in place. Make sure the yarn is spread evenly around the ball so that it doesn’t show through the yard. 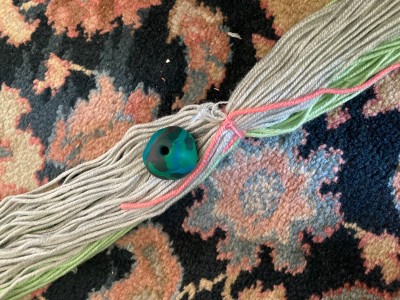 Step 3: Divide the yarn into eight equal pieces. Braid each piece, securing it an inch or so from the end with another length of yarn. 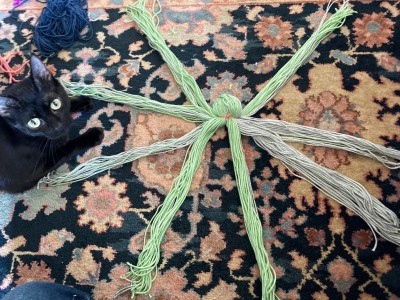 Guess how easy it is to make a yarn doll with a curious cat hanging around?!

Step 4: Add eyes and accessories as desired. I just gave her a cute little bow and glued some googly eyes on with a hot glue gun. But you can add whatever you want! 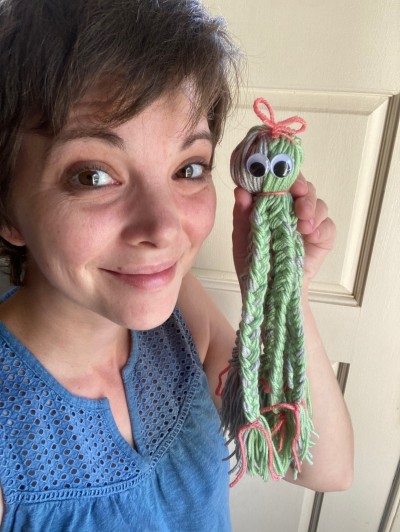 Now I just have to give her a name…

One thing the pandemic has taught me is that you can turn a toilet paper roll into just about any animal – including an octopus. Take a toilet paper roll and cut 7 equidistant slits in it from the bottom to about 1 inch from the top. Paint it and give it a face! This craft might be easier for younger kids to participate in than the yarn version. 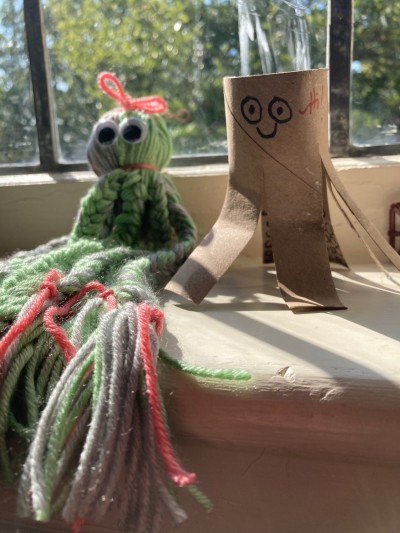 This is the 5-minute variation

3. Leg it to the Library

Tulsa City-County Library has plenty of kid-friendly octopus literature in its collection. Find a list here. 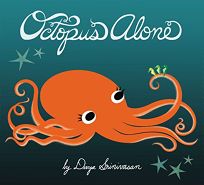 I did a quick Amazon search to look for other titles. One that jumped out was “Octopus Alone” by Divya Srinivasan. Joss loved her “Little Owl” books when he was younger. “Good Thing You’re Not an Octopus!” isn’t about octopuses, but obviously it’d be appropriate on a list of octopus-inspired books. It asks questions along the lines of “Oh, you don’t like getting dressed? Good thing you’re not an octopus! If you were an octopus, you’d have eight legs to put in your pants!” Clearly, the target audience is young children reluctant to accomplish everyday tasks.

There are a few different options here. If you want to make octopus cupcakes, all you have to do is decorate your frosted cupcakes with a central “head” – this could be a gumdrop, colored large marshmallow, etc., and eight candies (such as twizzler strings or gummy worms) for legs. Space the legs evenly around the cupcake, and then add the head in the middle. If you have candy eyes, you can add those to the head to give them extra personality. 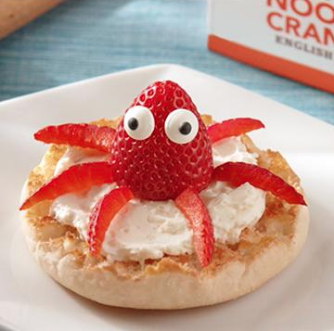 Another idea is is to cut up strawberries and arrange them to look like an octopus. A large strawberry with the stem removed will be the head. Slice strawberries into smaller pieces for legs. Again, you can attach candy eyes to the head for added cuteness. Here’s an example from Thomas Breads on how to turn this idea into a healthy breakfast.

Finally, here is an idea for octopus pudding cups from momendeavors.com. It’s your basic dirt ‘n’ worms cup, only with vanilla pudding (colored blue) instead of chocolate, graham crackers in place of oreos (for dirt) and a gummy octopus on top.

I haven’t seen it, but there’s a fairly new documentary on Netflix called “My Octopus Teacher” about a filmmaker’s “unusual friendship with an octopus living in a South African kelp forest.” Rated G.

I feel pretty guilty even writing that, but local restaurants need extra support right now! A quick search of some of my favorite local restaurants reveals that you can get 5 Spice Calamari at Roka. Yokozuna has octopus sashimi and nigiri, in addition to fried calamari. You can also order octopus sushi at In the Raw.

For the nerds among us, here’s an interesting article from secretsofsushi.com all about octopus sushi. It covers everything from the importance of making sure your octopus comes from a good source, to proper cutting techniques, etc. Octopus sushi is known as tako – a word I first learned through the delightful kid’s show Sarah and Duck. Sarah’s friend John has a pet octopus named Tako.

World Wild Life Foundation has adopt-an-animal kits you can purchase to fund their mission of protecting wild animals and their habitats. Their adopt-an-octopus kit includes a 12-inch plush octopus, photo, adoption certificate, species information card and a gift bag.

“At 11 pounds, it’s tempting to think she’s a baby, but size is not a reliable indicator of age in this species. With their short lifespans, we cannot predict how much time we will have with her, but we are dedicated to providing her with the highest quality of life in our care.

So far, our not-so-giant Pacific octopus has taken well to playing with her aquarists and enjoying fine seafood dinners of crab, herring, shrimp, and scallops!

All she needs now, is an extra warm welcome from all her new friends! You can visit the Secret World of the Giant Pacific Octopus seven days a week, 363 days a year.”

Go to okaquarium.org to plan your visit to the Aquarium, and click here for a video of the new octopus exploring her habitat! 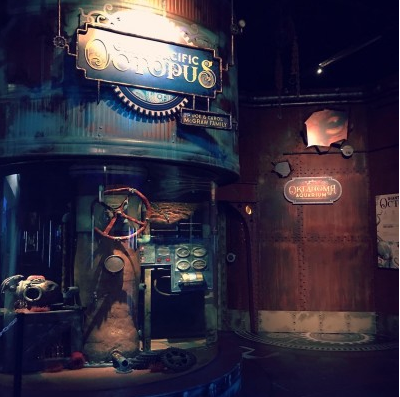 How are you celebrating World Octopus Day? Do you have any favorite octopus-inspired treats or activities? Let me know in the comments! 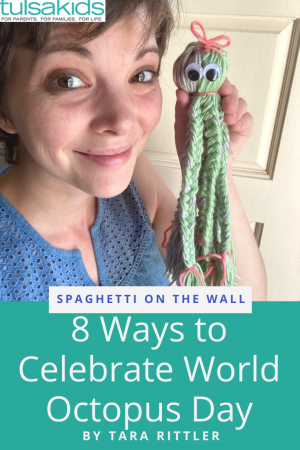