Through quarantine, TulsaKids Editor Betty Casey has been posting a tiny painting of the day, which you can keep an eye out for on TulsaKids’ social media Story! Last Friday, she posted this, with the caption, “Just learned from the Tulsa Zoo that next week is Bear Awareness Week! Tiny painting of the day in honor of bears everywhere.” 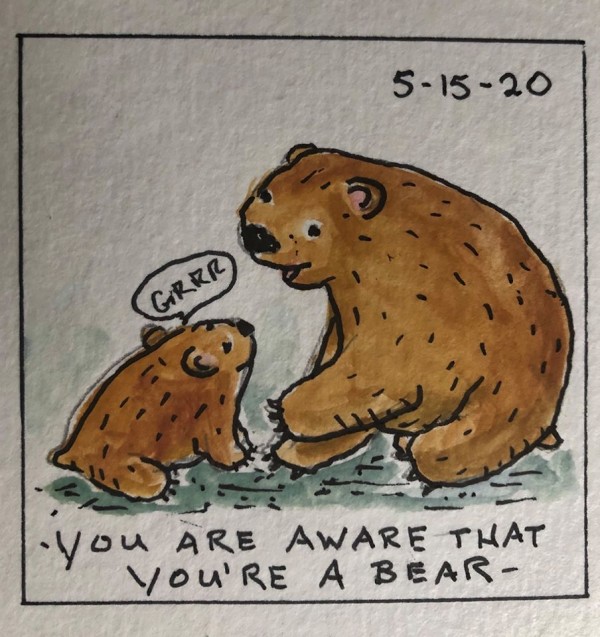 I hadn’t heard of Bear Awareness Week, which takes place the third week in May, until reading this, but immediately thought it would be fun to write a blog post sharing some fun bear-themed crafts to do with kids! Plus, I needed some new inspiration for activities to do with Joss. Win win!

But first, I asked Tulsa Zoo if they could send us a little bit of information about their bruins. They are currently preparing for their reopening, so thank you so much to the zoo for responding to this request!

Another thing that changes throughout the year is the bears’ enrichment preferences. Right now, according to the Zoo’s experts, they enjoy browsing: through bamboo, Arundo cane, clover and small tree limbs. At other times during the year, the Zoo provides large plastic enrichment items filled with food. The bears have to manipulate the items in order to reach the food.

Akoiah and Rainy are both considered “three-strikes” or “rescue” bears. At some point in their past, they were relocated away from humans. However, they had already realized that it was easier to find food in garbage cans than to search for it in the wild, so they did have to be removed from the wild.

Whenever you are ready, make a trip to the Tulsa Zoo and meet Akoiah and Rainy in person!

1. Read a Book About Your Favorite Bear

Teddy Bears feature in several popular children’s book series. Joss has several “Corduroy” books, courtesy of his paternal grandparents–as well as a stuffed Corduroy! Other options include A.A. Milne’s “Winnie the Pooh” books, “Paddington,” “Brown Bear, Brown Bear, What Do You See?” “Going on a Bear Hunt” and of course, The Berenstain Bear and Little Bear series! 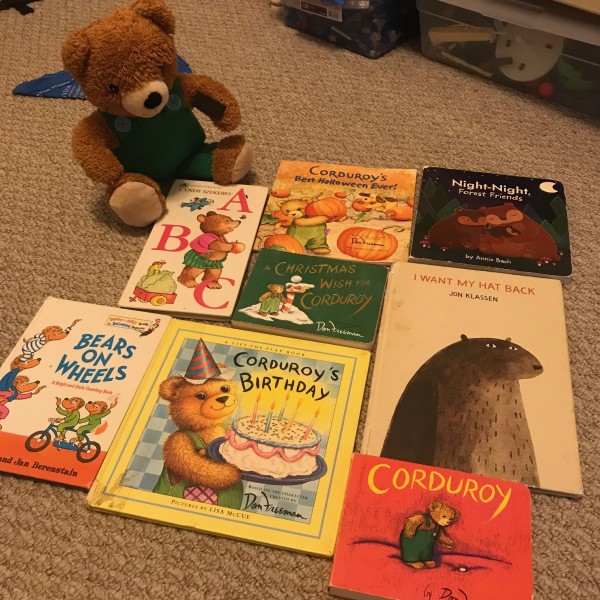 Tulsa Library has a ton of Berenstain Bear picture books in its digital collection, as well as other bear-friendly options. Find some here.

If your child has a stuffed bear, then make sure they grab it for story time!

2. Invite a Bear to Movie Night

Many of the literary bears mentioned above have their own movie versions. 2015’s “Paddington” is a popular choice. And did anyone else grow up watching “Winnie the Pooh” at grandma’s house?

But there’s also Baloo, as featured in “The Jungle Book” and the literal mama bear in “Brave.” Joss cracked up when we streamed “Open Season” on Netflix. Oh! And I almost forgot one of my favorites: Disney’s Robin Hood, with the fantastic Little John!

What are your favorite bear films for kids? 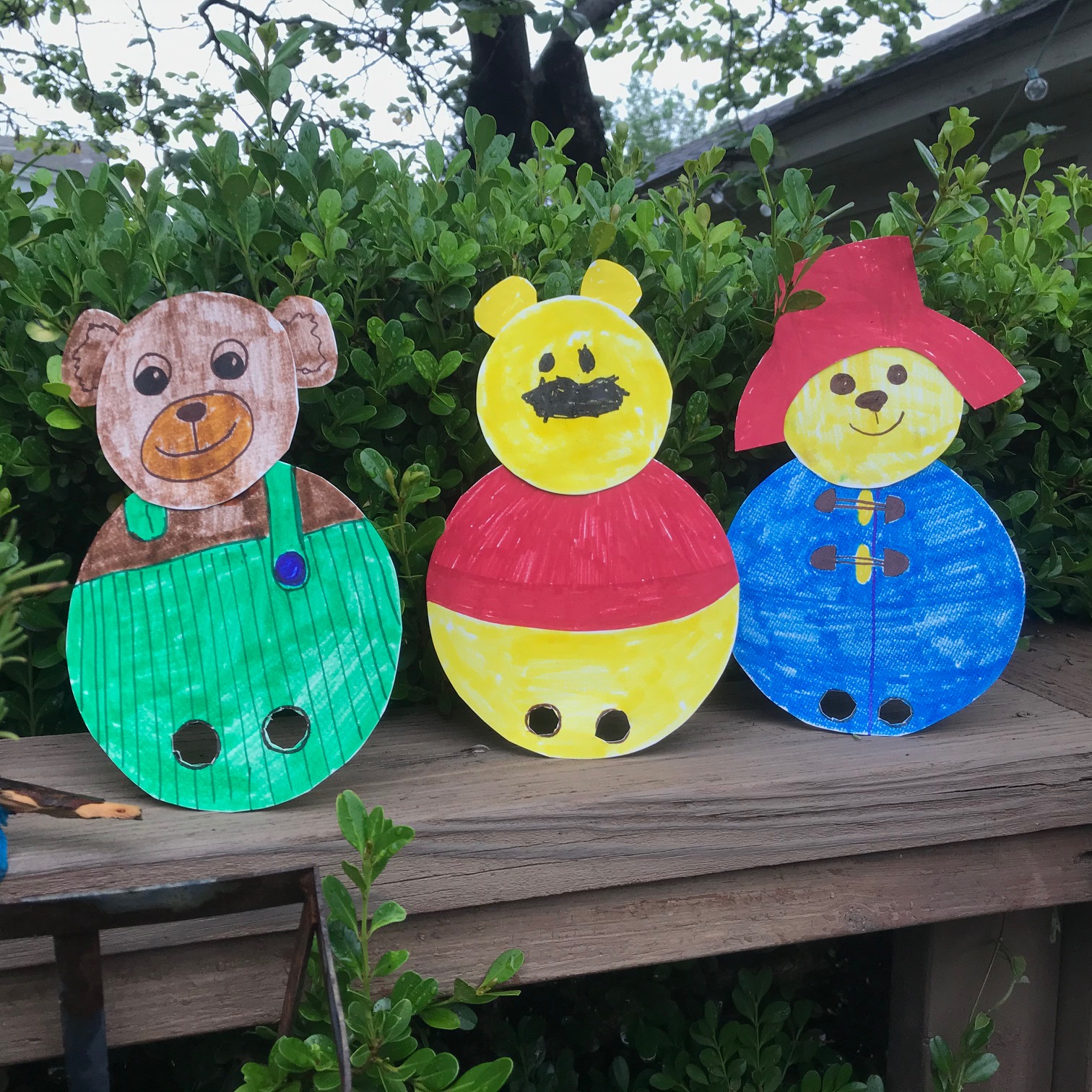 This is a easy project, and fun to think creatively about how to turn a few basic shapes into recognizable bears.

First, grab a piece of cardstock. Trace one large and one slightly smaller circle. I used a saucer and a latte mug. Cut out these circles. Draw some ear shapes on the paper and cut those out as well.

Next, color your bear! As you can see, we attempted Corduroy, Pooh and Paddington.

Then, glue the ears to the back of the head, and then glue the head to the body.

Finally, if you want to turn them into puppets, you can cut two finger-sized holes near the base of the bear, just big enough for your child’s fingers to fit through. Ta-da! 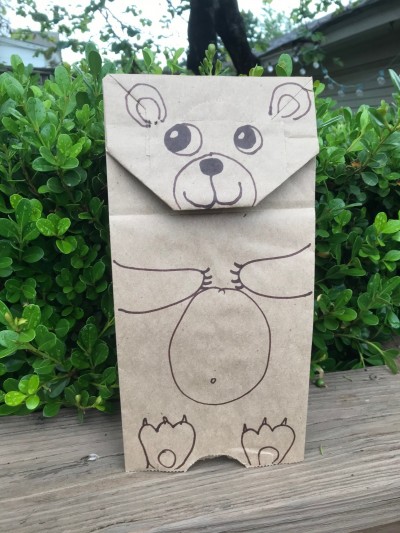 A project so simple it probably needs no explanation! Grab a brown paper bag–or a white paper bag, if you’d like to make a polar bear!–and use a marker to turn it into a bear puppet. We tipped the edges of the mouth area down so it looked like it had more of a bear-shaped face. Make a whole family of these, and your kids can put on a puppet show! 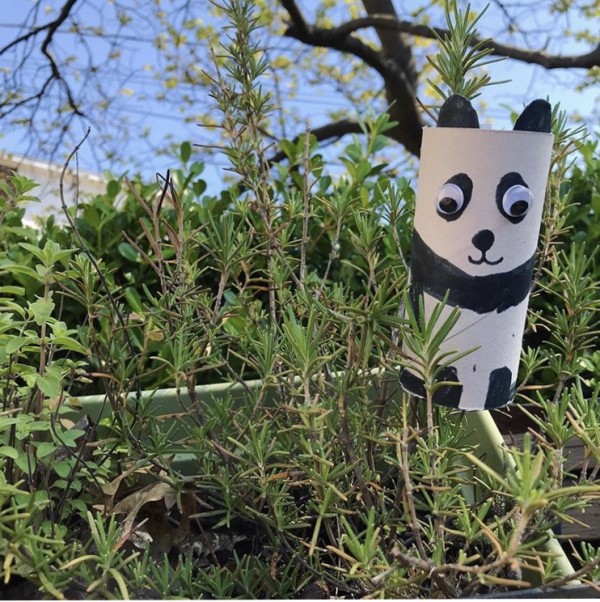 I made this cute little panda bear for the last one-day GISH scavenger hunt. The prompt was to turn a toilet paper roll into a statue of an endangered species. I’ve seen pictures of some of the toilet paper roll statues created by other people, and they are truly elaborate works of art! But I knocked out this little guy in just a few minutes.

Grab a toilet paper roll, and use a black market to draw on panda bear markings: black legs and arms, a nose and mouth, and black ovals for its eyes. Also cut out two ear shapes and color those black as well.

Next, glue the ears in place, and glue on some googly eyes. If you don’t have googly eyes, you can just draw on the eyes.

What other kind of bears can you make?

In addition to reading about your favorite lovable bears, you can also do some research into real-life bears! After all, this is Bear Awareness Week! Tulsa Zoo has a page of Grizzly Bear facts, available here.

National Geographic also some general bear information. Did you know that there are eight species of bears? Click here to learn about them, as well as some of the threats facing bears today.

This falls under the “Movie” category, but Disney+ also has a couple of documentaries featuring bears: “Disneynature BEARS,” which chronicles a year in the life of a grizzly bear family, and “Born in China,” which follows the life of a panda bear baby as well as some other animals and their young.

Take a page from Betty Casey’s book and draw some bears! Use your newfound bear knowledge to draw different types of bears. Maybe label them with some interesting bear facts: Where do they live? What do they eat? How big do they get? 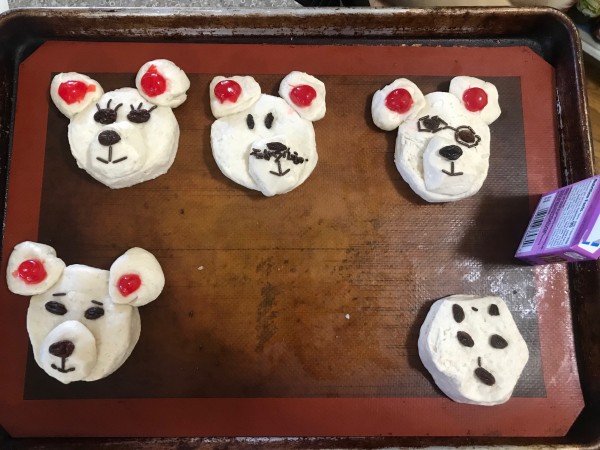 Thank you to one of our Facebook group members, Kristen W. with Just for Kids, for sharing this cute tutorial! Joss and I were excited to try it at home.

To make bear biscuits, you need: 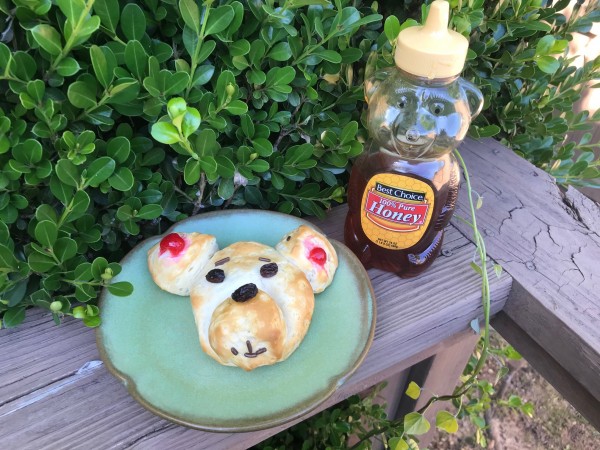 At the beginning of the Coronavirus quarantine, there was a national “movement” for families to start putting bears in places that would be visible to pedestrians. This way, kids could go on a bear hunt around their neighborhood! 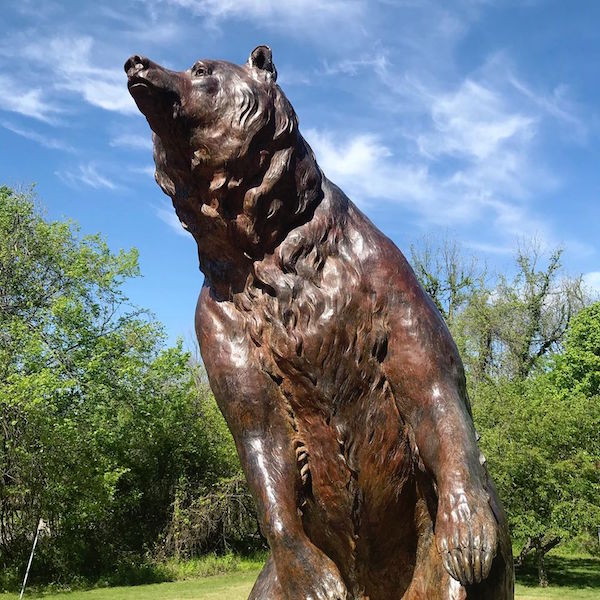 We love this bear statue at Gilcrease!

There is one door adorned with a bear in our neighborhood, along with a sign that says “We can all BEAR this together!” However, I haven’t seen many others, so the success of this endeavor largely depends on your neighborhood. If you’d like to go on a city-wide bear hunt, you can always visit the incredible ursine statues at the Gilcrease Gardens, 71st and Riverside or the Polar Bear at city hall downtown. I always worry about that poor bear in the heat of the summer. Can you think of others?

Joss has been lucky enough to do yoga at school with I AM Kids Yoga. Through quarantine, she has started offering Zoom classes to the school every Friday. One of the best parts is listening to the “Going on a Bear Hunt” song. The kids get to hop in a boat (Boat Pose!) and strike many other poses as they go on their bear hunt adventure.

Cosmic Kids Yoga also has a couple of Bear Hunt yoga videos available. Here is a fifteen-minute version, but it looks like there is also a longer version on YouTube, for those wanting 30 minutes to themselves instead of just 15! Enjoy! 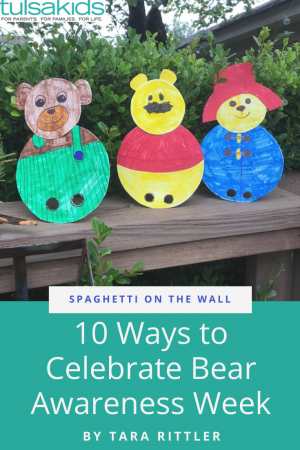