10 Easy Things to Do With Balloons

Several months ago, Joss visited a friend and came home with two balloons that ended up living in his room for the next few weeks. He was absolutely delighted by them. This is probably why, when social distancing hit, I was inspired to purchase a bag of 100 balloons.

So what can you do with balloons? We’ve been having fun exploring this question! Here are some ideas:

Perhaps the most obvious of ideas, but it can still keep the kids entertained! See who can keep their balloon airborne the longest. You may even want to offer a prize for the winner, just to keep their interest longer.

Other competition ideas: Who can throw their balloon the highest? The furthest? Who can bounce it off their hands the most times?

We don’t have enough space in our back yard to do this, but you could host your version of a Balloon-inspired track meet.

Option 1: Each runner places a balloon in between their legs. Whoever gets to the designated finish line first is the winner! If you drop it, you have to return to the starting line.

Option 2: Place a bucket of balloons on one side of the yard. Each runner has to run to the balloons, grab one out of the bucket, and pop it (preferably by sitting on it) before running back to the starting line. This can either be done as a relay or as individuals. Repeat until all the balloons have been popped. Whoever pops the most is the winner!

We learned about this one from Betty Casey’s science experiments blog. So head on over there for instructions! Joss really enjoyed it and can’t wait to do it again. 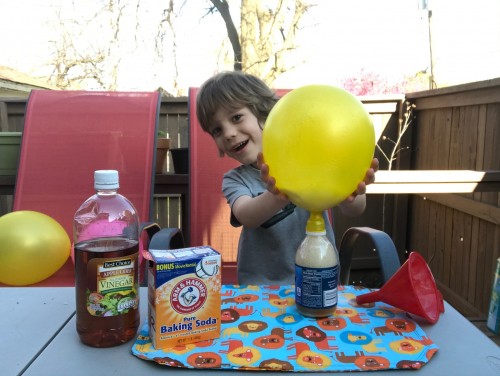 There are many ways to make a stress ball using balloons, and I’m pretty sure we went with the simplest one. All you need is flour, a funnel, a small plastic bottle (or other similar container) and a balloon!

Insert your funnel into the top of the plastic bottle, and slowly pour in flour until the bottle is about half full. I’m guessing we used 1/2 to 3/4 cups of flour for ours. 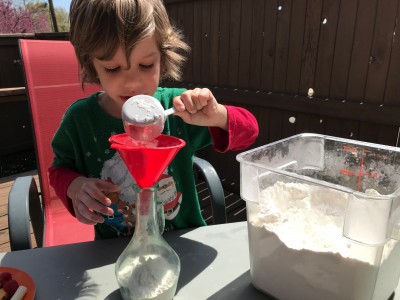 Next, remove the funnel and blow the balloon up till it is about the size of your head. Without letting the air out, stretch the open end of the balloon over the mouth of your bottle until it’s sealed.

Turn balloon and bottle upside-down so the flour exits into the balloon. 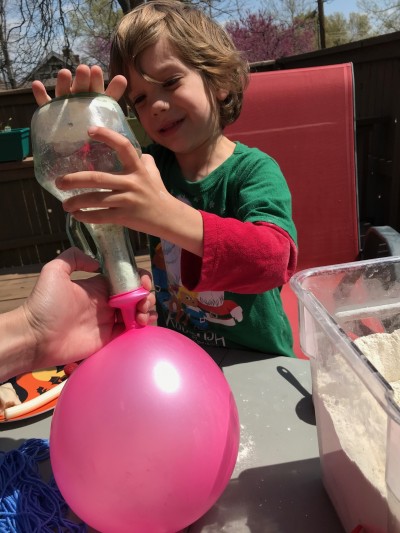 Of course, it wouldn’t be complete without a silly face, so grab a Sharpie and turn your stress ball into a cheerful friend. 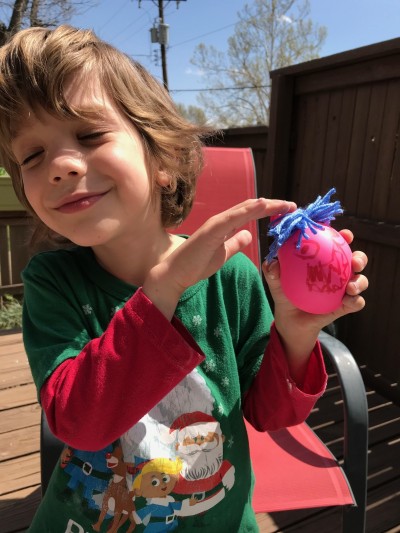 This one may have been more of a fail for us, but there is photo evidence all over the internet that, merely by using yarn, glue and a balloon, you can make a pretty impressive ornament.

Step 1: Blow up balloon (not too large, but it should be round.) Pour glue into a plastic container and add a little bit of water. Stir glue and water together thoroughly.

Step 2: Cut a long section of string, and submerge in your glue mixture. Bring it out, squeezing the excess glue mixture back into the container. Start wrapping the string around the balloon. When you run out of string, repeat the process until your balloon has a good enough covering that it will have an obvious shape to it once the balloon is popped and you’re just left with the yarn “cage.” 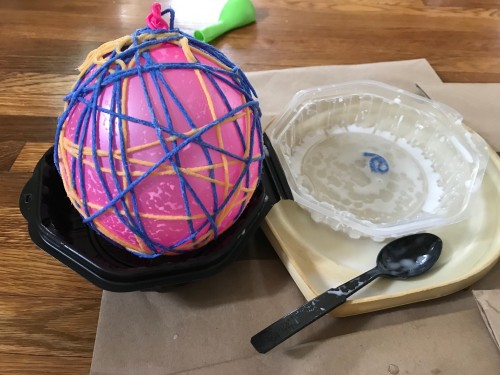 Step 3: Hang the balloon up to dry. We used another piece of yarn, tying one end around the balloon and the other end around a kitchen cabinet nob. Don’t forget to put a paper bag or something else underneath to catch drips! 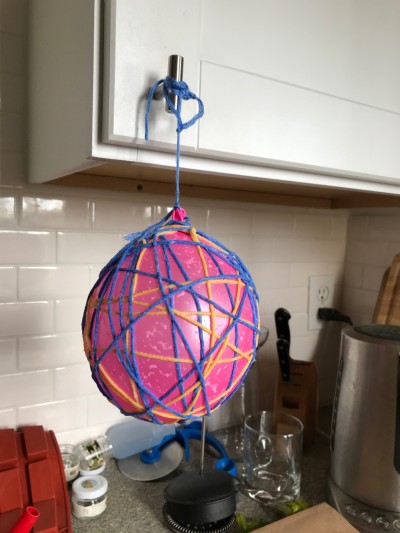 I know we should have used more yarn, but conditions were not ideal, so I quit early.

Step 4: When yarn is thoroughly dry, pop the balloon and carefully remove it. Use a piece of yarn to fashion a hanger so you can easily hang it from a tree. 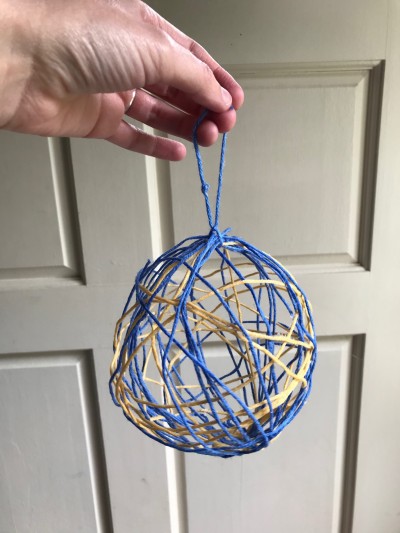 Use Sharpies to draw faces on your balloons! Put on a show! Note: DO NOT use washable markers for this. You will end up with a smeary mess and very colorful kids. 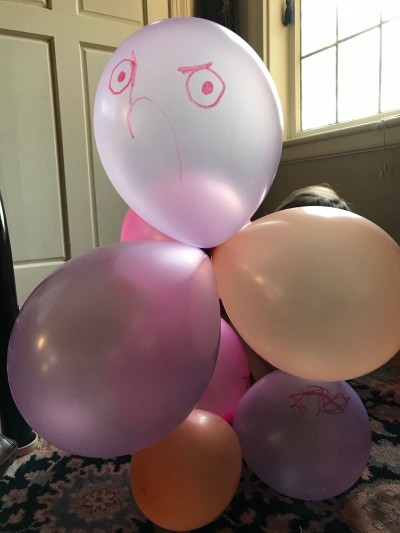 I didn’t come up with this name–it came from a list of Top 11 Fun Balloon Party Games. But the concept sounds pretty amusing! Simply place a large bucket in the middle of the floor, and blow up as many balloons as you like. Hand each child a pool noodle. The goal is to get the balloons into the bucket using only the noodle. No hands allowed!

If it weren’t too windy, I might try doing this outside with our kiddie pool. We only have one pool noodle, but I like the idea of Joss spending a good half-hour trying to accomplish this task.

This idea came from The Crafty Mummy. Build a car out of legos, making sure to create a small window where you can insert your balloon. The open side of the balloon should be placed facing outward. Blow up the balloon, and see how far your car goes!

This activity gives you the opportunity to experiment: How does the heaviness of the vehicle affect the distance it travels? What about the amount of air you blow into the balloon? Can you duplicate this with Duplos or other toy automobiles?

This one sounds like a lot of fun! I probably wouldn’t use it to shoot marshmallows, but if you had pom poms or some other lightweight, soft, non-messy objects lying around, those could work, too.

Cut the top off of a balloon (not the open side). 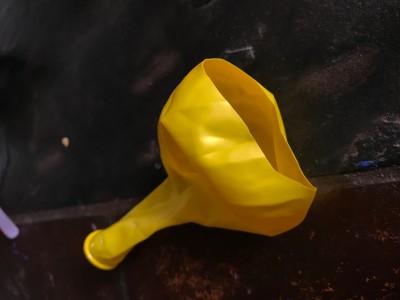 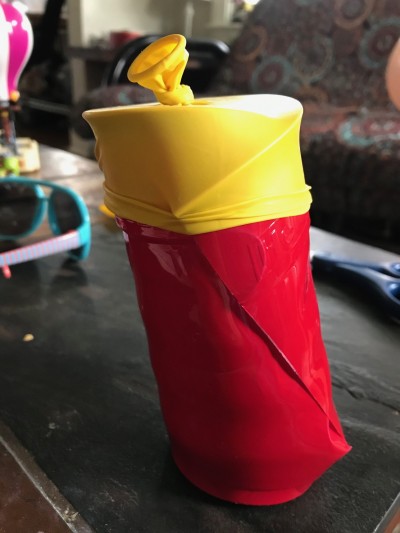 Then, cut off the other end of your plastic cup. Decorate if desired! (Note: We used a Solo cup because that’s what we had, but this was not ideal! The mouth was too large for the balloon to stretch easily, and the plastic too weak…you can tell it ended up splitting and folding up over itself! But ultimately, it still worked…kind of. So try to find a smaller cup that’s a little sturdier than a Solo cup, but not so thick that you can’t cut the other end off.) 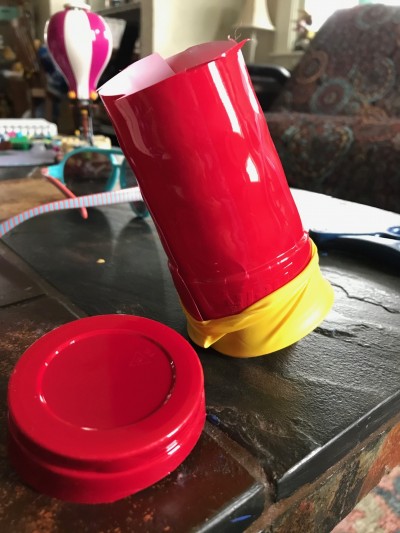 Load your finished launcher with marshmallows, pom poms, etc. Pull back on the knotted side of the balloon, and see how far they go! 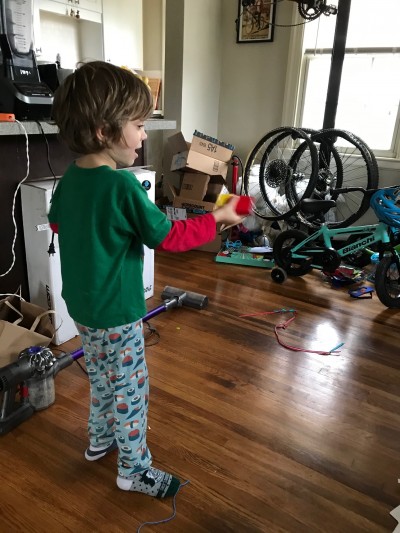 If you have a large enough family, head to the backyard for a game of balloon volleyball! If it devolves into simply hitting balloons back and forth to–or at–one another, no worries. You’ll still have a blast!

Those are my top ten suggestions. I’m also interested in making a Plaster of Paris balloon sculpture, although that’s a little more involved. And these balloon button bowls look really cute, if you have enough buttons and modge podge, which I don’t at the moment. And of course, you can make use balloons as the basis of a Papier-mâché creation–but the last time I tried that, it remained a soggy mess. I’m not ready to try again! One final idea: Balloons can be used to make the most adorable chocolate bowls, perfect for elevating your dessert to the next level!

What are your favorite balloon games or other activities? I’d love more inspiration! 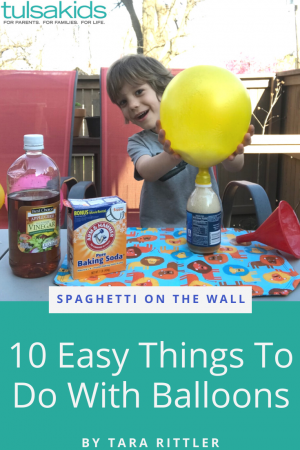 Categories: Spaghetti on the Wall
Tags: at home activities