Two Is Not So Terrible

As Joss approaches his third birthday, I want to advocate for erasing the phrase "terrible twos" from our collective vocabulary.

I grew up hearing the phrase “terrible twos,” as I’m sure many (if not all) of you did. Ironically, once I had a two- or near-two-year-old, I more frequently began hearing that two isn’t so bad, it’s three you really have to watch out for. Which isn’t exactly reassuring.

Regardless, I have a natural distaste for labels like “terrible twos” and “threenagers,” which set parents up to expect the worst from their kids. Why would I want to spend two years of my son’s early life expecting him to be difficult and moody? And I’m certainly not going to claim that the past year has been easy: Joss can be difficult and moody and headstrong, etc., but he can also be delightful, thoughtful, kind and downright hilarious. So here are ten milestones/developments from the past year that will hopefully show any parent entering the two-year-old phase that they don’t need to worry. 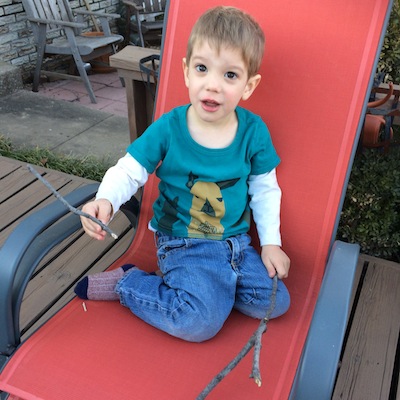 It amazes me when I remember that a year ago, Joss was barely communicating, whereas now he can talk, sing (in a monotone, but still, it’s adorable), and even make jokes (see below)! This obviously makes communication easier, not that it’s never a challenge to figure out exactly what he wants, but for the most part, we do very well.

It’s so fun to see Joss’s sense of humor develop as he begins to make his own jokes. For example, if I ask, “What does the cow say?” He might say, “Meow!” Not because he doesn’t know the correct answer is “Moo” but because he knows it’s funny to say something wrong/unexpected.

It is challenging that sometimes Joss doesn’t recognize the difference between reality and his imagination, but it’s still a joy to see his imagination and creativity develop. For example, we were walking home one day and he got upset because I had taken a drink from an imaginary cup of coffee he’d handed me, not, apparently, to drink. I had to pretend to spit the coffee back out and return the cup. And again, the other day, he started crying when I tried to put him in his car seat because “There is a monster there and I don’t want to squish it!” He wanted to share the car seat with this invisible monster and didn’t understand why I was being so cruel as to make him take up the entire seat.

Just last week, Joss picked out a green pepper at the grocery store for “Miss Emily,” one of his teachers at school. It is touching to see him bond with others and to think about them even when they are not there. He also picked out peppers for Grandma Dana and Grandpa Jim, but as they live in another state, those unfortunately didn’t reach their recipients.

No, don’t be jealous, Joss can’t really read at almost-three years old, but we have gotten to the stage where he can fill in words in some of his favorite books and where he can pick up a book and look through the pictures on his own, keeping himself entertained for at least a few minutes. I’m so glad that his love for books has continued to grow this past year and hope that never changes!

I know this could be a whole post in itself, but…you know, someday Joss will be a teenager, so I’m just going to say that, although we are still in the middle of potty training, we should be mostly done by the time he turns three, and that is a huge relief! No more spending $2,000,000 at Target (it feels like) just because I needed to run in for diapers. 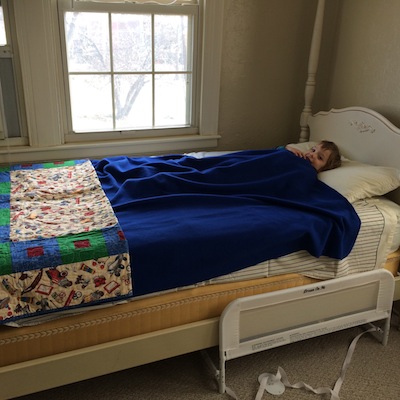 Oh yeah, and no more crib!!

7. Going to Events Together:

Although I am definitely a homebody, I’ve started going out more, mostly because of my job as social media editor for TulsaKids. Got to get those Instagram photos! For most of these events, Joss has been my buddy. We’ve gotten to enjoy fun things together this year like Philbrook’s 2nd Saturdays (not to mention Imaginations Days at AHHA and Funday Sunday at Gilcrease!), the Tulsa Library’s Summer Reading Program, visiting the Red Dirt Dinos at Tulsa Children’s Museum, etc.

Of course, getting out and about with a two-year-old isn’t exactly easy. We went to Global Gardens’ Love Your World event on February 17, which was wonderful–Tulsa-area students had organized the event, setting up information booths and cooking food representing countries from all over the world–but it did also mean that at some point, I was carrying a plate loaded with food in my left hand and a plastic bag/paper passport/cup full of goulash in my right hand, while Joss tried to run away. Pro tip: Try to maintain at least one free hand when accompanying a toddler anywhere.

This is the first year Joss has been able to talk about his friends and call them by name. “Let’s go to Zella’s house!” is a frequent refrain, and he also enjoys talking about his friends at school; it’s fun for me to listen and try to get a feel for how his social interactions might go throughout the day.

Last year in Joss’s parent-teacher conference, his teacher described him as a “quiet observer” who likes to watch what the other kids are doing before jumping in. Part of that may have been because it was his first year and he was only there two days a week, whereas many of the other kids already knew each other pretty well. But this year, he is definitely more enthusiastic when we get to school, often running into his classroom before I can shout “Good-bye!” I also was pleased to see him walk up to one of the secretaries at the front, asking about the giant phone and two-screen computer on her desk, even though he probably doesn’t know her very well. It’s reassuring to see him so at home in different spaces, not afraid to be himself and ask questions. 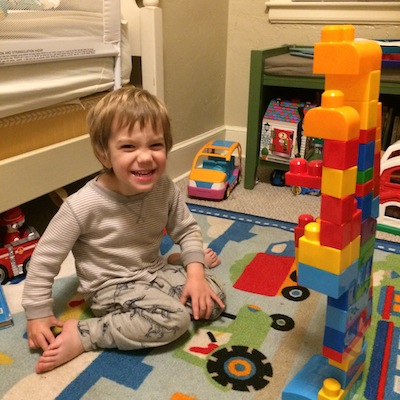 Previous blog posts have shown that I enjoy trying to let Joss “help” in the kitchen, which I can’t imagine I did a year ago. He enjoys stirring things for me (always sneaking a pinch here and there), plunging his hands into the tub of flour and standing on that same tub of flour so he can watch what’s going on on the counter. He frequently requests that we make cupcakes or cookies, which is probably not a healthy habit, but it’s still fun to be able to share my love for baking with him–even if it’s messier that way!

There you go! See? Two may be challenging, but it is by no means terrible.