Toddler Time at Bounce U and Build-a-Bear

It feels like the girls are changing every second! Their 2nd birthday is quickly approaching and I feel like the last year was a complete blur. I'm so thankful for photos (see below) that help trigger the memories and places of last year. 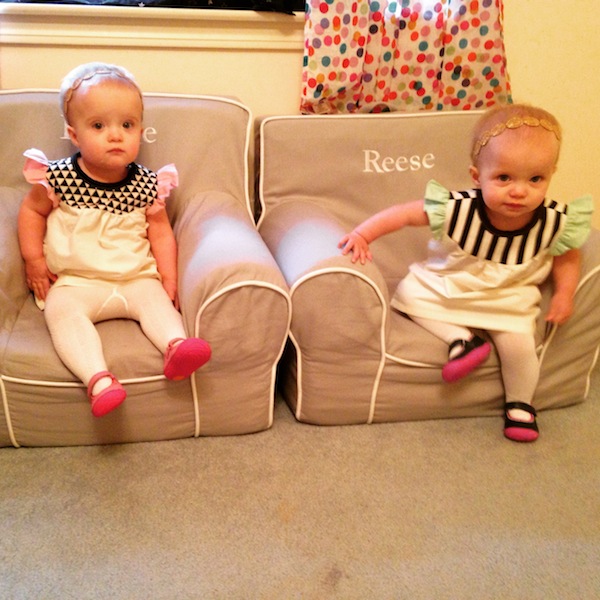 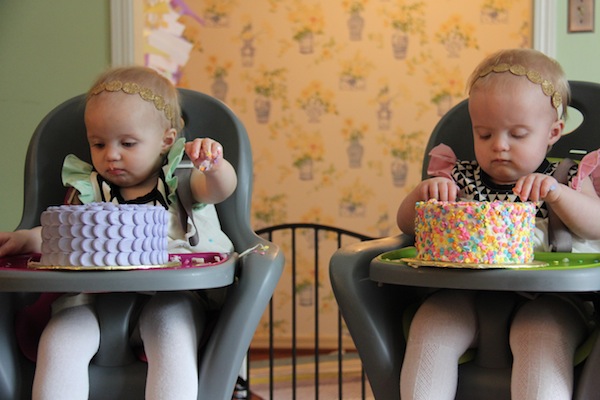 Because we've had such a mild winter, we've been spending the majority of our time outside, but we did venture out to a few new places this week.

The first new place was Bounce U. Jumping on inflatables in Dallas was something we did weekly. It kind of scared me there, but the facility was small. Walking into Bounce U in Tulsa I was trying to figure out the drill. It seemed like the entire group of preschoolers there all knew the protocol. One mom even came up to me and said we looked a little lost. We were trying to wave through the group of regulars. Luckily, Bounce U offers 3 age-options throughout the week, so that your younger (and smaller) ones aren't bouncing with the older (and bigger) kids.

Both of my kids are still under 2, so one got to jump for free (score!). Socks are required and you need to fill out a waiver. Once all the logistics were done, the girls sprinted into the play area. Looking around I still did not know if there was a space for kids that were younger. My kids run up to the tallest inflatable (of course) in the entire building. It is actually called Daredevil Island.  All of the sudden my stomach dropped –  like the feeling you get on a roller coaster.  When random parents start saying behind me “where is the parent to those girls?” I realized I wasn't just being a wimp. By this time, my girls aren't  just already on the top of the sky high inflatable, they're up there dancing. Thankfully, I notice a Mom is up there, so I threw off my shoes and ran to the top to get them. Now as I am up there I realize I have no idea how we're going to get down! So what else can you do? I grab them both and we jump together to the pillowy inflatable that catches us. The girls are having a blast! Laughing, running and wanting to go up the stairway to the sky again. I quickly bought some socks and joined them. 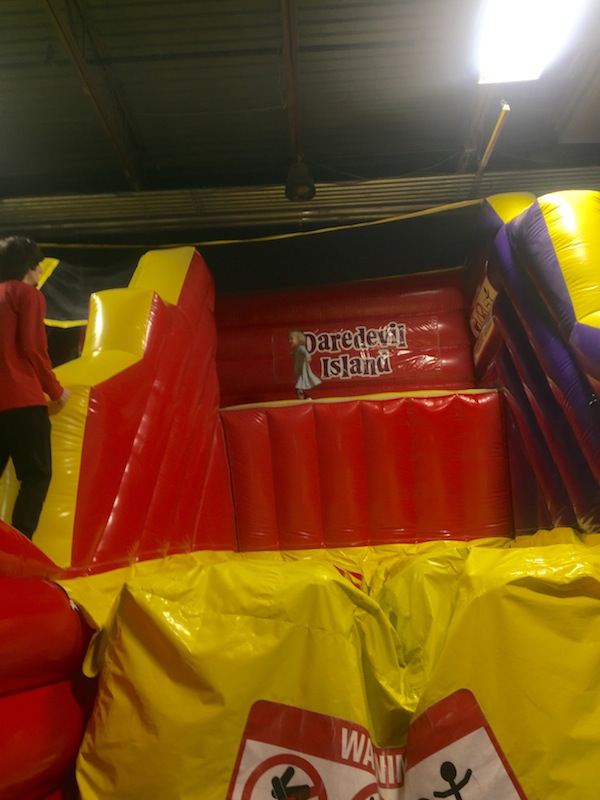 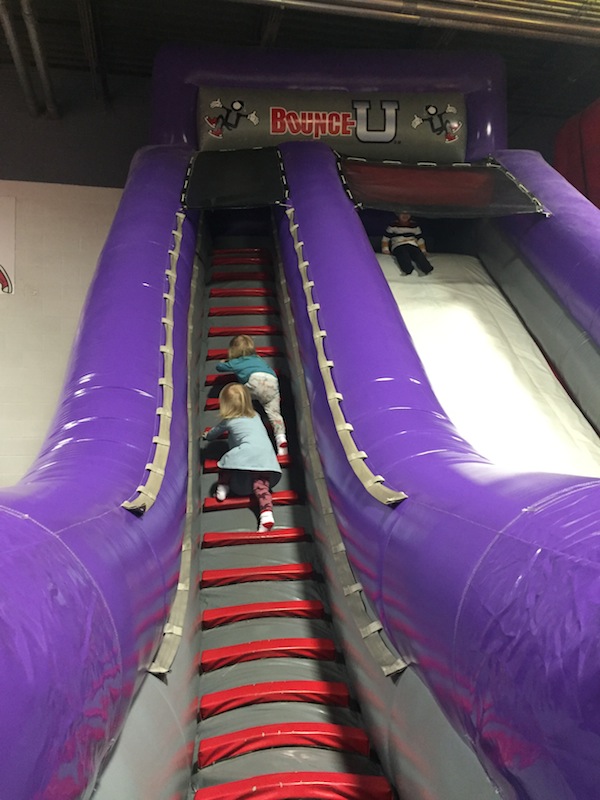 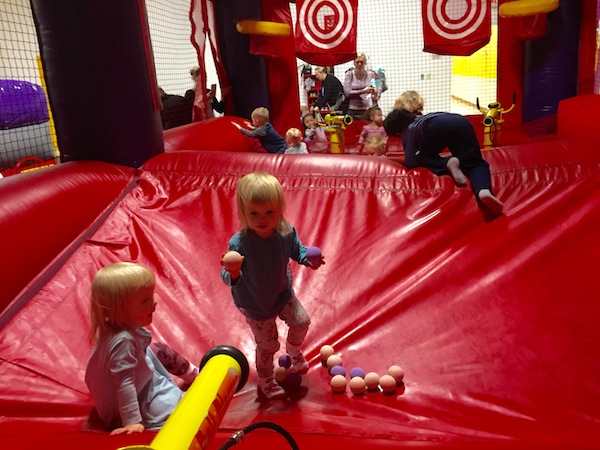 Once we return to the main room I found an area where we can slide, instead of jump, to the bottom. There is also a neat area that has foam balls. The balls shot out of these mini cannons and kids can jump in the middle. The girls really enjoyed this area. My mind was still shaken from our big jump. I am sure it is no shock to you –  I am not an adventure junky.

If you have younger children, I would recommend going during the preschool playdate. During Open Bounce, it can naturally get a little rougher with the older kids. And just when you're getting the hang of it, another door opens to a whole new bouncing experience – the place is huge! I hear this is a great place for a birthday party.

Up next on our weekly to-do list was Build-a-Bear to kick off the girls' birthday week – which gave me an excuse to head to Woodland Hills Mall. In Dallas, we went to Northpark Mall almost every weekend morning. Our kids are early risers so getting out of the house early to let them run and get java is a must for us. Once it is warmer in the morning we have more options, but until then, the Starbucks at Woodland opens at 9 a.m. The line was steady, but they made the java pretty quickly. The carousel was open too, so the girls wanted to hop on. I wish there was a little more going on with the kids' area at Woodland Hills, but Build-a-Bear did not disappoint! 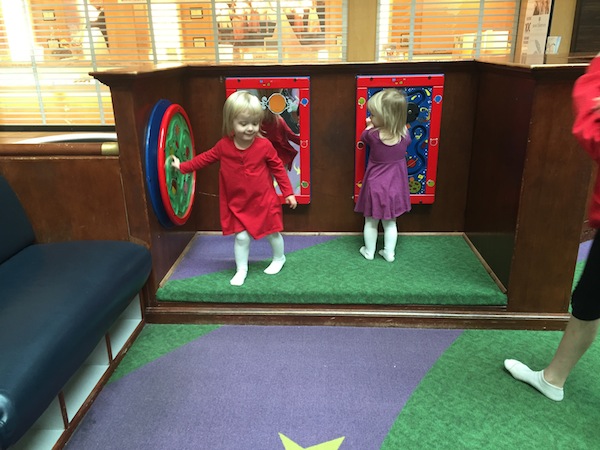 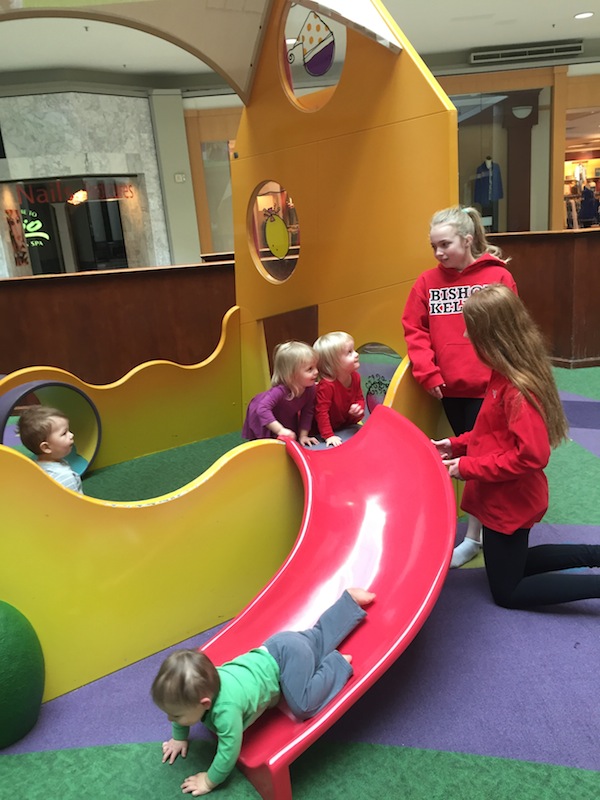 I am still on the hunt for a good indoor morning activity that starts before 10 a.m. Any tips?!?

Now, with another birthday quickly approaching, I'm going to go eat some Girl Scout Cookies and head down memory lane with old photos of the girls and wonder where in the world the time has gone.

Stress taking over me

Happy to receive my mom and nephews in Oklahoma.