The following is Joss’s birth story as I wrote it shortly after his birth in 2015, with some minor editing. I wanted to add that we took a birth class with Chris Maricle of New Joy Christian Childbirth Education and loved it. Chris has mostly retired now, as far as birthing classes, although I believe she may still offer periodic classes, so follow the business on Facebook for updates if that’s something you’d be interested in. Our goal was a natural birth, but we tried to stay open-minded and flexible.

Joss Rittler was born at 6 p.m. on Sunday, March 15, 2015. He weighed 6 lb 12 oz, measured 20 inches long, and received 9s on both of his APGAR tests. Hooray for a healthy baby! We (Tara and Daniel Rittler) were even happier about his birth because we had been scheduled to go in to St. John’s at 8:30 p.m. that day in order to begin the induction process. Although that was not what we wanted for our baby, the doctor had some concerns about his growth rate and some swelling and blood pressure issues that I (Tara) was experiencing. (The blood pressure was borderline-high—not terrible, but enough to cause some concern. [Editor’s Note: Don’t eat salty edamame when pregnant. We took my brother to Yokozuna for pregnancy-appropriate sushi a couple weeks prior, and by the end of the meal, my feet and ankles had swollen to a painful degree.]) We were willing to go along with what the doctor recommended because we have been very happy with our decision to use her and trust that she has our family’s best interests in mind. However, many people started praying that somehow Joss would decide to come on his own that day—and those prayers were answered! (I was also very grateful to a couple friends who shared their experiences with induction with me so that I felt more prepared for that possibility, as I really wasn’t sure what to expect, since we’d mostly been preparing for a natural birth.) 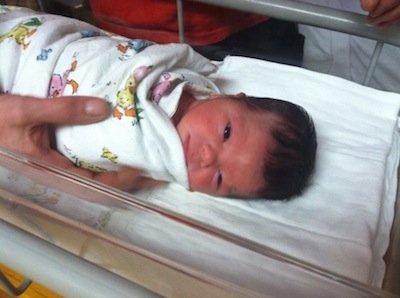 On Sunday morning, we went to Reasor’s for groceries, wanting to stock up before the big day. While in the grocery store, I experienced some leakage, but it wasn’t until we got home and I was talking on the phone with my dad about cat allergies that my water broke completely. I hung up abruptly and ran to the restroom, after which I told Daniel what had happened. He was already making lunch, so we ate a good meal of ribs, greens and beans before calling the hospital. They told us to come on down, so we finished getting ready and left around 1 p.m.

At the hospital, we checked in and they took us to the initial exam room, where they hooked me up to the fetal monitor and double-checked that my water had indeed broken. It had, and I was dilated to 2. It was about this time that contractions started setting in. The nurse who helped us through the check-in and labor process was named Stephanie (she was awesome and sent us a lovely thank-you afterwards.) The hospitalist working that day was Dr. Gibbons, who recommended that we stay at the hospital and head to the labor room.

The labor room was large and set up with a couch, chair, artwork on the walls—and of course the labor bed and fetal monitor. They gave me a hep block and hooked me up to the fetal monitor after making sure I’d used the restroom. I was on an all-clear-liquid diet, which thankfully included ginger ale and popsicles 🙂 Although I wanted to be able to move around eventually, initially (and, as it turns out, the entire time) it was nice just to lie in bed and rest a little bit. My biggest surprise was that even the between-contraction time was a little painful. I had anticipated moments in which I felt normal, but it was pretty much solid discomfort. Daniel did a wonderful job of massaging and encouraging the entire time. After a couple hours, the doctor came in and said that the monitor did not seem to be picking up regular contractions, and that they would want to go ahead and use pitocin if the vaginal exam did not reveal any progress. However—hooray!–I was actually dilated to a 5, and Daniel was able to assert that I had been having very regular contractions, the monitor just wasn’t picking up on them.

About 10-15 minutes later, the contractions got much stronger, and I felt like I would like to go ahead and get some Stadol—because the thought of going through another several hours at that intensity was overwhelming! Daniel reminded me that that was not what I originally wanted and told me that if I wanted the drugs, I would have to be the one to call the nurse. I was in enough pain that I went ahead and requested the Stadol from Stephanie. It was supposed to kick in about 30 minutes later, but after 20 minutes (with contractions still very strong), I felt like I needed to start pushing. Stephanie was called again, and did another vaginal exam—9.5! She told me to lie on my other side because it was only on one side that the cervix was not fully dilated. A couple minutes later, I kept feeling the need to push, and Stephanie called Dr. Gibbons and another nurse, telling them to get the room ready. There were about 2 good contractions in which I wanted to push but couldn’t because the room wasn’t ready. After that, they put up the stirrups and reminded me to curl around my stomach. I was kind of yelling/moaning through each push, so they also reminded me that that wasn’t helpful, and to just push quietly. It was very painful for about 2-3 contractions, but then I felt the baby slip out! I don’t remember this, but Daniel saw a bunch of fluids rush out along with the baby and heard Dr. Gibbons say, “Whoops, you got Stephanie!” The total labor lasted just 5 hours and the pushing time was probably no more than 15 minutes (whoo!). I felt a little silly for asking for the Stadol since it didn’t really have time to kick in fully, but I didn’t know that I was in transition at the time! (The doctor/nursing team wouldn’t have given me the Stadol had they realized this because they don’t give it out after 8 centimeters.)

After the birth, we did skin-to-skin. Joss was born with a full head of black hair—and an awfully hairy back, too! I needed a few stitches due to tearing—Dr. Gibbons said she very, very rarely does episiotomies. She showed Daniel and me the placenta after it came out, explaining the different parts and functions. She said that the placenta is her favorite organ because it has so many uses that must be replaced by several different organs outside the womb. Also, Daniel cut the umbilical cord after it stopped pulsing (We didn’t need to ask about this, that’s just what they did.) 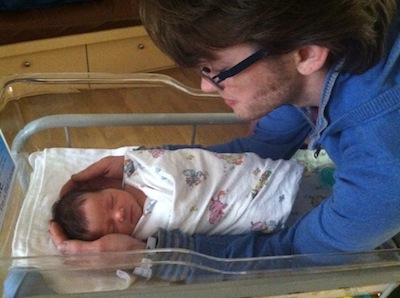 We kept Joss with us for several hours—after being taken to the recovery room, the nursery nurse said to just let her know whenever we wanted her to take him for his first bath, etc. The hospital staff as a whole was very friendly, encouraging, and flexible. There wasn’t a single nurse we didn’t care for, and they made sure to introduce the new nurses at each shift change. Because it was still early in the evening but too late for cafeteria food, Daniel walked to Wendy’s and brought back dinner. It was delicious. 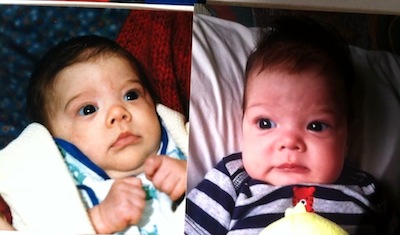 We are loving being parents, and so grateful for a healthy baby. We enjoyed our experience at St. John’s (there was even a breast-feeding clinic the next day that the new parents are supposed to go to, as well as lactation consultants who visit you a couple times before you’re discharged.), but are glad to be home and learning how to care for this little guy! We love you, Joss! 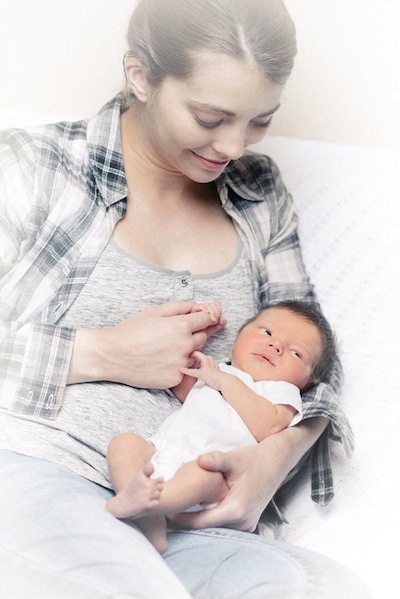 Ushering in the months of wearing nothing but nursing tanks! Photo by my dad, Aaron Bowen.