Joss’s birthday is tomorrow – he’s turning seven! We are going to celebrate with a small “Happy Cat Wizard Party” at the end of the week, making Harry Potter-inspired polymer clay cats. The birthday cake of his dreams is half-strawberry, half-vanilla ice cream cake with blue frosting. And a cute cat wizard on top, of course. Thanks to Big Dipper Creamery, I think this is going to happen. I just need to buy some icing pens to decorate the plain, frosted cake ahead of the party, and then cross my fingers that I can draw a decent cat! 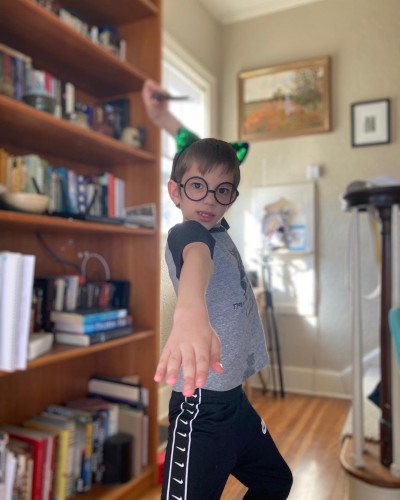 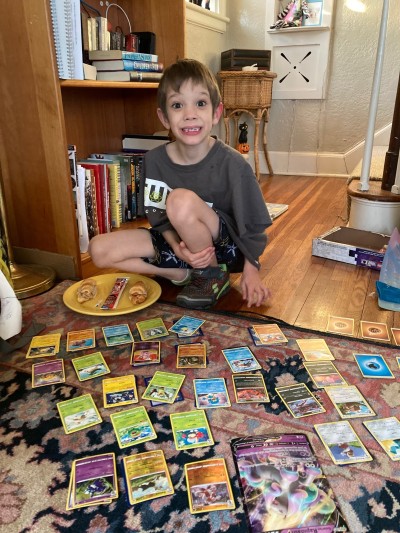 We discovered Pokemon this year 🙂

The past year has been interesting, even aside from the ongoing pandemic. I’ve already written briefly about his fear of spiders and difficulties crossing the street to school. So as those two situations escalated, we decided to get him evaluated for sensory issues and anxiety. For the past few months, he’s been going to therapy once a week, learning exercises to help with retained primitive reflexes, which is something I’d never even heard of! We should be just about finished, but can continue the exercises at home.

I’m glad we did it. His therapist is so good with him, constantly working in lessons like good sportsmanship, following directions, holding pencils properly, etc. We’ve gotten the coolest recommendations for games that can help with focus, like Spot It and different memory games. Each session, I learn something new, and he really enjoys it, too.

He’s also been doing weekly sessions with a counselor at school, to address the separation anxiety. He even brought home a homemade quilt from the counselor. She had a couple extras and let him choose one. This is now a prized possession.

It’s just nice to know that he’s got a couple professionals to help and who care about him, because I was kind of at a loss.

Through both of these situations, I feel like I’ve gotten to see a couple aspects of Joss’s personality more clearly. Although full of energy, at school he likes to follow the rules. He may not always focus well enough to finish all his worksheets, but he pays attention and ultimately wants to do a good job.

He tends to get ideas in his head of how things should be. Which can cause issues in terms of completing art projects, where his skill doesn’t always match his vision. But he also can care deeply about things. Like when he wanted to write a letter to a very specific Iditarod racer recently, but another child in his class chose her before Joss had a chance to. He was devastated, having become very attached to this racer. 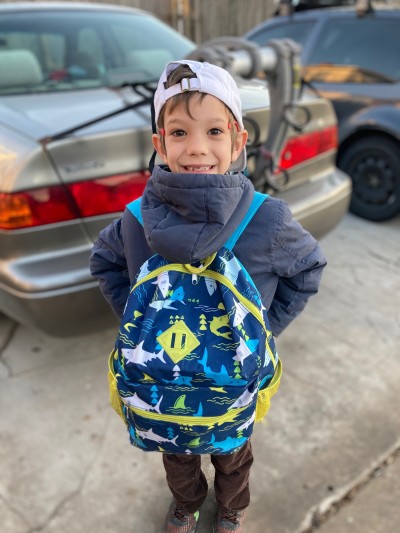 Joss was very excited about Wacky Wednesday at school

When he was crying after school over this, it took awhile before he decided to tell me what was wrong. He said, “You wouldn’t be able to help anyway.” I said I’d email his teacher to see if anything could be done, and that we could write the musher a letter anyway, since her information is online. So hopefully that was a good lesson that even seemingly impossible situations may not be hopeless. And that talking about things is a good thing?

He’s full of big ideas, and generous. He wants to own an island named Joss America someday, where he builds his inventions. All of which he wants to sell for $1 apiece, so everyone can afford them. I’ve tried to talk about manufacturing costs, but it hasn’t sunk in yet. 🙂

One of the best parts about the past year has been watching his reading skills improve! I think I say that every year, ha. But in the past couple months, he read the first “Diary of a Wimpy Kid” book ALMOST cover-to-cover during our nightly reading time. I filled in a few times, when he got extra sleepy. He’s more willing to try sounding out words, and his teacher confirmed that he’s doing a great job. 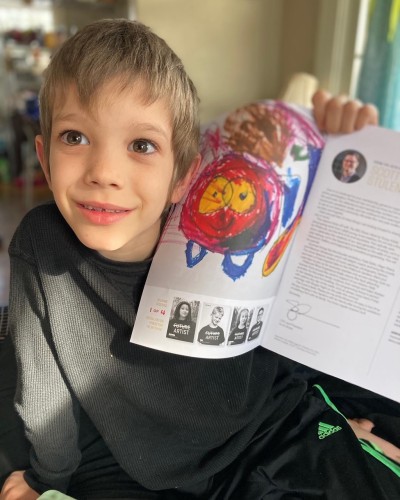 Joss’s piece, “Cheshire Cat,” featured in the recent Philbrook publication and now on display at Philbrook’s The Big Show exhibit! 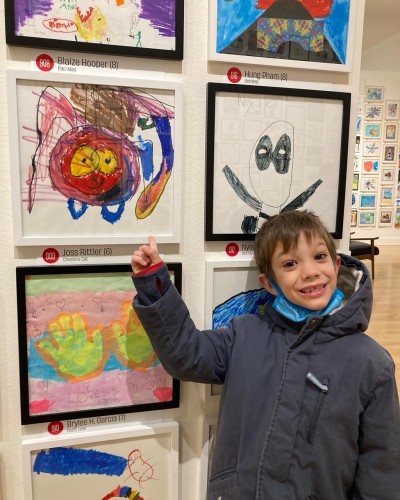 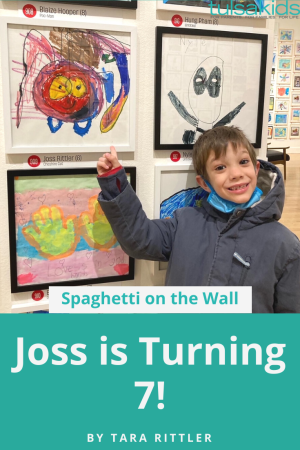