Reflections on the past year as Joss's birthday looms

Ready or not, here it comes–another birthday for Joss!

(As it turns out, I’m not ready-just last week I remembered to ask his teachers about bringing snacks on his birthday, having completely forgotten about this celebratory responsibility! One recommended doughnuts as a much-appreciated but highly cost-effective snack. Good to know! Joss’s request is a cake with people on it…we’ll see about that, ha).

Anyway, I wanted to take some time to reflect on the past year…or at least on the past few months, since I already wrote a mid-year post about how much fun it is to have a three year old (and yes, that’s sans sarcasm), and also because I fear I’d really have to rack my brains to think back farther than the beginning of this eternal winter. And, for the curious or chronologically inclined, here’s the post I wrote last year about this time about how “two is not so terrible.”

Here are some things I’ve been really enjoying about Joss lately:

1. His sense of style

I’m not saying he always has a good sense of style, but he definitely has an interesting one! The other day, he came down the stairs, asking, “Do I look awesome?!” His ensemble was composed of his new “berry”-colored Hot Toast Music Co. T-Shirt, PJ pants, an old bucket hat, gloves, mismatched socks, and sandals (on the wrong feet, of course). The green marker smudge on his nose was an added bonus. I told him, “Yes, yes you do look awesome!” And he responded, “Yeah. I look AWESOME!” At which point he demanded that I go find a scarf to complete the look. 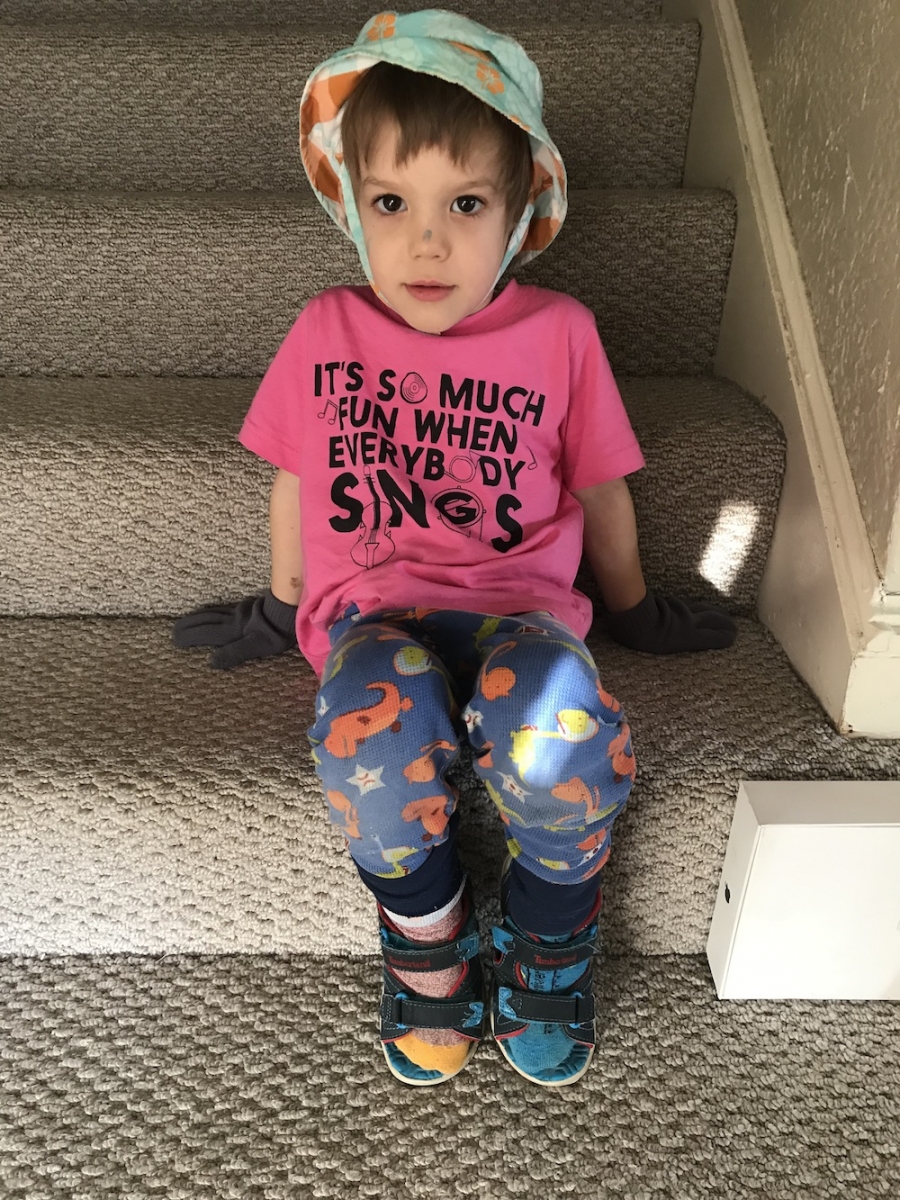 Other recent wardrobe highlights include his “Basil of Baker Street” tweed jacket, which he has fully embraced, to my joy. This paired with a turquoise beanie makes me so happy. He’s also been known to run into the YWCA wearing his “twilek ears,” aka pajama pants on his head–or, more recently, a Kylo Ren mask paired with a Darth Vader bathrobe. So you just never know! 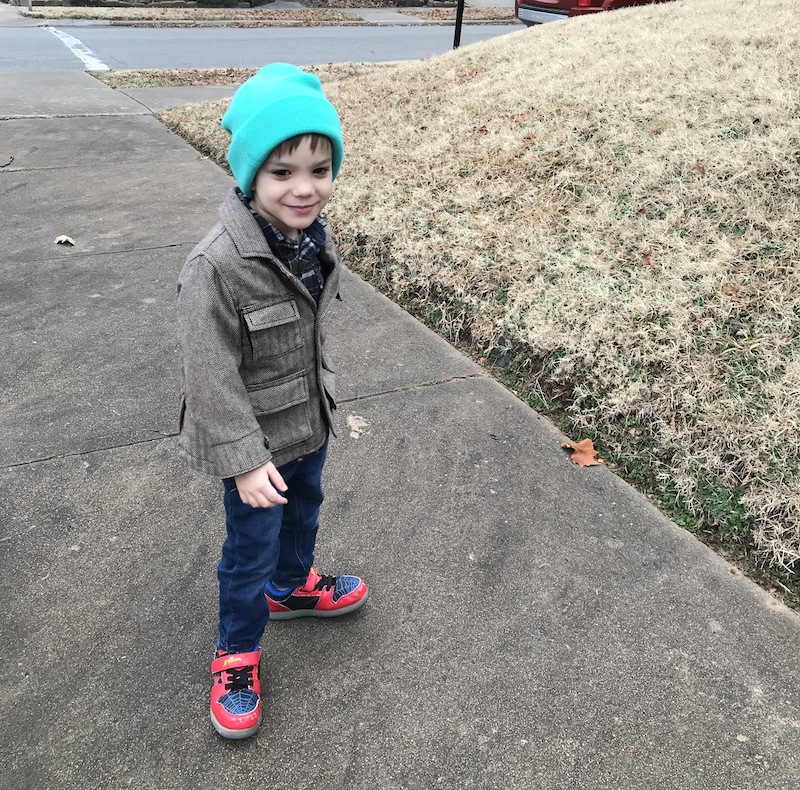 No, the whole year hasn’t been easy–and I do kind of feel like the moodiness has amped up here a bit in the last couple months. There have been some screaming incidents that we are trying to bribe away with the promise of books. But this is nicely balanced with an occasional, “AWWWWW, that’s so CUTE!” or “May I have some snuggles mommy?” And how can you be too upset when a morning meltdown is brought on because he was mad that you scraped the beautiful frost “trees” from the dashboard before leaving for school?

One favorite moment lately–that, to be honest, may have just been a stalling tactic related to bedtime–was when he brought out his box of odds-n-ends because he wanted to show them to the bugs in his bug books, which he has named Chloe and Liam, after “Gnome Alone.” 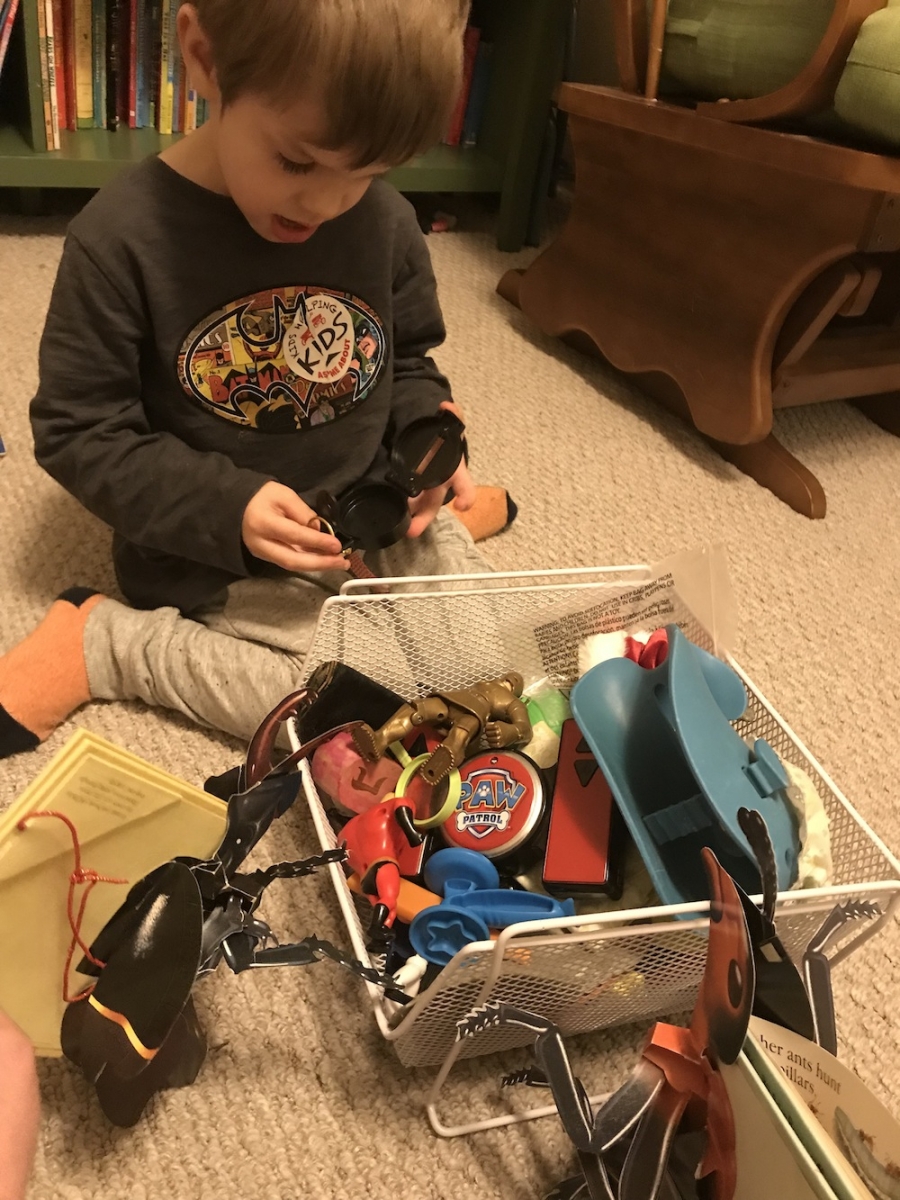 Ulterior motives or not, I love 1) that he gets fully immersed in having conversations with inanimate objects and 2) that he really seemed excited to show his “friends” his treasures.

Again, not that it’s easy 100% of the time, but Joss is usually ready to go along with whatever activity I suggest, for which I am very grateful! From baking a Howard Moon Moon Cake (I know, it’s the stuff of nightmares!) to browsing at Just Between Friends, Joss has always been an A+ adventure buddy. Whenever I ask, “Do you want to go home, or do you want to go [someplace else]?” His answer is always, “Someplace else!” 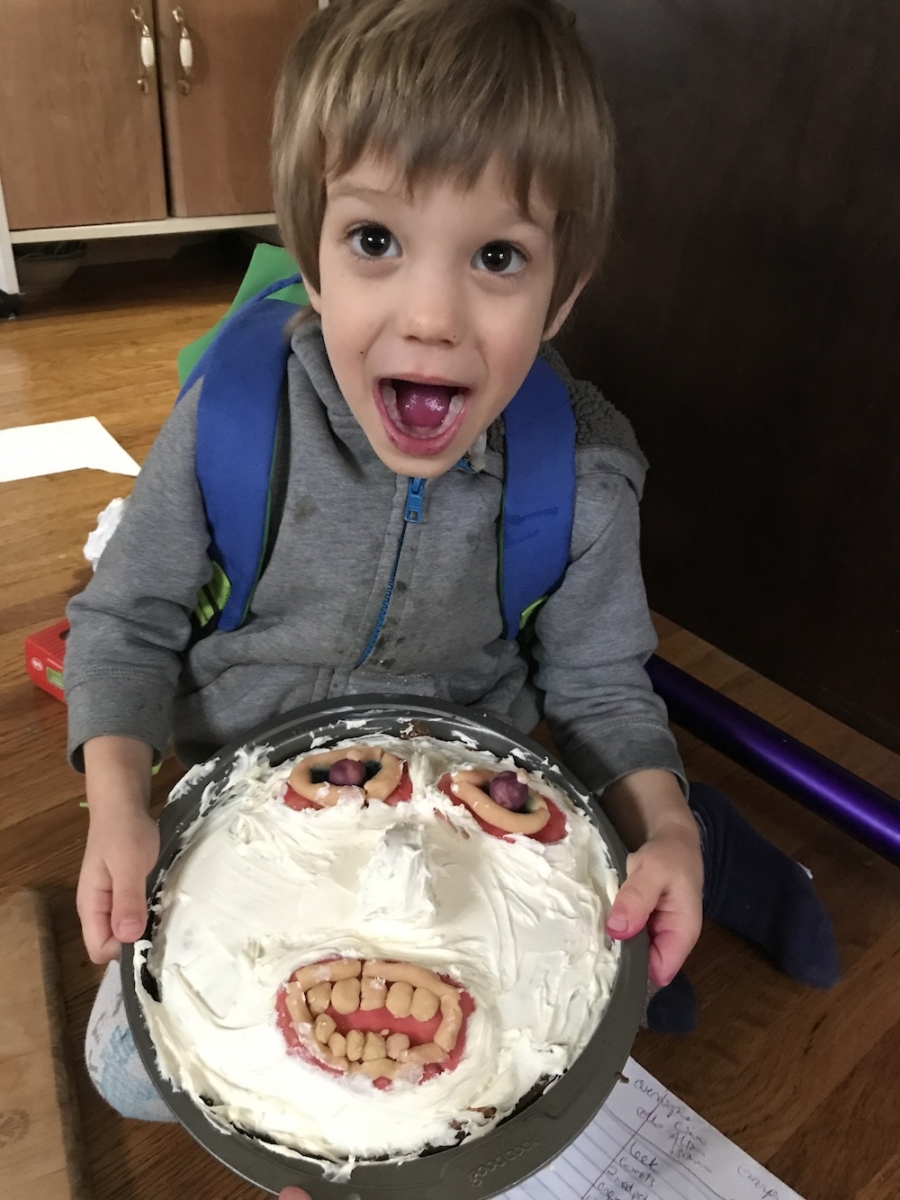 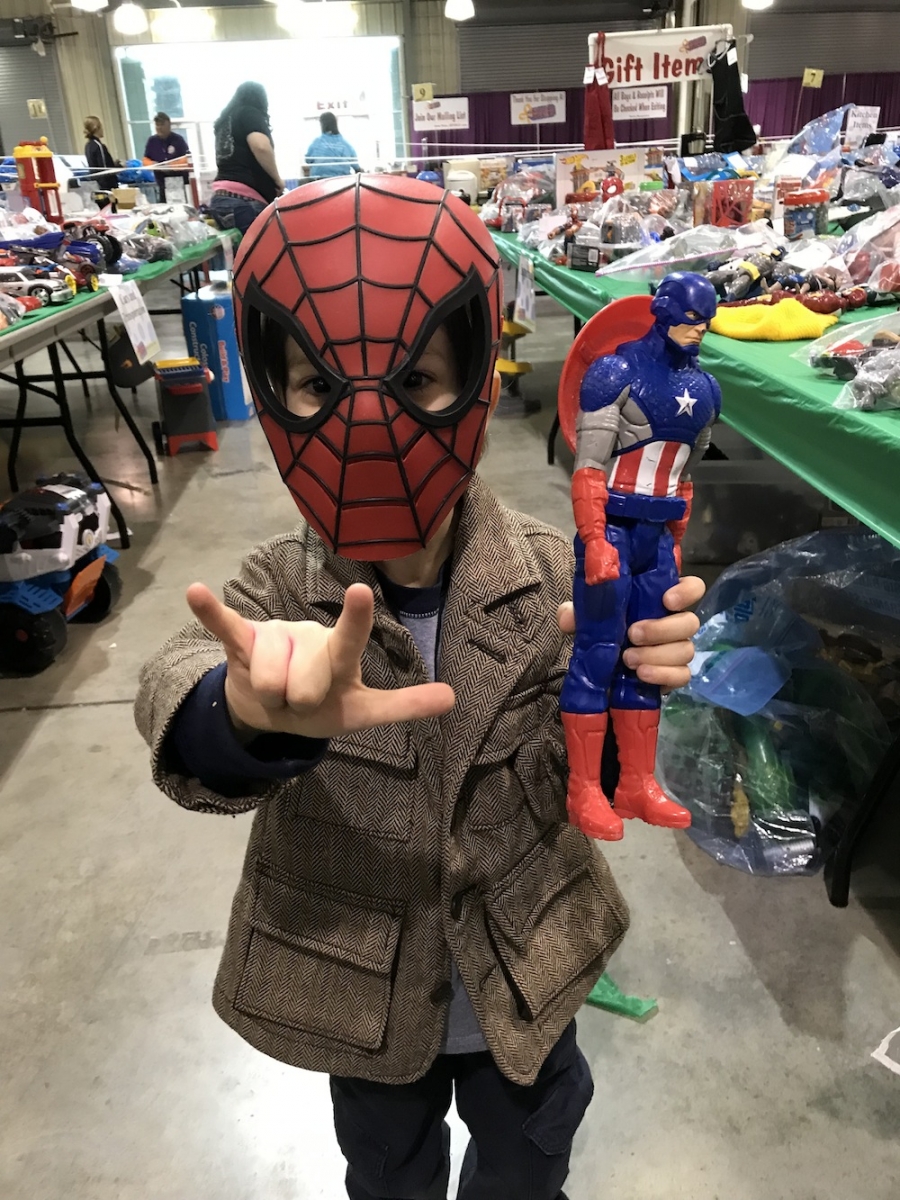 4. His interest in pop culture

It’s so much fun to be able to share some of our favorite things with Joss–or at least to be out of the stage where he thinks Little Baby Bum is the be-all-end-all in entertainment. Recently, we’ve been watching Steven Universe and The Dragon Prince, both shows that I really enjoy, and Joss does as well (although he’d rather watch Teen Titans Go! than Steven Universe, but we compromise 🙂

This doesn’t always work out in my favor–he’s a huge fan of Despicable Me 3, with the result that I’ve spent a few afternoons tearing up my vocal chords in a futile attempt to imitate Steve Carey as Gru/Dru. Over the past few months, he’s demanded to be called Rayla (from The Dragon Prince), Sally (from Nightmare Before Christmas), Gekko (from PJ Masks) and more.

I know we probably have too much after-school screen time, but as someone who was pretty clueless as far as pop-culture goes (I don’t remember if I ever heard a Hanson song until college!), I do kind of like being able to tell myself that maybe Joss won’t be quite so naive in that way, and it will be easier for him to talk to people who are “in the know.” But mainly, it’s just fun to be find things we can enjoy together. 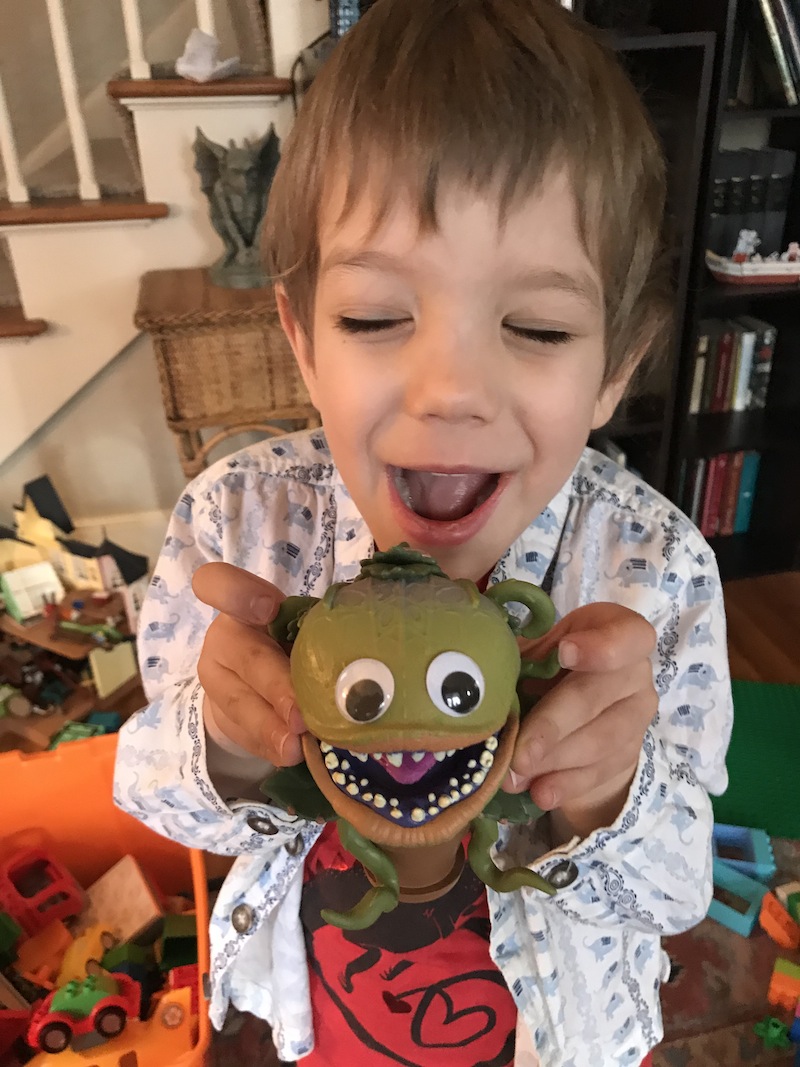 He’s never seen “Little Shop of Horrors,” but he does know that this little monster is named “Audrey.” He loves it.

5. His imagination, creativity and curiosity

I kind of touched on this in the previous section, but not only does Joss pretend to be characters from books or TV shows, he also regularly pretends to be a baby kitty, a little pup, even a baby egg. He also has begun showing more of an interest in the natural world, no doubt thanks to his nature classes at school. Like the previously mentioned bug books, and he also has a favorite book about Butterflies at school. He hasn’t really gotten deep into a “phase” yet–but I feel like we may be on the verge of a bug phase, which is fine by me! 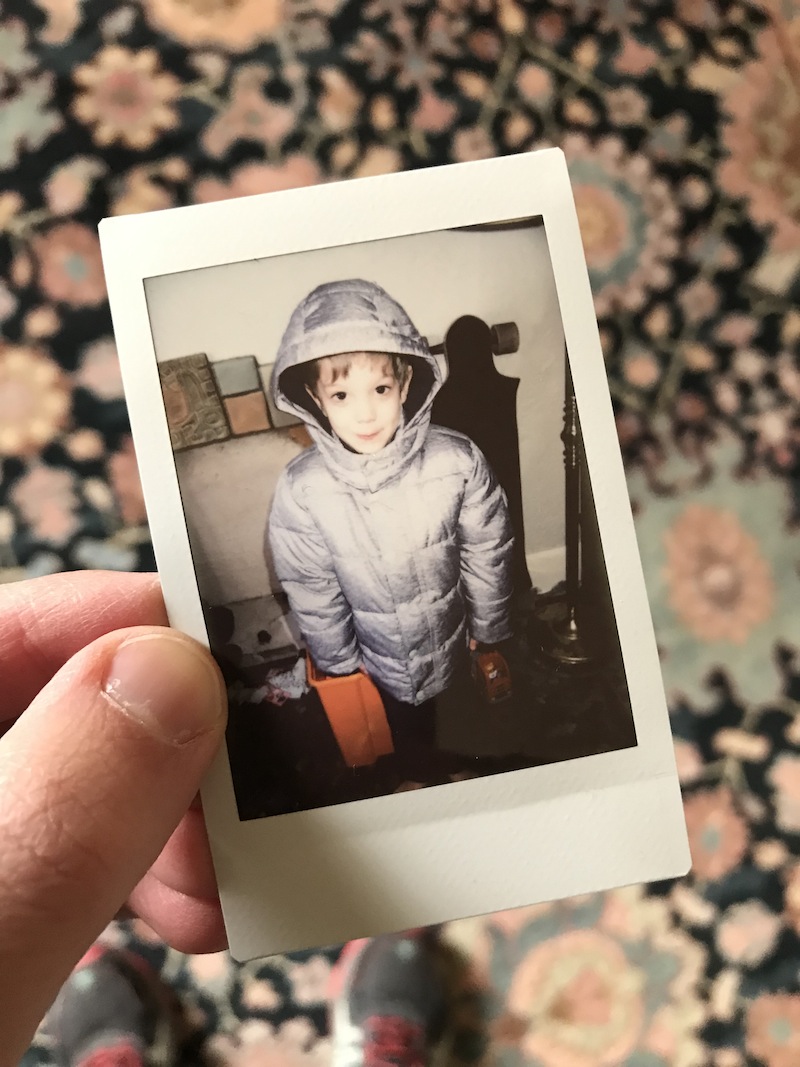 Joss wanted me to take this picture of him “being milkweed.”

He loves learning; I’ve said it before, but one of my favorite things about his school is his Hebrew classes, in which he learns words and cultural practicses that I’ve never heard of before. He’ll try to convince me to sing one of his Hebrew songs, and when I say, “I can’t, I don’t know the words,” he’ll respond, “Of course you do!” He also has started making up “Spanish” words, rattling off some nonsense and then informing us it’s the Spanish word for cat or something. 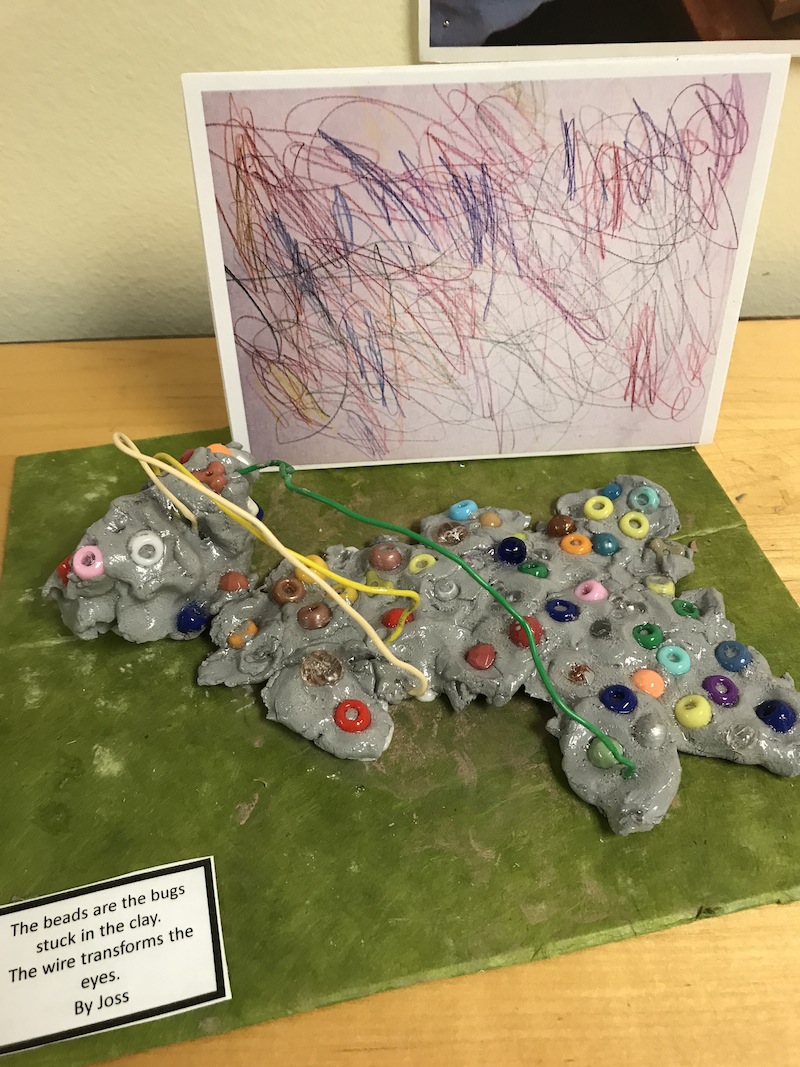 This is all probably exactly what I’ve said in previous brag-about-Joss posts, but it is a great joy to get to watch these traits develop and deepen, and I am looking forward to having a four-year-old Joss, even if I’m tempted to cry out at every birthday, “How are you this old already?!” 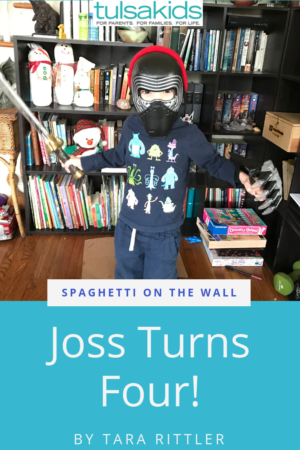