Fantastic Beasts: The Crimes of Grindelwald

I probably squealed out loud when TulsaKids editor Betty Casey forwarded me a media invite to a Tuesday morning screening of Fantastic Beasts: The Crimes of Grindelwald–a whole 2-3 days before the film’s release! (The official release date is Friday, November 16, but looking at the AMC website, it looks like there are Thursday showings. So I’m confused!) I had been vaguely wondering if I cared enough to spring for a babysitter for this one or if, as I did for the previous Fantastic Beasts installment, I’d just grit my teeth and wait till its release to Amazon Prime streaming, maybe inviting a few friends over so we could all enjoy it together. But this?! Joss would already be in school–problem solved! Again with the squealing 🙂

I’ve written about Harry Potter in at least one previous post, so you may already know that I’m a fan; however, I’m not as invested in Fantastic Beasts, obviously, since it is a new franchise and many of these characters weren’t a significant part of my childhood. But I had already been listening to Mugglecast, a Harry Potter podcast, hoping to get hints about the new film from podcast hosts discussing/speculating on the various Fantastic Beasts trailers. In fact, I am currently listening to their November 12, episode, which is all about Crimes of Grindelwald Predictions–now that I’ve seen the film, I’m excited to see how much their predictions line up with the actual plot, muhahaha 🙂

When I say this post is spoiler-free, I’m not including hints dropped in trailers. So if you want to know LITERALLY NOTHING about the film going in, don’t read this post!

The final trailer for Fantastic Beasts: The Crimes of Grindelwald

So speaking of podcasts, I may have mentioned before that my very favorite Harry Potter podcast is Oh Witch, Please!, which looks at the series from a feminist scholar perspective. It is currently in its final series, although it has been put on hold for awhile as the hosts attend to other life events, so I am really looking forward to hearing what they have to say about the new Fantastic Beasts movie! One thing about Witch, Please: While it is in many ways a celebration of the Harry Potter universe, it is also very critical of it; in particular, J.K. Rowling’s representations of magical races, her lack of representation of diverse characters, instances of cultural appropriation, etc. For this reason, and because there has already been controversy over Crimes of Grindelwald’s casting of Claudia Kim as the mysterious and tragic Nagini, I really hesitate to give a whole-hearted thumbs up to the film (not to mention the controversy over Johnny Depp’s continued presence in the series). I’m not a highly trained scholar, and I know there have been many instances of poor representation in books and movies I’ve seen in the past that I probably haven’t even recognized, but this seems to be an ongoing and unresolved flaw of the Harry Potter/Fantastic Beasts franchise. Sigh. 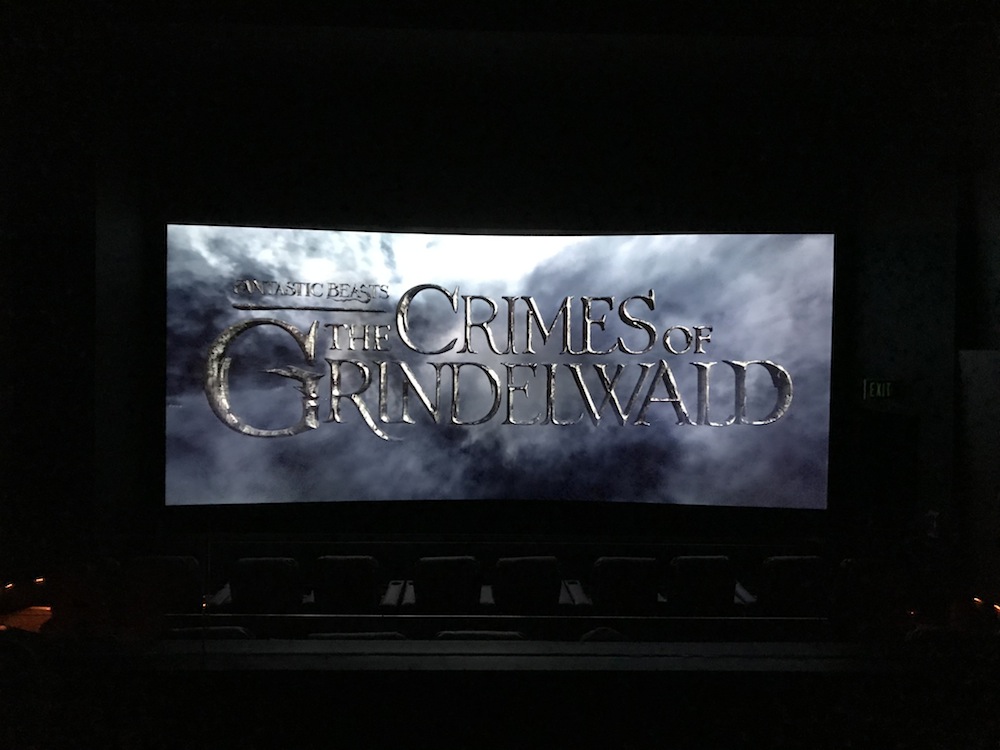 That said…for better or worse, I’m not naturally a highly critical person, so I did enjoy the movie! From the very beginning, it was intense! One nice thing about attending a film in a nearly-empty theater is that it’s easier to react to what you’re seeing on screen. I shook my fist several times, groaned in frustration, cheered (almost) silently, etc. There are some beautiful new beasts–I would not be sad to see an entire film set inside Newt’s magical suitcase!–some painful moments of petty cruelty–moments of tragedy–and a tear-jerking reconciliation.

If you’ve seen the trailers/movie posters, it will come as no surprise that a main theme of the movie is choosing sides–what arguments might persuade a person to join forces with someone they know is evil? Or to what lengths would you go to be with or protect someone you love?

Sorry this is a very rambly post. Without being spoiler-y, I don’t know what all to say! But I do love Newt’s character. Dumbledore mentions to him at some point (this is in a trailer) that he is putting his trust in Newt because Newt doesn’t desire power; he acts based on what he believes is right. He is almost painfully awkward at times, but you never question his compassion, humility, or sense of justice. In a trailer, a character tells Newt, “You’ve never met a beast you couldn’t love.” This reminds me of what I read in “Just Mercy,” a book about our criminal justice system: that a person is more than the worst thing they’ve ever done. And Newt understands that. But this doesn’t mean he doesn’t have a backbone and won’t stand up to injustice.

One final note, I had an hour to kill before the movie began at 10 a.m., so hung out in Barnes and Noble doing work on my laptop and drinking a peppermint mocha 😉 In the Starbucks area, they had a ton of Harry Potter candy…so if you’re going to be sneaking candy into Fantastic Beasts at AMC (not that I’m advocating for this), this might be a fun place to pick up a pack of Jelly Slugs, a chocolate frog, etc. 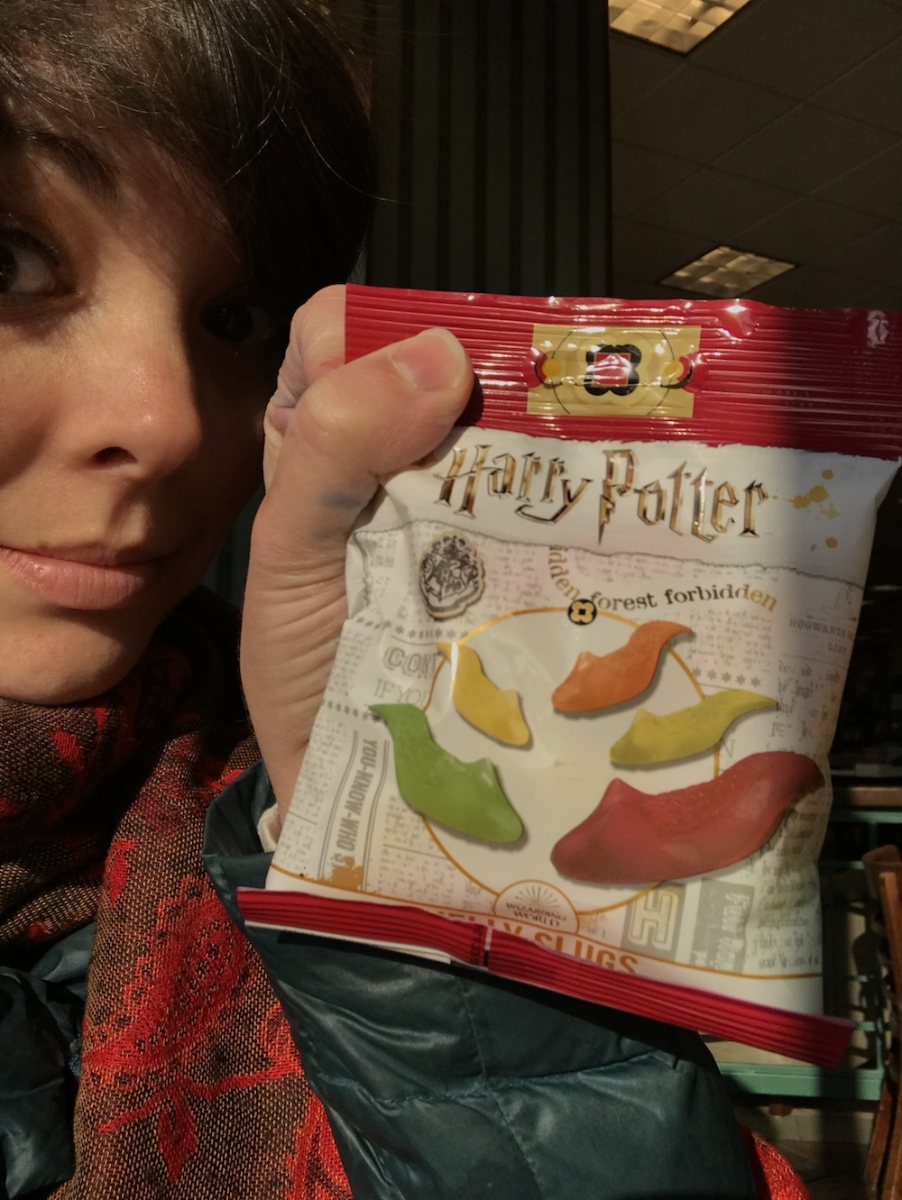 The pear-flavored ones are super weird!

If you see the movie, please let me know what you think! And remember, keep it spoiler-free because there are some incredible reveals!