Does New Board Member Have a Conflict of Interest?

A group of TPS parents and District constituents have lodged a formal grievance against seating newly elected Tulsa Board of Education member Judith Barba, who was elected last week to represent District 2. Barba’s official seating will be at 4 p.m. today at a special meeting of the Board. Members of the public may access the meeting via zoom, but they cannot make comments.

The parents’ grievance states that Ms. Barba’s employment with Growing Together Tulsa presents a direct conflict of interest to Tulsa Public Schools Board Policy 1102.

I do not know Ms. Barba, but I do feel that Board members should be free of any hint of conflict of interest. Ms. Barba was also funded by not only individuals who work for Growing Together, but also individuals connected to the George Kaiser Family Foundation, the Schusterman Foundation, the Lobeck Taylor Foundation and Impact Tulsa, according to Ms. Barba’s Monetary Contributions report. Those entities all have interest in the implementation and success of Growing Together Tulsa. So, will Ms. Barba recuse herself on votes connected to programs and interests of Growing Together? And, if she does, how will she be able to honestly represent her constituents?

Having a Latinx Board member is long overdue. That representation has been lacking, but that Board member should be free to vote without the cloud of a conflict of interest hanging over her.

I would also like to say that Ms. Barba’s opponents were also “historic,” as I’ve heard Ms. Barba’s election called. Theresa Hinman is Native American. She started a citizen’s group to advocate for Native students. She has worked tirelessly, not only in Tulsa, but statewide and beyond to speak for the interests and inclusiveness of Native students.

Marsha Campbell, Ms. Barba’s other opponent, is Black. She is a former McLain High School teacher. She could hit the ground running in terms of knowing her district as well as public school policy. At a time when schools are closing and neighborhoods are losing the community connections that used to happen, Ms. Campbell could bring a wealth of experience, knowledge and understanding to a Board position.

Before the election, the Tulsa Classroom Teachers Association had a forum featuring all the candidates for this election, and for the District 3 election on April 3. Ms. Campbell and Ms. Hinman exhibited their deep, long-time ties to the district. They had thoughtful and complex answers to complex questions that schools are dealing with today, from racial inequities to the District’s problems with IEPs. Ms. Barba’s answers were just not as complete, and that had nothing to do with the language barrier since she had a translator. I have no doubt she would be a valuable liaison with Latinx students and their families, but isn’t she already doing that in her position with Growing Together?

The election of any one of these three women would be historic. Unfortunately, the least qualified and the most compromised was elected. 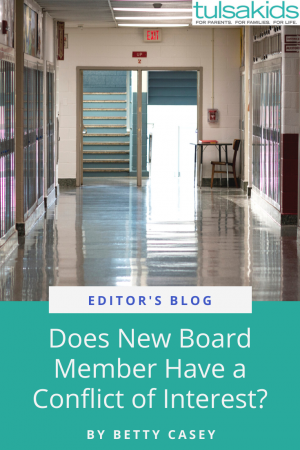 Make Memories at the Library

Writing a Children’s Picture Book: What Choices Would You Make?

Betty Casey has been editor of TulsaKids for over 20 years – her youngest child was 3-years-old when she started working for the magazine. She and her husband Wes have three young adult children. Betty’s blog ranges from writing about current issues or information of interest to local parents, reflecting on her life without kids at home, and posting a few recipes now and then. (Cooking and running are two or her favorite past-times.) Betty is the author/illustrator of three children’s books, "May Finds Her Way," "That is a Hat" and "The Prince of the Prairie" (The RoadRunner Press). She was named Blogger of the Year in 2014 by The Great Plains Journalism Awards, was a finalist in 2015 and won again in 2016. Most recently, she was named the 2017 News Blogger of the Year. She has also won numerous writing awards from the Parenting Media Association.

Make Memories at the Library

Does New Board Member Have a Conflict of Interest?

Writing a Children’s Picture Book: What Choices Would You Make?

Saying Good-bye to My Best Friend